According to Text Messages, Trifecta Coordinated with IHOP During 2017 CrossFit Games 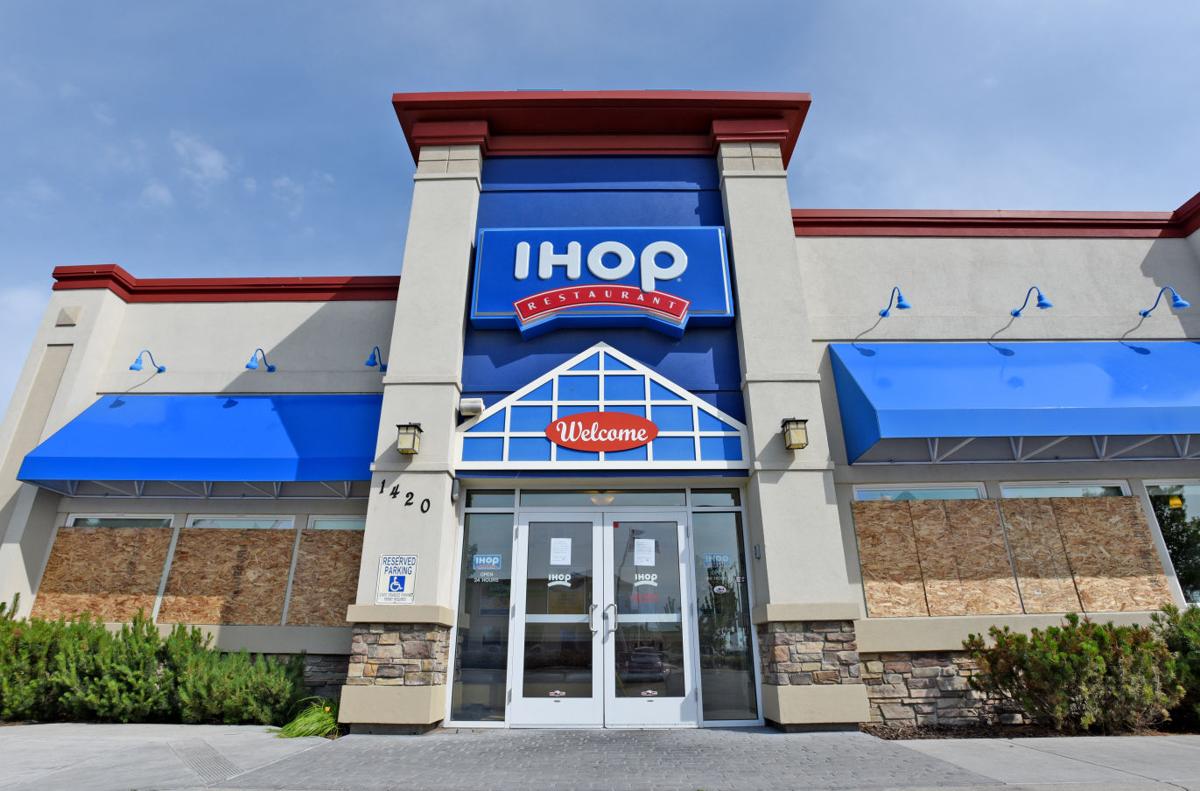 Last week, we shared news that two former employees had brought a 141-page lawsuit against Trifecta alleging that Trifecta sourced food for the 2017 CrossFit Games from other restaurants and passed it off as their own.

It’s worth noting that this lawsuit coincidentally was filed on July 18th, and first made it’s way into the press on July 26th, just a week before the CrossFit Games is set to begin.

Trifecta currently is the official food sponsor of the CrossFit Games. They will have a booth at this year’s Games and according to Trifecta counsel, “Trifecta will be providing the raw uncooked food to Centerplate who will be cooking it at their onsite kitchen to be served to the CrossFit staff.”

Here’s what we know.

So who are these two former employees?

Jodi Charter and Scott Cooper, who were both fired on August 14, 2017, just a week after the 2017 CrossFit Games. Scott was hired July 1, 2016 and was formerly the marketing manager. He also holds a minority ownership in Trifecta (50,000 shares). Jodi was hired in September 2017, as a “Social Media & Marketing Intern” then promoted to full-time around May 2017.

According to the lawsuit, both employees had received promotions days prior to being fired. Both former employees are seeking monetary damages in excess of $80,000 each.

What does the lawsuit allege?

At 141 pages total there’s a lot to unpack, but here are a few relevant sections:

“Beginning weeks prior to the CrossFit event, Defendant Liz Connolly contacted fast food and chain restaurants in and around the locale of the CrossFit Games venue and made arrangements with them to ‘create food in a Trifecta style.’ Defendant Liz Connolly made arrangements with IHOP, a local BBQ shack, and a Mexican restaurant, among others, as well as sourcing McDonalds hamburger buns for use with various meals. Without disclosure to CrossFit or its competitors, fitness professionals and attendees, Defendants made the arrangements to, and did in fact, serve fast food and chain restaurant food and explicitly passed it off as Trifecta food.” 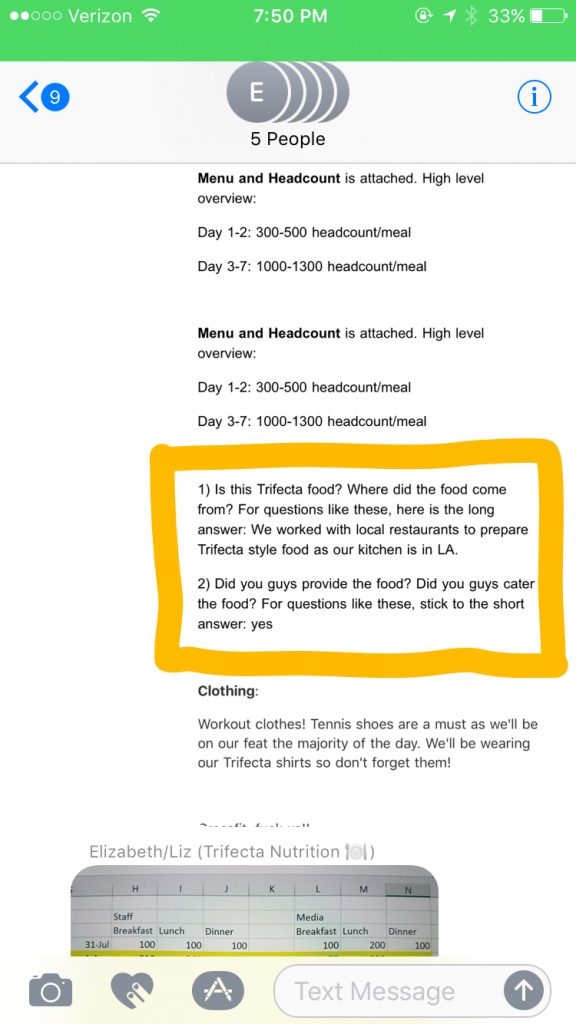 “Throughout each day, Defendants specifically arranged for IHOP and other local restaurants to deliver food to the CrossFit venue in unmarked vans so no one would see Trifecta staff receiving food from other sources, and to ensure Defendants could fraudulently pass off without detection all the food as Defendant Trifecta’s. Trifecta employees, contractors and representatives were continuously instructed to tell inquiring patrons that “we have had a local kitchen prepare our food in a Trifecta style” so as to allow Defendants to escape detection. In one particular instance, Defendant Greg Connolly served CrossFit participants pulled pork from one of the outside restaurant chaffers and knowingly and intentionally deceived and falsely stated ‘This is our [Trifecta’s] 14 hour pulled pork! We smoked it for 14 hours and watched the meat fall off the bone! It’s delicious!’ Plaintiff Thornton stood next to and witnessed directly Defendant Greg Connolly making the false representations about the origin, source and quality of the pork. Plaintiff Thornton not only was surprised and disturbed by the misrepresentations, but also at a loss because Defendant Trifecta did not and had never even offered or served pork as part of its meals.” 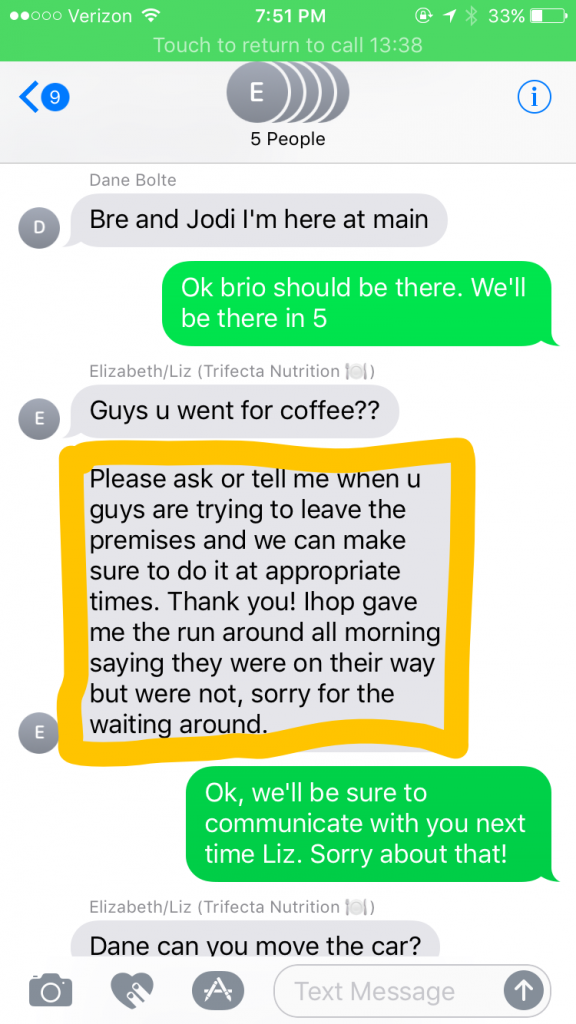 And here again in this two-part conversation. 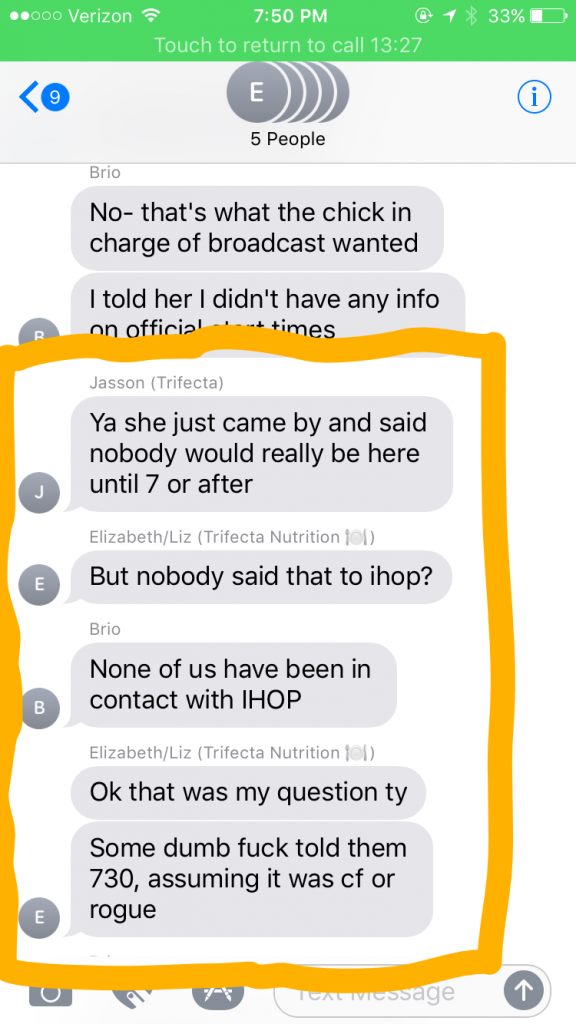 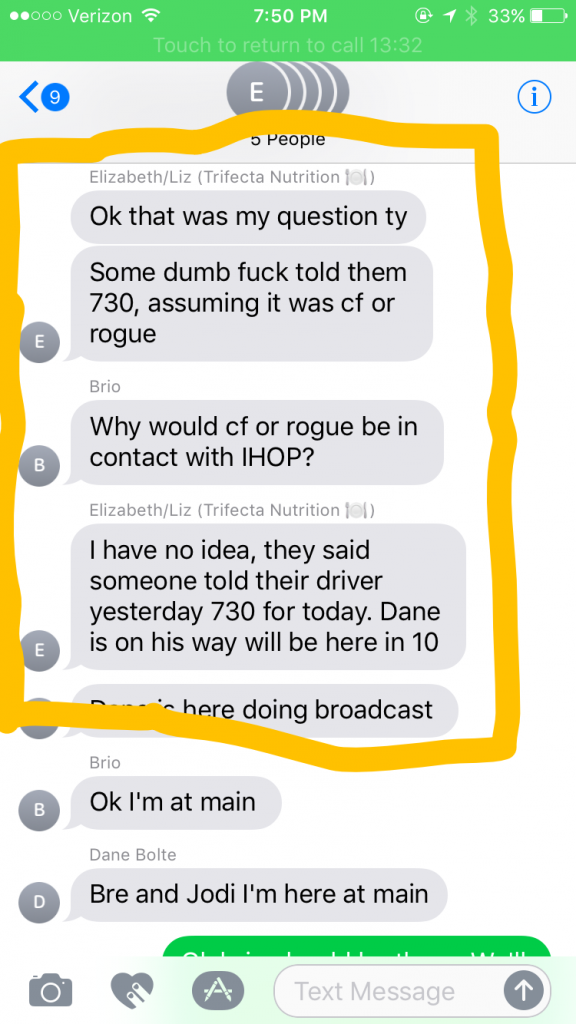 We do not yet know what specifically they were coordinating with IHOP, but it does appear that Trifecta staff were expecting a delivery of some kind.

What does Trifecta have to say about this?

Trifecta strongly denies the veracity of many of these claims from “two disgruntled fired employees.” In a previous statement they said, “Trifecta strongly opposes the allegations and claims present in the underlying lawsuit.  While we cannot discuss the details of pending litigation nor provide specifics regarding the alleged claims at this time, we look forward to correcting the record regarding the salacious and misguided claims brought by these two disgruntled fired employees.”

Trifecta was unwilling to disclose what specific restaurants where they sourced food.