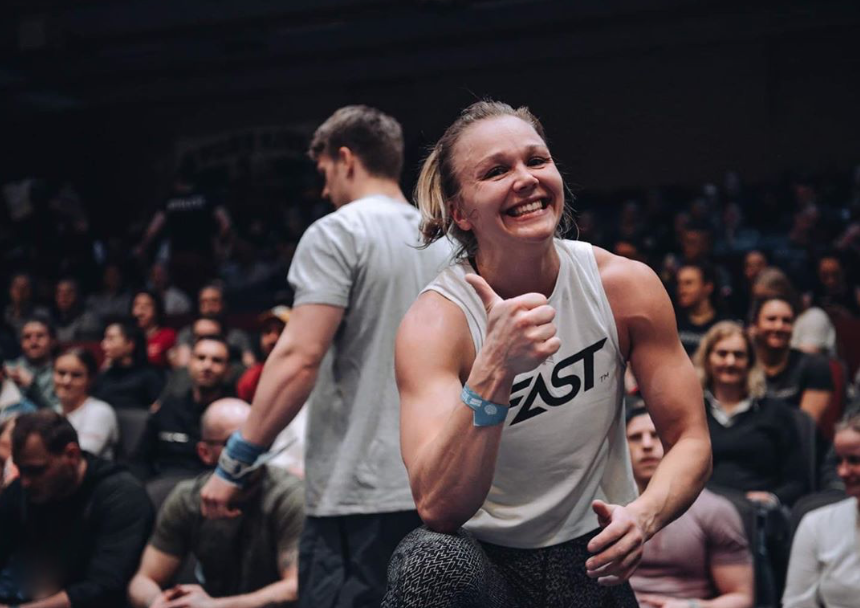 Fourteen countries will be represented in the women’s field of the 2020 CrossFit Games on September 18-19. The athletes representing their countries outside the United States are filled with the usual suspects: Toomey, Sigmundsdottir, Briggs and Saunders. Look closely and you will see a name that doesn’t quite jump out at you in terms of Games notoriety but rather in its uniqueness. Sanna Venäläinen, a 29-year old from Finland will be competing in her first ever Games this week. How she got her name included amongst the greats of the sport is through hard work, determination and hope.

Remind me: Over the last two years, Scandinavian countries have been well represented at the Games. Norway’s Kristin Holte has been a perennial top-ten finisher the last three years culminating with her runner-up finish at last year’s Games and Camilla Salomonsson Hellman is appearing in her third-straight Games as an individual representing Sweden.

For Finland, a country that produced CrossFit great Mikko Salo and has seen Jonne Koski make his mark in the sport over the years, the women have not progressed like their neighboring countries. Emilia Leppanen made the Games last year as a national champion and finished a respectable 55th. She repeated again as national champion this season but saw her chances of representing her country taken away by the pandemic.

Enter Venäläine, Finland’s three-time second “Fittest”, who will be making her very first Games appearance. She doesn’t have the CrossFit resume of Leppanen but nevertheless the physical education teacher has competed at a high level. In 2018 she placed 17th in the Europe Regional.

Enter 2020: Venäläinen earned her Games ticket after placing third at the Norwegian CrossFit Championship in February. She was able to hold-off a hard-charging Jacqueline Dahlstrom and went back-and-forth on the final day of competition to earn the Games invitation by seven points. It was her first career podium finish at a Sanctional, thanks in part to four top-five finishes including an event win.

Path to the “Live Five”: Scandinavian athletes are known for their engine and typically thrive in high-cardio workouts, specifically running. Venäläinen is no different as she prefers the Games-style workouts over the Open workouts which will not help her in the online stage of the Games.

She also thrives in workouts that include bodyweight gymnastics, specifically ring muscle-ups and handstand push-ups.

Her lone event win at the NCC was in an event that featured eight rounds of four ring muscle-ups which she completed in 4:07.

At the 2018 Regionals, her best event finish was in workout three which had ring muscle-ups, an obstacle handstand walk and pistols. She placed ninth in that event.

She struggles in workouts that involve overhead barbell movements especially snatches. Her one-rep max snatch is just 170 LBs. Event four of 2018 Regionals had a combination of snatches and burpees, Venäläinen placed 37th in that event as she had difficulty with the reps of 125 LB snatches.

Workouts that have burpees also appear to give Venäläinen trouble. Her worst finish in this year’s Open was in 20.1 when she placed 856th in a 10-round ground-to-overhead and burpees-over-the-bar couplet.

by Morning Chalk Up
More About Sanna Venalainen