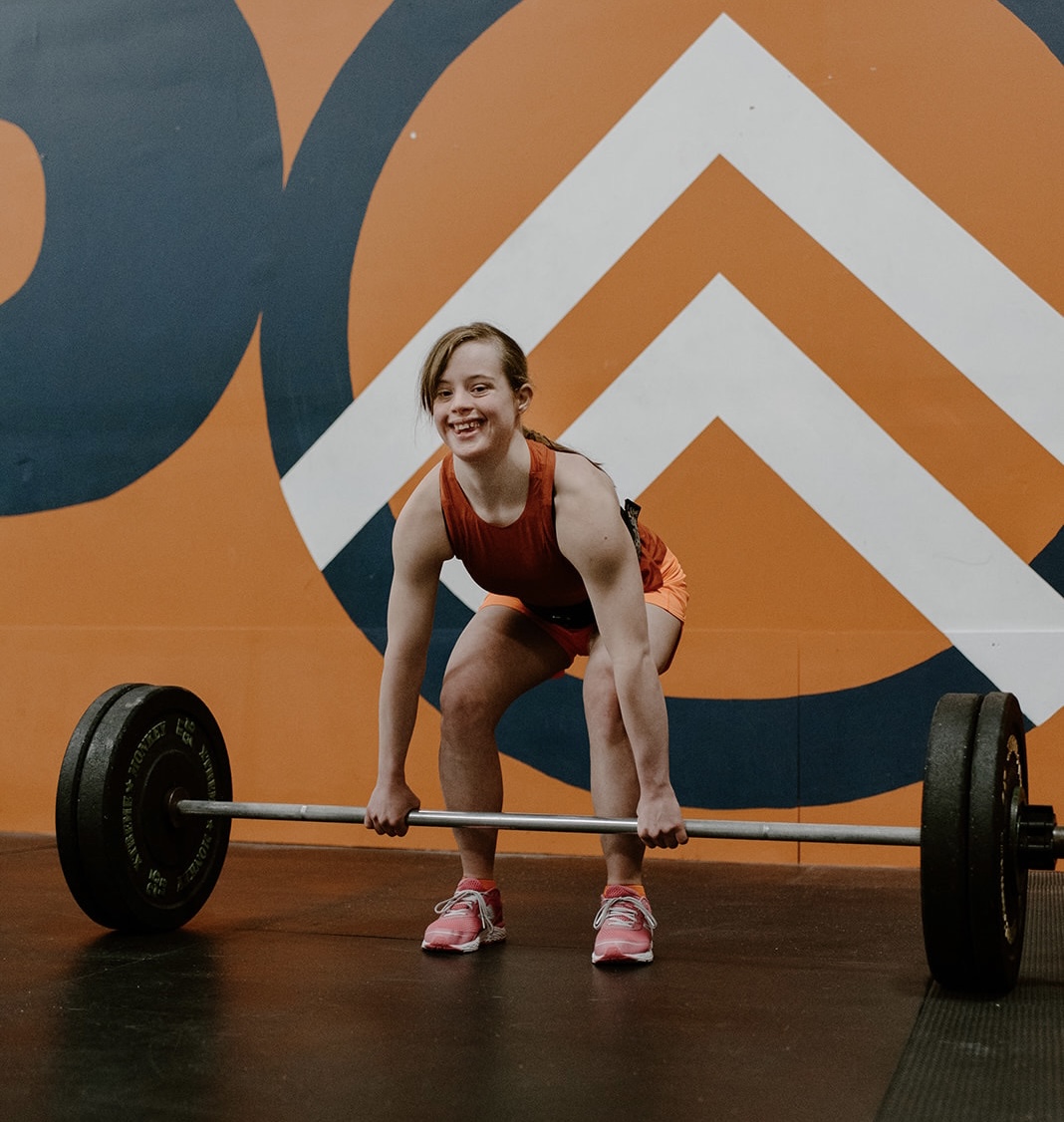 On the female side of the competition is Julia Lane (down syndrome diagnosis), competing out of All Levels CrossFit (Windsor, ON). Julia has been training Crossfit for 4 years and started thanks to her swimming coach encouraging her to become stronger. Her father credited CrossFit for her decorated swim career saying: “Once Julia joined the gym and started working with the coaches was when she started dropping seconds off her time, because she was physically fit, and that’s when she started setting world records.” As of now, Julia holds 7 world records in swimming.

Julia isn’t just a stand-out athlete in the water, she’s also currently 2nd worldwide heading into the CrossFit semifinals and won her division of the CrossFit Open last year. When asked what her future CrossFit goals are, she responded: “winning the CrossFit Games.”

Julia is also a true fan and lover of the sport. “I feel excited when my family is proud of me, and I always try my best all the time. I love what my life is now and that I get to do this.” Julia isn’t the only adaptive athlete at the gym; there are 8 others (all neurodivergent with DS or ASD). Julia said: “We work out together a lot”, and also noted that the athletes are all friends.

Julia’s coach, John Mack, spoke of the gym’s adaptive program saying: “For us as a gym, inclusion is one of our core values. It [inclusion] has to come from the top. Not just as a staff, but as a gym, so it involves everyone in our community.” Julia’s mom expanded on this: “It’s real inclusion. It’s not just a set time, she goes to classes on her own with neurotypical athletes.” John also spoke of how the gym hasn’t just helped Julia, but Julia has helped to shift his perspective of what is possible: “We didn’t challenge the [adaptive] athletes enough, we were too afraid to put a heavy weight in front of them, and then Julia was like I can do that!” He noted that his daughter also looks up to Julia, saying that she “wants to be able to swim like Julia.”

Outside of her many athletic accomplishments, Julia is also a college student (graduating this Summer) and enjoys cooking and dancing. Julia’s mom said: “she’s always dancing”, John laughed: “after a hard workout, then it’s time to dance!” Julia is currently prepping for the semifinals and enjoying every minute of it.

Another example of a competitive athlete in the intellectual disability division in the CrossFit Open is Lance King (1st worldwide). Lance trains out of Adventure Awaits CrossFit (Schofield, WI), and has been training in CrossFit since January of 2015. He found CrossFit through his brother, Kyle, who was looking to help bridge the transition between high school sports and life-long physical activity.

Lance has stuck with it ever since and trains regularly in the classes at the affiliate. He also regularly participates in the CrossFit Open. Lance said: “Even if I don’t sign-up, I do the workouts.” Before the adaptive divisions, Lance competed in the male RX category against his brother. Lance reflected on this time, and even cited it as one of his favorite CrossFit memories: “It was always fun, even if he got the best of me.”

Lance and Kyle would participate in Friday night lights, and one year headed into the final 5th week tied 2-2. Right after the last event, the brothers met in celebratory hugs. When asked what he enjoyed most about the Open Lance responded: “Everything!” Lance has been self-driven from the start. He said: “I always push myself and also try to make the best of myself.” Kyle spoke on this saying: “I can pretty much say that’s all within him. [...] We’ve always encouraged him, but not to the point of competing to be the best, but to compete to find joy out of.”

Competing simply for the joy of competition has worked well for Lance, with a first-place finish worldwide in the 2022 Open for his division, and hasn’t dampened his competitive spirit. His future goal for Crossfit is? “To be the fittest CrossFit athlete on earth.”

Researchers collaborating with the Adaptive Training Academy are dedicated to creating an inclusive community for training, competition, and life. In the following weeks there will be a brand new training certification released to increase coaching capacity to work with cognitive adaptive athletes.