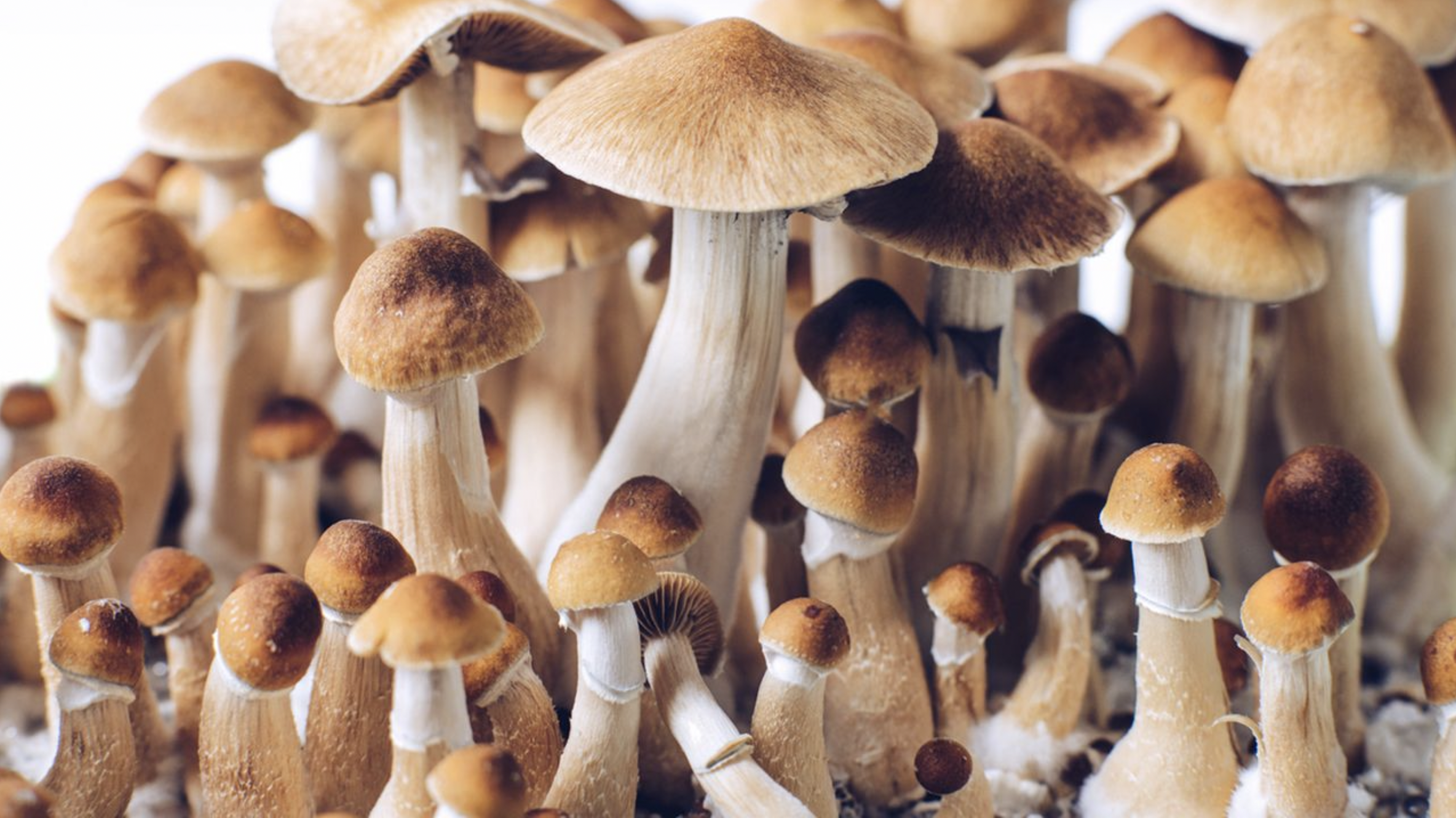 On the Morning Chalk-Up page, you might have seen an article entitled: "Microdosing Mushrooms: Athlete Perspectives on the Psychedelic Supplement." The article outlines how CrossFit Games' athlete, Sam Dancer, has utilized mushrooms to help his athletic career. The article also outlines other athletes who report being able to learn new skills more quickly and see additional benefits from mushrooms.

Here's the thing. Mushrooms, aka Shrooms, are serotonergic psychedelics. That means this drug is creating its effect on the human brain and body through the neurotransmitter serotonin. Serotonin affects a whole bunch of stuff in your daily experience of life (i.e., mood, sleep, digestion, etc.). It's also known as a "happy" drug. We see lower levels of serotonin in disorders such as depression and anxiety.

Getting back to shrooms, this psychedelic has been shown to increase learning capacity. It is theorized this is by an increase in neural plasticity (your brain's ability to create new connections and learn new things). So, yes. Athletes will see a benefit from taking this substance. Research has proposed using psychedelic-assisted psychotherapy for elite athletes (Walton & Liknaitzky, 2022) to address mental health issues at this performance level. Empirical work has also highlighted the potential erogenic effects the psychedelics may have (Machek, 2019). Importantly, this study references how serotonergic psychedelics can help increase pain tolerance in athletes and possibly increase molecular exercise adaptations.

Interestingly, your neurotransmitters are also heavily tied with exercise fatigue (and body temperature regulation during exercise, but that's a different article). More specifically, we've seen studies where exercise fatigue was directly correlated with serotonin levels (D'Amico et al., 2015). This study found that the more serotonin there was, the faster the athletes reached fatigue. This is because (theoretically) serotonin reduces the excitability of motor units (a motor unit is the motor neuron and all the muscle fibers it innervates). When this excitability is decreased, the muscle cannot be activated as often or produce as great of force.

Research has also shown that increasing serotonin levels decrease power output during exercise (Roelands et al., 2013). An interesting observation from the Roelands study was that when participants had an increase in serotonin in their brains, they could not correctly pace a workout (i.e., go at a sprint pace without any energy regulation). This suggests that serotonin may play a key role in pacing strategies and how we perceive our efforts during exercise.

To be honest, there's not a lot of research on the use of psychedelics and athletes. Moreover, there are not a lot of consistent findings within research about neurotransmitters and exercise fatigue. In general, there are a lot of missing pieces, and no one really knows what's happening. Most of the research is done on animals or microscopic levels. Applied psychedelic research has become increasingly popular in psychological disorders (Agin-Liebs et al., 2022; Griffiths et al., 2016; Grob et al., 2022; Hesselgrave et al., 2021), but it'll most likely be a while before we see the kinesiologist and exercise scientists pursuing this research at full speed.

My suggestion to anyone wanting to try microdosing would be to become your own scientist. If you're considering doing shrooms for your athletic benefit, you're probably already keeping a gym journal or monitoring your progress in some way. I would run through a series of baseline tests (with emphasis on endurance and fatiguing anaerobic tests). What physiological and psychological side-effects and benefits are you experiencing?

I think that while shrooms or other serotonergic psychedelics can acutely increase exercise fatigue, they may produce long-term benefits. If you're learning faster, do you have to sustain energy longer? Suppose you're in a most positive mood state during your training. Doesn't that actually combat fatigue (see my other article, "Exploring The Athlete Experience of Pain Through The Lens of Interoception")?

All I'm saying is that there's a chance your unique brain chemistry thrives during exercise with a microdose, and there's also a chance you're royally screwed by it and don't see any physiological gains. Anyone interested in utilizing shrooms should collect some sort of data to gauge what's happening in their adaptations.

My recommendation as a neuro-geek (and dual Ph.D. student in neuroscience and human performance) and athlete would be to utilize shrooms when you've had a few years of training under your belt. The most significant benefit of psychedelics (according to empirical work) is increased neural plasticity (Davoudian et al., 2022; Jefsen et al., 2021; Shao et al., 2021). As a beginner in anything, you already have a lot of that plasticity stuff going on (see "rookie gains"). As your performance plateaus, I think you could see many benefits from microdosing and potentially learn at a faster rate.

I have already argued that a positive mood has many benefits for training (again, see my last article about the athlete's experience of pain and interoception). So, I would make the exception if you were a particularly moody athlete that psychedelics might benefit you even if you're still pretty new to the sport. But, I think utilizing any drug to change your mood has its downside. My first recommendation would be to (1) GO READ MY LAST ARTICLE and (2) emphasize mentality over physical development for a while. You'll not get anywhere as an athlete if your sunny personality is dependent on drugs. What if shrooms do become illegal for your sport? It would be best if you were independent of the drugs you use.

Now, hypothetically, if I were to use psilocybin as a sports performance enhancer...this is how I would do it.

First and foremost, I would only microdose. Going "full orbital" (aka doing a big dose and having a full-on trip) only benefits psychological realms. Also, if serotonin affects exercise fatigue, as the literature suggests, it's not physiologically beneficial to have significantly increased serotonin. I would cycle on and off microdosing every three days, using a dosage of 0.1 g (of dried mushrooms). This is a common microdose scheme and reduces the chance of building up a tolerance.

Next, I would emphasize my holistic health. I can't tell what effect psilocybin has on my training if I'm not taking care of myself in other realms of my life. I would emphasize sleep and diet to ensure I was recovering and allowing my body to adapt. I would journal my intentions each day to ensure that while I'm (theoretically) experiencing heightened neural plasticity, I'm practicing the movements correctly and focusing on my learning goals.

For data, I would track the routine gym stuff (i.e., 1 RMs and time trials) to analyze my performance. I would also rate my mood and energy levels before, during, and after exercise. The psilocybin will likely affect my psyche as well, and I would be interested to see if, while I'm in a "good" mood, my energy levels are perceived as being higher (or if there is no correlation at all). Finally, I would plot this data by day category (i.e., day 1, day 2, day 3, or day 4). I would do this to see if there were any consistent trends per day category within my microdosing cycle. I want to know if my energy levels or strength numbers are higher on day one vs. day two or if my mood becomes more negative on day 3 when the psilocybin is out of my system.

This is just one approach. Another standard microdose cycle is every other week. I chose the three-day cycle so that I could consistently see how the psilocybin was interacting with my training. I think an interesting study would measure both cycle strategies' athletic benefits (if any) and see if one produces a more significant effect. I would also be interested in studying if psilocybin's most significant impact is learning-based (due to the increase in neural plasticity) or if something else is at play.

I hypothesize that if athletes reach a complete "flow-state" while using psilocybin, they are recruiting their muscles efficiently. The hyperfocused state that psilocybin produces might even be used in therapy to help athletes recruit underused muscles. If this were the case, muscle development could be increased outside of learning new motor patterns. Finally, I would be curious to explore the relationship seen previously with serotonin and pacing strategies. I think this should be a variable that is measured in any study utilizing serotonergic psychedelics in athlete performance. In theory, you could teach your body to sprint during workouts (as seen with the Roelands et al. study) and, in turn, be learning faulty pacing strategies. But who knows?

I think psychedelics will find their way into sports and athlete training sooner rather than later. If this is the case, research should explore their effects and potential use. If anything, to keep athletes safe and reduce any adverse outcomes that might be associated with the use of psychedelics.