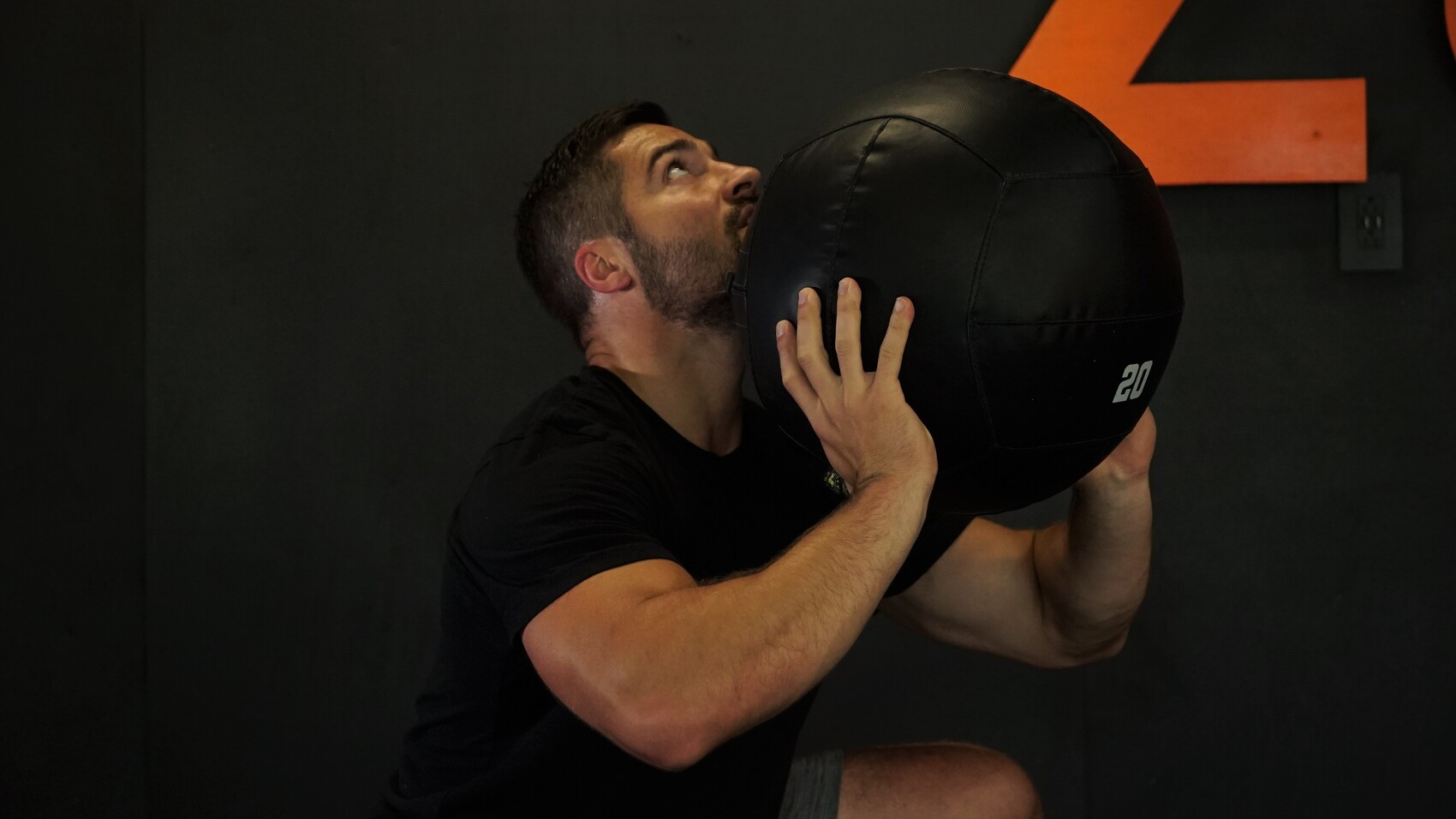 In this post I’ll take you through a mental model for assessing strengths and weaknesses for an athlete who competes in the Sport of CrossFit.

There are so many factors to look at in this sport that it can quickly become overwhelming and leave you feeling like you don’t know where to look first.

Let me help streamline your assessment process and follow the flow outlined here.

In coaching, the place to start is always with a conversation with the athlete.  You can learn so much by being genuinely curious and digging past the surface level answers to conversation that can yield a much better understanding of the athlete’s true desires.

In my opinion, it’s not the job of the coach to try to change what your athlete wants.

Rather, ask questions that require them to (1) think deeply and (2) make decisions for themselves.

At What Level Does The Athlete Want to Compete?

As a coach, it’s easy to lump all “competitors” into a single space in your mind.

However, not all athletes want to go to the Games, and not every athlete wants a life of balance.

Your first job is to find out how serious the athlete is about their goals.

How the athlete answers this question will determine how much “enjoyment” will be held as a priority in the program.

Personally, I’m not going to do 500 Wall Balls a week in “weakness training” because I don’t care to be a Games athlete, and I hold enjoyment in training and family time over joint pain and my “Karen” time.

Basically, how good do you want to be …knowing that there will be a positive correlation with the amount of sacrifice required to compete at that level?

Does the Athlete Have All the Necessary Skills to Compete at That Level?

When an athlete says they have X goal, the first thing I do is comb through their onboarding info and look how far they are from their goal.

For example, a 28 year old female starts 1-on-1 coaching with me and says she wants to qualify for a Semifinal “in the next year or two.”

But she hasn’t ever done a successful Bar Muscle-Up, and in all her training videos she is not even close to reaching depth on her pistols.

For an athlete who doesn’t have all the skills to compete at the level she aspires to, her program will heavily bias training these movements -in perpetuity- until she acquires the skill.

That means even if they gear up to compete, keeping doses of skill work in their program.

It is my strong belief that prioritizing cyclical & MetCon capacity before having all the skills you need is putting the horse before the cart.

A single muscle-up in Open 22.3 will result in her jumping approximately 16,000 places (17% of the field).  A similar increase in a rowing event could take years of stressful energy system training to achieve.

Do They Have Glaring Holes in Strength or Gymnastics Patterns?

Just because an athlete has the skills they need doesn’t mean they are refined, strong or enduring.

Likely, as you look at the athlete’s abilities in specific movements you’ll see obvious shortcomings...

○ She can back squat a house but can’t front squat well.

○ Her overhead mobility is awful and she can’t get into a good position for Handstand Walking, Jerks and Hanging Gymnastic movements.

○ She can do 27 Kipping Chest-to-Bars but only 4 Strict Pull-Ups.

○ Her seat is way too low on the Echo Bike.

Sometimes you’ll look like a wizard; one tweak and the athlete’s capacity is forever changed for the better. You move her seat up two notches and her legs stop blowing up on the bike and her 10:00 Test score jumps 23 calories.

Other times it requires a long training progression for small improvements.  For example, opening up her T-Spine for overhead movements after years of text neck left her in bad positions.

Is This Hole in Capacity or a Movement Quality Issue?

In this case, capacity means the athlete’s physiological ceiling.

And movement quality is how well they move from an energy conservation perspective.

The deadlift could be a look at hinging capacity to help troubleshoot a problematic power clean, for example.

Front squat to back squat ratio could shed light when troubleshooting heavy squats.

Often people see an issue like this and they want to get really creative in how they go about plugging that hole.

If you would just watch her bar-facing burpee test video, you’ll see she jumps from 18” behind the bar on every rep…no wonder she is exhausted after 30 reps and everything gets sloppy after that.

What If There is No Clear Movement Quality Problems?

I would probably doubt it, but if this is actually the case, then great!

For example, sometimes an athlete just can’t produce enough tension to be adequately strong in any pattern, or he truly lacks upper body pulling muscle endurance.

If this is the case, start by asking the athlete what they have tried to improve in the past.  This allows you to sidestep falling prey to the same traps the athlete has already run into before.

Don’t run a Hatch Squat Cycle if he ran that last year and didn't make much improvement with it.

Or maybe he has never squatted heavy with any meaningful frequency before.

Then don’t overthink it and start with the basics!

Note: As an athlete moves above the 99th percentile of competitors in their sport, the limitations become more complicated.

What Should We Attack First?

I would be willing to bet that for any athlete you do a needs analysis for, you won’t be scratching your head trying to come up with training priorities.

Rather, you’ll have a laundry list of items and be wondering how you can cram everything into the athlete’s next training split.

We need to improve your Ring Muscle-Up technique, improve your Toes-to-Bar capacity, build your Strict HSPU strength, up all your Weightlifting numbers, and improve your time trials on the rower and AirBike.

My advice, pick the two or three of the most glaring holes & lowest hanging fruit and get to work.

Don’t get caught up in trying to do everything; you’ll fail to improve anything.

Move your way through these four steps:

(2) Fit Them into the Athlete’s Training Template

(3) Create a Clear Direction to Progress Each Priority

(1) Don’t’ Forget to Train Your Strengths

Chances are if you’re working with a serious athlete they have probably already put in a fair amount of work in the stuff they’re bad at.

This can be frustrating, unless the athlete has been around long enough that they have found a way to appreciate marginal improvements.

However, there are also times when an athlete may be better served improving 5% in an area in which they are fast adapting than 2-3% in an area that is a big weakness.

This decision making process depends on the training age of the athlete, the field that they are competing against, and the scoring system of their competition.

This is something I dived into at 23:10 of How Hypertrophy Impacts CrossFit Performance

It’s easy to get 3 weeks into a progression and suddenly realize you don’t know where you’re headed with it.  Or realized you’ve completely neglected it and moved on to something else.

Once again, this is another reason to “anchor” your programming with a template.

You need to be disciplined when writing your programming to stick with the priorities you’ve selected long enough to see measurable improvements.

Test & ReTest is good.  But testing and retesting -without getting distracted with other things between- is better.

I’ve seen some coaches or self-coached athletes get so tied up in “working weaknesses” that they forget to do the thing.

Even in the early stages of an athlete’s competitive year, they need to be doing touches of their sport.  It doesn’t (and probably shouldn’t) be a lot, but it needs to be somewhere.

For many of my athletes in limiter-based training, they get at least The Name Game and another MetCon throughout the week, even if they are focused on driving other numbers as the priority in their training.

Not having a coach puts you at a disadvantage.

The people you compete against have coaches and they help them finds ways to get an edge.  If you don’t have that resource, you’re making a choice to leave performance on the table.

That’s fine if you want to tinker & experiment on yourself.

But if you want to win, hire a coach.