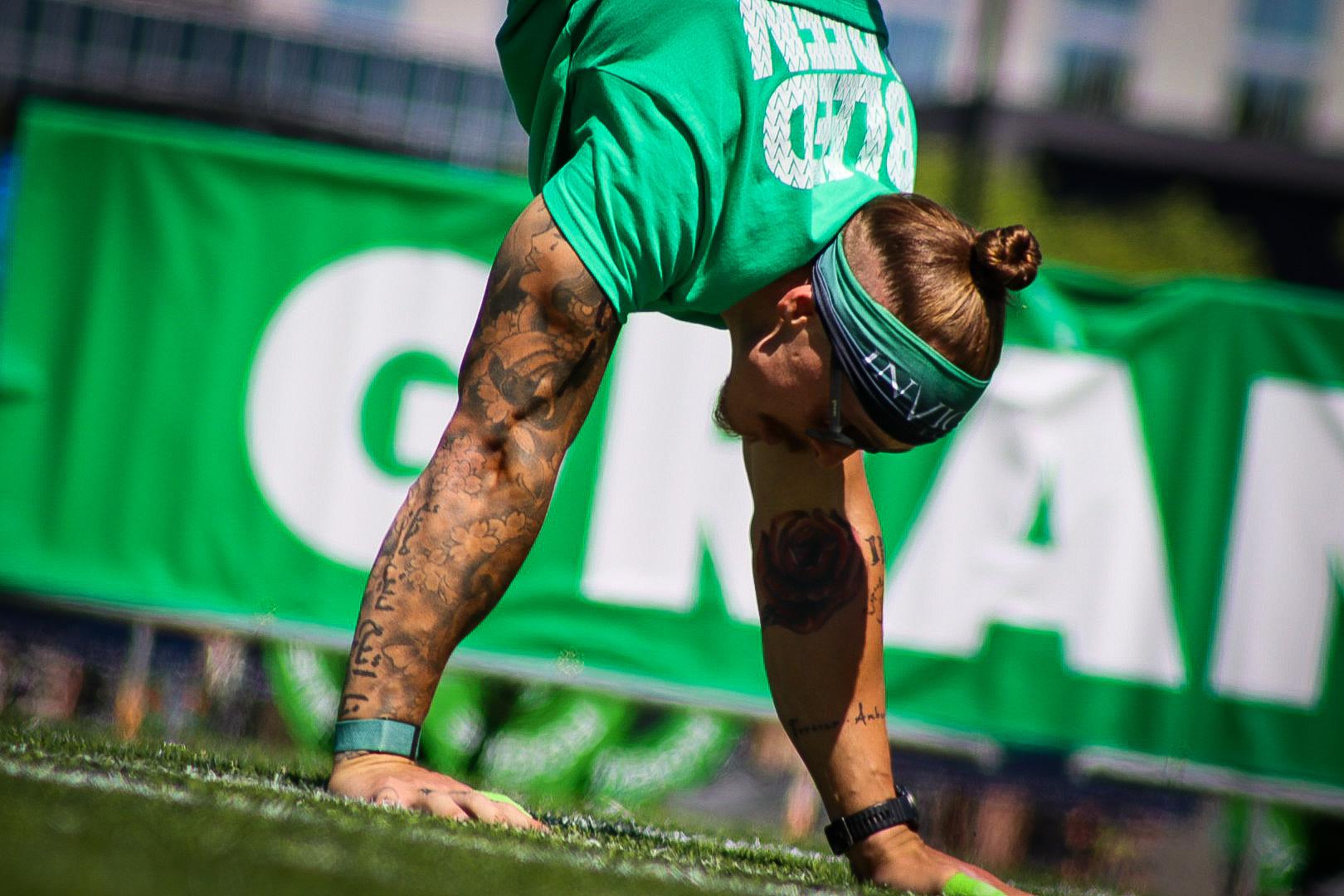 UK’s Fittest, Joshua Al-Chamaa, has made a name for himself in San Diego training on the 3rd Fittest Team on Earth, CrossFit Invictus. However, he wasn’t always invested in health and wellness. Once a contemporary dancer, Al-Chamma mentions that an awakening to his unhealthy lifestyle is what led him to try something new in going to his first CrossFit class in 2016. Since then, he's been steadily climbing up into the collective consciousness of the CrossFit community with his flair for showmanship and his palpable intensity on the field. We sat down with Al-Chamaa to discuss the future of his team's status, his love of his wife (and fried chicken) and whether he'll compete as an individual in the future.

Ammerman: Tell us about the beginning. What prompted you to go to your very first CrossFit class? Did you give up dancing in the process?

Al-Chamaa: At this point I had already given up dance and was working for an extremely high end fashion brand. I was working with some incredible people but was not completely fulfilled. While I made good money, I found I was surrounding myself in an environment which wasn’t exactly health provoking. My health was slipping. I was drinking and smoking often and I knew It had to stop. I woke up one morning and put down the cigarettes and never smoked again. I also stopped drinking for a while. However, I do like a good beer now. But the next step was to do something that would have me focusing on health. That’s when I found CrossFit in 2016. After taking my first class I was confused [because] everyone ripped their shirts off and ran around like wild animals. After my second class, I was one of those people and I felt liberated. These were my people. I knew one week into CrossFit the Games is what I would shoot for.

Ammerman: Coming off from being the Fittest in the UK, what led you to start training with CrossFit Invictus in San Diego?

Al-Chamaa: My first ever program I followed when living in England was Invictus back in 2017. I loved the programming but felt I had to be closer to a coach so I moved around. When I officially moved to California, Tino, who I was close with, invited me to the gym to check out their training environment and it was just what I needed.

Ammerman: We know that you have a strong athletic community at CrossFit Invictus but who would you say is your biggest motivator outside of the gym?

Al-Chamaa: My wife. She has been the best. I would have given up during the pandemic if she didn’t push me to go one more time. That’s when I became the fittest in the UK and found my love again for the sport. Doing the hard workouts for me is easy. It’s all the finer details that go in to being an athlete that will make you great and without Amber things may look differently for me right now.

Ammerman: A lot of professional athletes have superstitions or things that they must do before any sort of competition. Do you have any routines or rituals you go through before you step out onto the competition floor?

Al-Chamaa: My thing is just keep it the same. I am very chill for the most part and I keep that the same. As long as I get my bagel and cold brew coffee in the morning I am good to go. I’ve always tried to relieve myself of superstitions as it would cripple me to have one. My motto is “just go with the flow”.

Ammerman: The Invictus team brought home Third Place at this year's CrossFit Games. Do you plan to stick with the team division or go indy in the future?

Al-Chamaa: I personally love both for different reasons. I have no doubts I can kick with the indy’s. That said there is something to be said about team sports. You have to be completely selfless. Your feelings don’t really matter anymore when you have 3 other people showing up with you. We have something special in team Invictus. I know no matter what happens my team mates will show up for me as I will them. If we can keep this crew together, then I truly believe we have a good shot at bringing the affiliate cup back to the west coast but lets see what the next few months hold.

Ammerman: Of all the workouts that you did at the Games, which would you say was your favorite? Conversely, was there an event where you felt like you struggled?

Al-Chamaa: Oh, I loved all of them for different reasons. But I will have to say stepping out on the floor for the first time in the first event was pretty special. Not to mention I love cycling so that was fun for me. But there was many stand out moments and the programming played a big part in that. The toughest event for me was the final event. What I’ve not openly mentioned until now was that I was suffering with a health compromising condition during the games and that event was really the final straw as I was trying to keep it all together. But like I mentioned previously, when you have 3 others depending on you, you show up for them. Also, I know there are many athletes that go into the games with injuries, niggles or health conditions  when its time to fight. When you work your butt off for years, you have to put things to the side when you can and fight.

Ammerman: Do you feel like your background in contemporary dance has laid a foundation for you current athletic career?

Al-Chamaa: 100% my ability to pick up movements quickly and have good coordination is a product of my dance career. Also,  being able to utilize bigger muscle groups like my legs and shoulders is a huge benefit in CrossFit. That said I was never particularly fit when it came to maximum endurance. That I have worked very hard for.

Ammerman: We know nutrition is a big part of an athlete's life but what is your favorite go-to food when you're not strictly on your diet game?

Al-Chamaa: Contrary to what some believe, I am actually pretty flexible with my food. I always look to eat healthy but I’ve never counted macros. I just love good food and I try to get enough protein. My go to fun food will always be GREAT sushi or some sort of fried chicken. I LOVE CHICK-FIL-A.

Ammerman: From the newly produced Britt vs Josh series from CrossFit Invictus, who would you say is the most competitive between the two of you?

Al-Chamaa: I mean we had to create the series because it is pretty equal. We will be dropping many more episodes so we will let the viewers decide in the coming months. But go check it out! It’s really fun. Britt is like an annoying little sister. As I’m sure she says the same about me.

Ammerman: The 2022 NoBull CrossFit Games was your first Games appearance! How did it feel to cinch the ticket with your team?

Al-Chamaa: It was. And it felt great. I always knew we would do it because I believe in the work we are doing. We have great coaches in Holden and Hunter and we all show up and work hard. We just had to show the CrossFit community that too. Hopefully, should we take another run at team for 2023, there will be less doubts next  time.

Ammerman: And all inquiring CrossFit minds want to know, what is your favorite Crumbl cookie flavor?

Al-Chamaa: Any then with soft frosting and berries. Strawberry, Blueberry, Raspberry. Oh and I love the lemon ones too!!

Keep looking out for this UK transplant, California based wunderkind as Al-Chamaa's contagious, positive energy and consistent athleticism is steadily picking up more recognition from brands and fans alike. We can't wait to see what he tackles next.