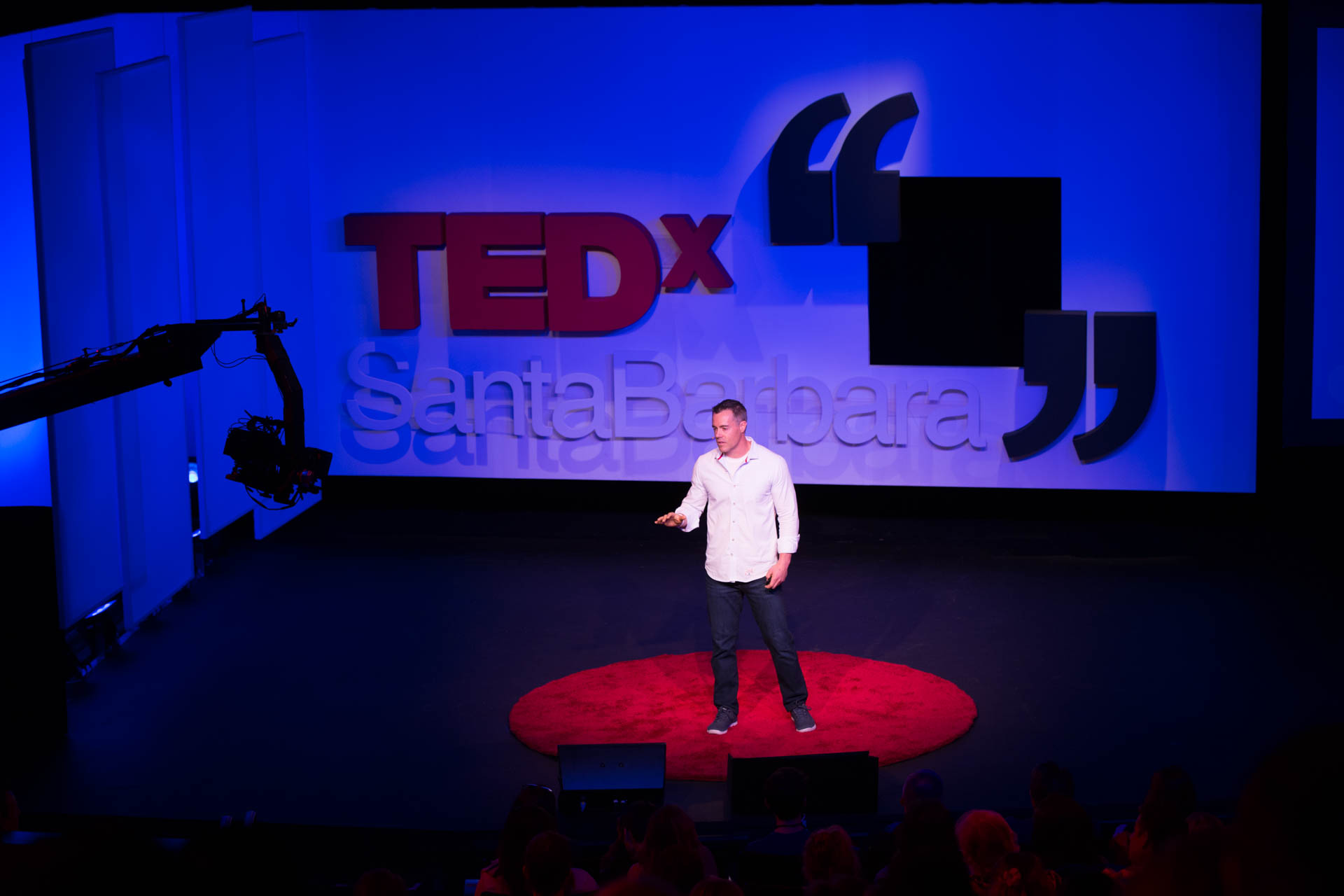 The entire auditorium is dark, except for the running lights on the floor. Music is blaring throughout, and there’s a spotlight on the stage, a circle in red marked in the center. There are four minutes left until the event begins.

The audience is littered with CompTrain shirts, wearing NOBULLS, Rogue fanny packs, and most of them are carry the physique of someone who has been doing CrossFit for a few years.

Ben Bergeron walks out, stopping mid-stage for photos as the emcee announces him, and walks out onto the red circle amidst an uproar of applause.

Except this isn’t a CrossFit event. This is Ben Bergeron’s first TED talk.

“It’s late August of 1994 just a few days before the start of my senior year of High School,” Bergeron begins. “At a pre-season football practice, my coach breaks out the team into two lines for our first tackling drill of the season.”

He continues, sharing a story of the first time he realized he was being attacked by his own mind, standing there in front of Joey, the biggest guy on the football team, forced to go head-to-head with him in practice. “I was completely unable to compete, because my mind had been hijacked,” he shared.

“Since that day, I have become completely obsessed with how our minds affect our performance,” Bergeron continued.

Ben Bergeron is no stranger to public speaking. Widely known as the coach of elite athletes like Katrin Davidsdottir, Cole Sager and Brooke Wells, Bergeron also hosts the Chasing Excellence podcast with Patrick Cummings and has a book of the same name.

Bergeron is a common name in the CrossFit industry, so it was no surprise that when the organizers of TEDxSantaBarbara reached out to him to be a speaker at their event last week, “The Stories We Tell.”

The theme for this year’s event was stories: Stories we tell ourselves, stories we tell others, and stories that are told to us. The 2019 event featured an array of speakers bringing their own stories that entertained while teaching and tackled challenging topics. Bergeron took to the stage with a Department of Defense Environmental Engineer, a producer for NBC, and an eleven-year-old boy hell bent on making teaching the most respected profession in America, and others.

His talk, “Your Mind is a Weapon,” reached 300 people in the New Vic Auditorium in Santa Barbara, CA last Saturday while another 250 watched via a livestream.

Bergeron adapted the speech specifically for users that might not be accustomed to the language of CrossFit, changing the “CrossFit Games” for “World Championship,” and “Regionals” for “Qualifying Events” stressing that weaponizing your mind can help people everywhere maximize the things in their life they want to be better at: jobs, relationships, health, hobbies.

By using CrossFit to address the needs of a broader audience, Bergeron was able to address what he sees as major misconceptions around what mental toughness actually is. “Instead of trying to rebuild that notion in people’s minds, he decided to call it something else. By reframing mental toughness completely, he hopes to help people understand it better so that they can use it to improve anything that’s important to them,” said Christine Bald, CompTrain’s Media Director.

The secret is to first set your sights, then to kill the critic in your head, Bergeron said. “In my work, there is one unavoidable truth: We compete. And that truth doesn’t end when we walk off the competition floor, it has always been a part of all of our lives. We compete for better jobs, we compete for better schools, heck, we compete to get a date with the hottie at the coffee shop,” Bergeron said.

“It was fun to share the ethos of what’s been at the ethos of my CrossFit coaching with a bigger population,” Bergeron told the Morning Chalk Up. “It’s been an amazing experience, the whole process is a lot more involved than what it looks like from the outside.”

Organizers of the event originally reached out to Bergeron almost a year ago about speaking. Turns out, a handful of Santa Barbara’s TEDx-ers are CrossFitters. Once Ben accepted, and the topic was agreed upon, Bergeron underwent roughly six months of coaching with both a content coach and a speaking coach, both provided by TED. “It’s a higher level of public speaking than he has done in the past, and he’s enjoyed the challenge of preparing for it,” said Bald.

“You realize the value of what coaching brings. The feedback is a weird double-edge sword. It can be hard to accept, but in the end you realize how valuable it really is, and it moves the needle for you,” said Bergeron. On finally walking out on that stage, Bergeron admits he was a little nervous, but no one in the audience seemed to notice. Especially not his wife, Heather, and daughter Maya, both sitting in the crowd, center stage, right where he could see them.