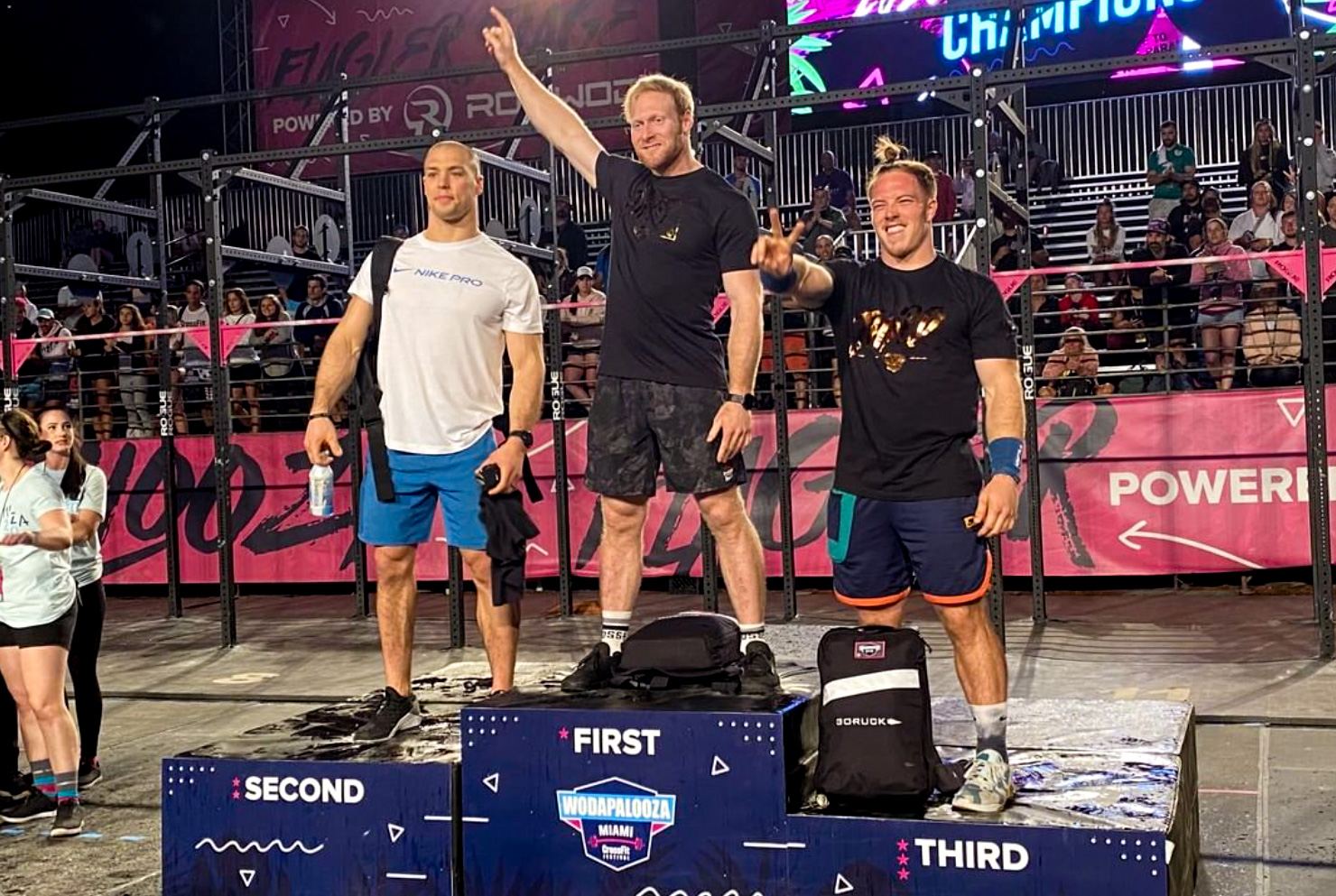 The Wodapalooza CrossFit Festival has billed itself as one of the premier and most exciting CrossFit competitions in the world. It lived up to that billing throughout four days of competition, culminating with a final, action-packed day. With podium spots, big money and the 2020 CrossFit Games invitation on the line, day four was punctuated by nail-biting finishes across all the Elite divisions at Bayfront Park in Miami, Florida.

For the first time since the Sanctional format was introduced, there was a tie atop the podium. With identical point totals of 714 points, Patrick Vellner defended his Wodapalooza championship by virtue of a tie-breaker over Cole Sager. The tie-breaker was the best event finish in the competition and Vellner tallied three event wins, while Sager had none.

Sager came into the final day with what appeared to be a comfortable 64-point lead over Vellner with two events remaining. The issue for Sager was that the eighth event was one that played right into Vellner’s wheelhouse. Named “Down-Up” it featured deadlifts at 335 pounds and bar-facing-burpees in a 12-9-6-9-12 rep scheme. Vellner, who recorded a deadlift of 595 pounds when he won the “CrossFit Total” at the 2018 CrossFit Games, dominated, recording his second event win of the competition after winning “Luce” to kick-off Wodapalooza on Thursday. He finished over 30 seconds faster than second-place finisher Noah Ohlsen, recording a final time of 4:14.

Meanwhile, Sager struggled with the heavy load, finishing 19th with a time of 5:50. His 19th place finish was his only finish outside the top-ten at the competition. Most importantly, his lead shrunk to just six points over Vellner, 620-614 heading into the finale under the Flagler Stage lights.

For Sager to earn his first career Sanctional victory, he would have to finish ahead of Vellner in the final event — “Celebrate Life” — a grueling chipper that consisted of 50 wall balls, 40 calorie ski, 30 dumbbell snatches, 20 box jump overs and 15 bar muscle ups. Sager and Vellner went rep-for-rep in the first two movements before Sager pulled ahead by three reps heading into the box jump overs. Vellner made up those reps on the box and both athletes got to the pull up bar at the same time. Vellner, a former gymnast, wasted no time getting up on the bar and had two muscle-ups done before Sager jumped up for his reps. The gymnast beat the former college football player Sager off the bar and celebrated as he crossed the finish line, with the raucous Miami crowd cheering the exciting finish and Vellner victory.

The women’s division had many compelling storylines as it headed into the final day of competition. Could Sara Sigmundsdottir unseat Tia-Clair Toomey as the top female athlete in CrossFit? And, who would earn the Games invitation in a close race that featured three women fighting for that honor?

After taking over the top of the leaderboard on Saturday, Toomey held a slight 16 point lead over Sigmundsdottir going into “Down-Up”. After going rep-for-rep with Sigmundsdottir, Kari Pearce and Brooke Wells through the first 12 reps of deadlifts and bar-facing burpees, Toomey methodically pulled away from the field. She picked up the win and flexed to the crowd gathered on Tina Hills after finishing with a time of 3:53. The win extended her lead over Sigmundsdottir to a comfortable margin heading into the final workout.

In the final event, Toomey ended her Wodapalooza just like she started it, with an event win. Sigmundsdottir placed second and Kari Pearce finished third as each secured their podium finishes.

The attention then went to Rolfe and Fotsch who were on opposite sides of the floor. Rolfe was ahead of Fotsch after the wall balls and ski, but Fotsch was quicker cycling through the dumbbell snatches and held a two-rep lead going into the box jump overs. Rolfe pulled even as they each headed to the pull up bar for their 15 bar muscle ups. A costly no-rep on one of her final reps cost Fotsch, as both athletes sprinted to the finish line. Rolfe would take home the Games invite by four-tenths of a second over Fotsch.

Two Sanctionals appearances this season and CrossFit Mayhem Freedom has two Sanctional victories. However, unlike their dominant performance at the 2019 Games, this season the team from Cookeville, Tennessee has been pressured. Team GOWOD went toe-to-toe with the four-time Games champions from the opening event to the final event.

Mayhem Freedom held just a two-point lead over GOWOD heading into Sunday. They would win event seven, team “Down-up”, 12 seconds ahead of GOWOD to give them an eight-point lead heading into the final event.

GOWOD needed to finish ahead of Mayhem Freedom and another team in “Celebrate Life” to pull off the upset. The team of Taylor Williamson, Andrea Nisler, Luke Schafer and Streat Hoerner took care of business on their side as they pulled ahead of Mayhem Freedom and the field on the partner dumbbell snatches and box jump overs to pick up their fourth event win of the competition.

The third-place team, Team Wit, was the team going rep-for-rep with Mayhem for the second-place event finish. It came down to the sprint to the timer button as both teams completed the muscle-ups simultaneously. Mayhem’s Tasia Percevecz out-touched Wit’s Harriet Roberts by .03 of a second to clinch Mayhem Freedom’s third-ever Sanctional victory, the most by any team, and redemption after their fifth-place finish in Miami last year.

** – Statistical support for this story provided by Chad Schroeder