If the older generations looked to magazines like Vogue and Cosmopolitan to see prevailing beauty standards, teens today have a guide to the model body, how to (unhealthily) achieve it, and their self-worth if they can’t, in their pockets all day, with no escape. Social media. It’s flooded with get-fit-quick schemes, detox teas, and photoshop, and it’s no secret that the perfected bodies teens see on Instagram are a major prompter for eating disorders and body image issues. And while teen CrossFitters probably aren’t obsessed with fashion models like their peers, the people they see as they scroll do create a high standard that can be just as destructive.

17-year-old Emma Spath knows the consequences of this new cultural touchpoint particularly well. Spath qualified for the 2018 CrossFit Games in the 14-15 division, years after setting her mind on getting to the Games when gymmate Brooke Ence earned a trip in 2015.

In the 2017 Age Group Online Qualifier, 14-year-old Spath placed 36 worldwide, just 16 spots out of the Games. So when the 2018 Open and AGOQ rolled around, she came out with a vengeance and ambition that seemed to surprise even her.

Spath recalled deleting social media, advising her friends not to talk to her, and avoiding the leaderboard in order to stay focused during the weekend of the Qualifier. And in the end, it paid off. Spath placed 18 in the AGOQ in 2018, punching her ticket to Madison. After scores had been finalized the Wednesday after the AGOQ, Spath got the good news surrounded by her favorite people.

As the school year finished up and Spath looked down the barrel of a summer full of training, she took on a new challenge to up her game — counting macronutrients. According to Spath, though, her motivations weren’t in the right place.

As her drive to be taken seriously as a Games athlete grew throughout the summer, Spath fell into a cycle of restricting and binging, resulting in a Binge Eating Disorder. For the month leading up to the Games, Spath moved to Idaho to live with her coach so she could focus on training with other competitors. As a result of the intensity of her training and restrictive eating, Spath recalls her body constantly telling her to “give me food!” which led her to repeatedly binge eat.

When the Games finally came around, Spath remembers being too stressed about the food she was eating, how her body looked, and what people thought of her to really take in the few days of glory she had worked for years to earn. And while Spath does remember the many happy moments from the Games, like meeting other like-minded teens that made her feel less isolated, a surprise visit from her grandparents, and the workouts, she says her anxiety about her body and food tainted the experience.

When Spath returned home from Madison though, she slowly started to recognize the toxicity of her relationship with food and began her journey of recovery. Which, over the past 20 months since the 2018 Games, has led her to become an outspoken advocate for self-love and body positivity in (and out of) the CrossFit space.

Unfortunately, Spath is joined by many other teen CrossFit athletes that are also struggling with different phases of eating disorders, body dysmorphia, and other body image issues. Spath said that because she doesn’t have the typical, “perfect” body type that you see on social media, she used her platform to prove that “fitness has nothing to do with fatness.”

Andersson recalls struggling with body image issues since she was as young as eight-years-old, and always having her current daily calorie count in her head since.

When she traveled from Sweden to Madison last summer, Andersson felt different than the other athletes, and wouldn’t take her shirt off, even after a tough workout. And while 16-year-old Andersson does appreciate that her goals as a Games athlete require a different body type than that of the Victoria’s Secret models, she does believe that some big-name Games athletes can create just as much toxicity.

In an interview with the Morning Chalk Up, Spath said she believes the toxic culture surrounding food in CrossFit is more a result of social media. But sometimes, when the two come together, it can be ever more calamitous. For example, when three-time Games athlete Sheila Barden posted an ab-pic on Instagram in 2019, people were furious.

To many teen athletes, Barden’s message of “eat less, go to bed hungry, burn more than you consume” was heartbreaking and wrong, Spath among them. Diet-culture opponents were quick to sound off in the comments, sharing messages of disappointment for Barden and encouragement for girls going through these struggles.

But, of course, there are other girls who have been saved by CrossFit. Among them are Delia Moises and Karis Jackson, two tough 14-15 competitors placing 20th and 70th respectively in the 2020 AGOQ. Like many of their peers, they’ve been competitive athletes in a variety of sports — volleyball, cross country, and track — and were driven by an urge to look skinnier. Both Moises and Jackson developed eating disorders, restricting their calories to extreme amounts, still never satisfied with their bodies.

Jackson was struggling just like Moises, and when she saw the 2017 CrossFit Games documentary, “The Redeemed and the Dominant,” she knew that was her way out. Jackson was eating as few as 600 calories a day, but when CrossFit came into her life, she slowly but surely grew with her body image and eating habits.

And so while CrossFit is most certainly healing some young athletes as they grow up and navigate a new world of social media and body comparisons, the issues that athletes like Emma Spath have faced are prevalent and concerning.

The Josh Bridges Post that Got Everyone Up in Arms 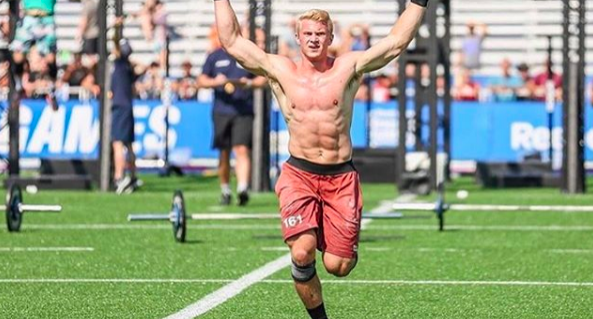