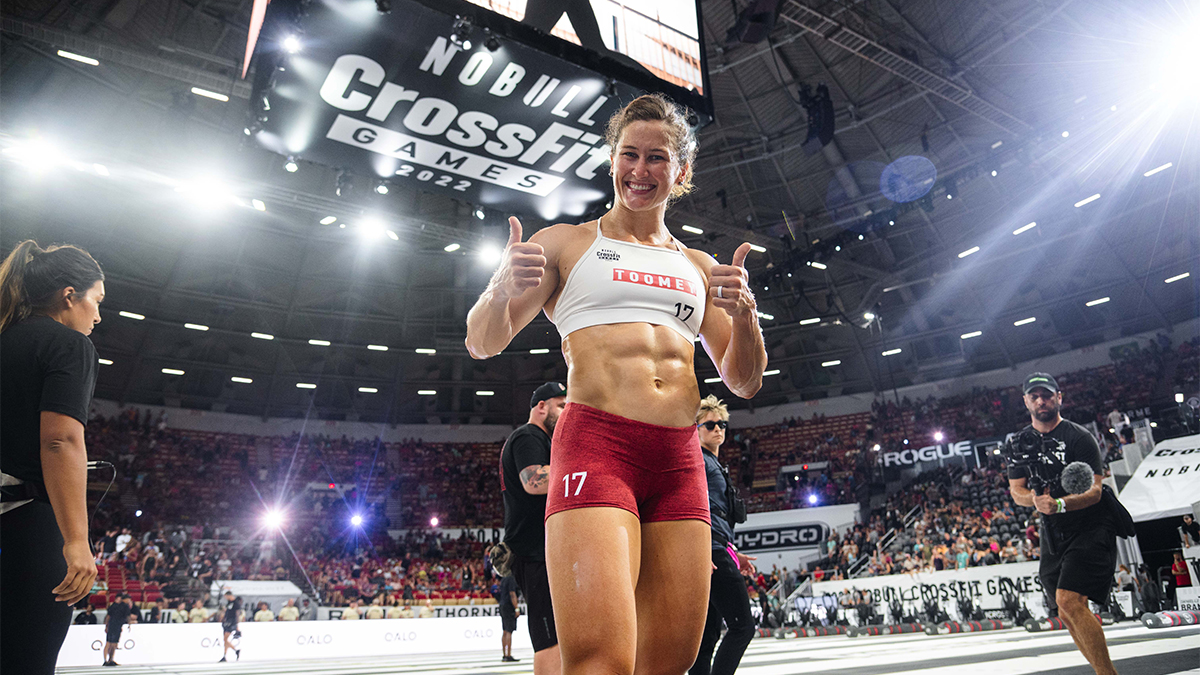 After her historic fifth CrossFit Games title last year, Tia-Clair Toomey was asked what was next for her.

“Next season, do it all over again,” she said, almost nonchalantly.

Today, Toomey lived up to her expectations of herself and has made history, again, by becoming the only individual, male or female, to win six CrossFit Games titles. She is your undisputed 2022 NOBULL CrossFit Games champion.

What does that mean for next season?

“That’s the question. We’ll see,” Toomey said with a smirk in a post-competition interview.

A Look at Toomey’s Week

Toomey started out the week a little shakier than normal with an uncharacteristic 23rd place finish on the Skill Speed Medley event (In fairness, she tripped up on the very simple unbroken single-under portion of the event, so it’s not as if her fitness was ever in question). Still, she found herself in uncharted waters—eighth overall after Day 1.

Toomey didn’t stay there long. On Thursday, she logged an event win and a second place finish to help her jump right back into podium position, although she still trailed Mal O’Brien and Emma Lawson at the top of the leaderboard.

Since Friday, though, there has been very little doubt that Toomey would end up back at the top of the podium. She took the lead after Friday’s first event—The Capitol—and didn’t look back.

By the end of Friday, Toomey had a 44-point lead over O’Brien, and by the end of Saturday she had extended to 94 points. And when all was said and done, Toomey finished her weekend with a 113-point margin of victory.

In her second year competing as an individual at the CrossFit Games, 18-year-old O’Brien also made history this weekend by becoming the youngest ever podium finisher.

Her finish is also the highest of any American since 2013 when Lindsey Venezuela was second overall behind Annie Thorisdottir.

Horvath went on to put forth a gutsy performance in the final event—Jackie Pro—good enough for fourth place, allowing her to clinch her third career podium finish by 44 points over Danielle Brandon.

Without taking away from Toomey’s performance this week, let alone her entire career, it must be noted that Toomey had to work a lot harder than normal against an incredibly young field of up-and-comers, including teenagers O’Brien and Emma Lawson, who challenged Toomey more than we have seen other competitors do in the last couple years.

Playing the comparison game, Toomey’s margin of victory last year was 256 points, compared to 113 this year. Further, in 2020 (granted it was the pandemic Games), she won by a whopping 360 points, and in 2019, her margin of victory was 195 points.

Similarly, when we consider event wins, Toomey had just two this year, compared to nine both last year and at the Finals in Aromas, CA in 2020.

With all that being said, the question is less about Toomey’s fitness level, but rather what it says about the fitness level of the rest of the field. And the scariest part is some of them are still teenagers.

Where the sport will be in another three years is anyone’s guess, and regardless of whether or not Toomey is still competing then, her legacy will not be forgotten.