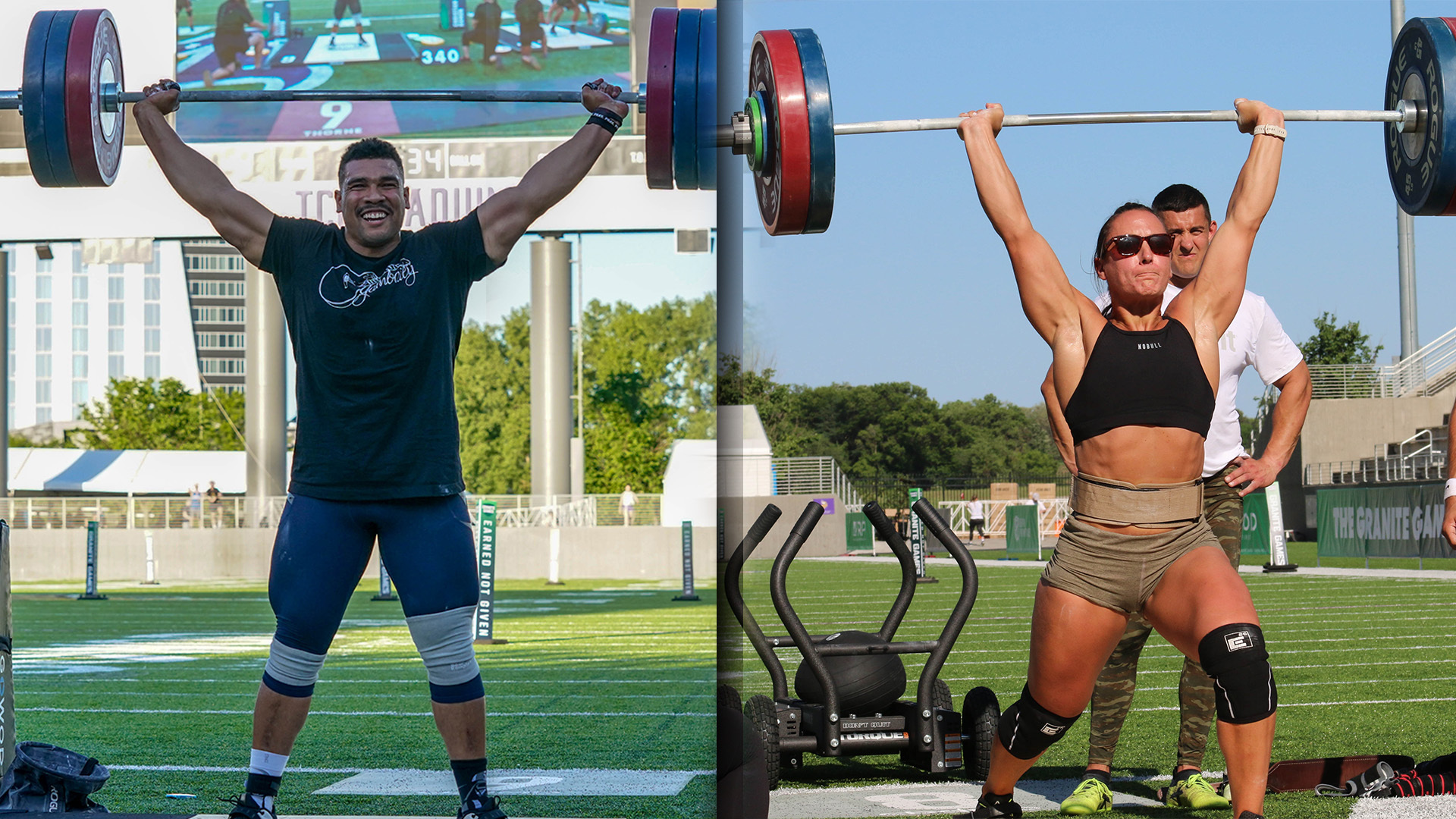 With the absence of community divisions, and scorching temperatures, the opening events for Granite Games took place Friday evening beginning in the late afternoon and extending into the night. Men and Women competed in two events, while teams also took the floor twice, but would accumulate four separately scored events for a total of 300 points.

First it was Ocean State’s Finest Christine Middleton with a 265 lb clean and jerk breaking the women’s record (previously held by Amanda Barnahrt at 257 lbs) as part of team event one. This was part of an overall consistent performance on day one for their entire team who find themselves in second place.

Next up were the individuals for the one rep max snatch. All eyes were on Anthony Davis in the first heat of men’s competition. Having hit 330 just last month, many were speculating that Tola Morakinyo’s record of 337 lbs was in jeopardy. Davis needed two attempts at 295, and then two attempts at 315, but he eventually hit them both. When he loaded 340 on the bar you could sense the antitnicaption in the air. In what was his best snatch of the event, he calmly received it and stood it up knowing full well he had just broken the record.

Event 1: If you got dejavu from last weekend, you wouldn’t be mistaken. The first team event at the Granite Games featured a 1-rep max snatch and a 1-rep max clean and jerk for teams in the same format as the Midatlantic CrossFit Challenge. But the twist came about one minute after the end of the event, when teams dove straight into six minutes of sled pushing and sprints. Middleton’s record wasn’t the only impressive lift of the night for team athletes. Marco Coppola, who has a listed clean and jerk PR of 419 lbs ended up hitting 365 which pushed their men over the top to an event win.

Event 2: As soon as the lifting was over teams took part in Push Race which featured the Torque Tank. The relay style event provided an opportunity for strategy as the order of work was left entirely up to each team’s discretion. This made for a tight race between several teams, while first place team, 8th Day Gym, would won by a margin of just six seconds, only .67 seconds separating the second and third place teams.

Event 3: After destroying their legs on the field, athletes got a chance to work their shoulders with close to fifteen minutes of devils press and handstand walks. Similar to the previous event of the day, this event also relied largely on individual performance. Movefastliftheavy Crew had a strong start to the event. However, around the 10 minute mark Omnia took the lead and did not look back.

Veteran Allesandra Pichelli might not have stood out in any particular way, but a tie for second in event one and an brilliant strategy in event two place her at the top of the leaderboard at the end of day one.

Teenagers Mallory O’Brien and Emma Cary answer all the questions on day one. A dominating performance by O’Brien in event two, and a cool 200 lb snatch by Cary landed them 3rd and 5th respectively on the leaderboard.

It’s incredibly tight all the way down to 12th on the women’s side. A total of 27 points separate 3rd from 12th. Tomorrow is going to be critical.

Four men have pulled away from the field after day one, and three other are locked in a battle for the final Games spot. But with many more moving parts in several of the upcoming workouts expect that to change over the course of the weekend.

Davis backed up his event one win with a fifth place in event two and leads after day one.

A fifth and a third find Saxon Panchik right behind him in second.

Much like Pichelli, veteran Tim Paulson calmly sits in third. His come from behind performance on Thruster Run 3.0 (event two) mirrored her execution of the workout and earned him second place in that event.

Chandler Smith is in fourth and rounds out the top group of men after day one.

Several Games hopefuls are hovering inside the top ten, all of whom will be looking to back up solid day one performances with more of the same tomorrow.

Big Picture: The workouts on day one were the most predictable of the weekend. Opportunity is abundant on day two, some will capitalize and make big moves, others will fall into victim to some cleverly programmed events, and there’s only one way to find out. Tune in tomorrow for moving day and watch those answers unfold.

How to watch day two of the Granite Games:

All the details on where to watch can be found here.