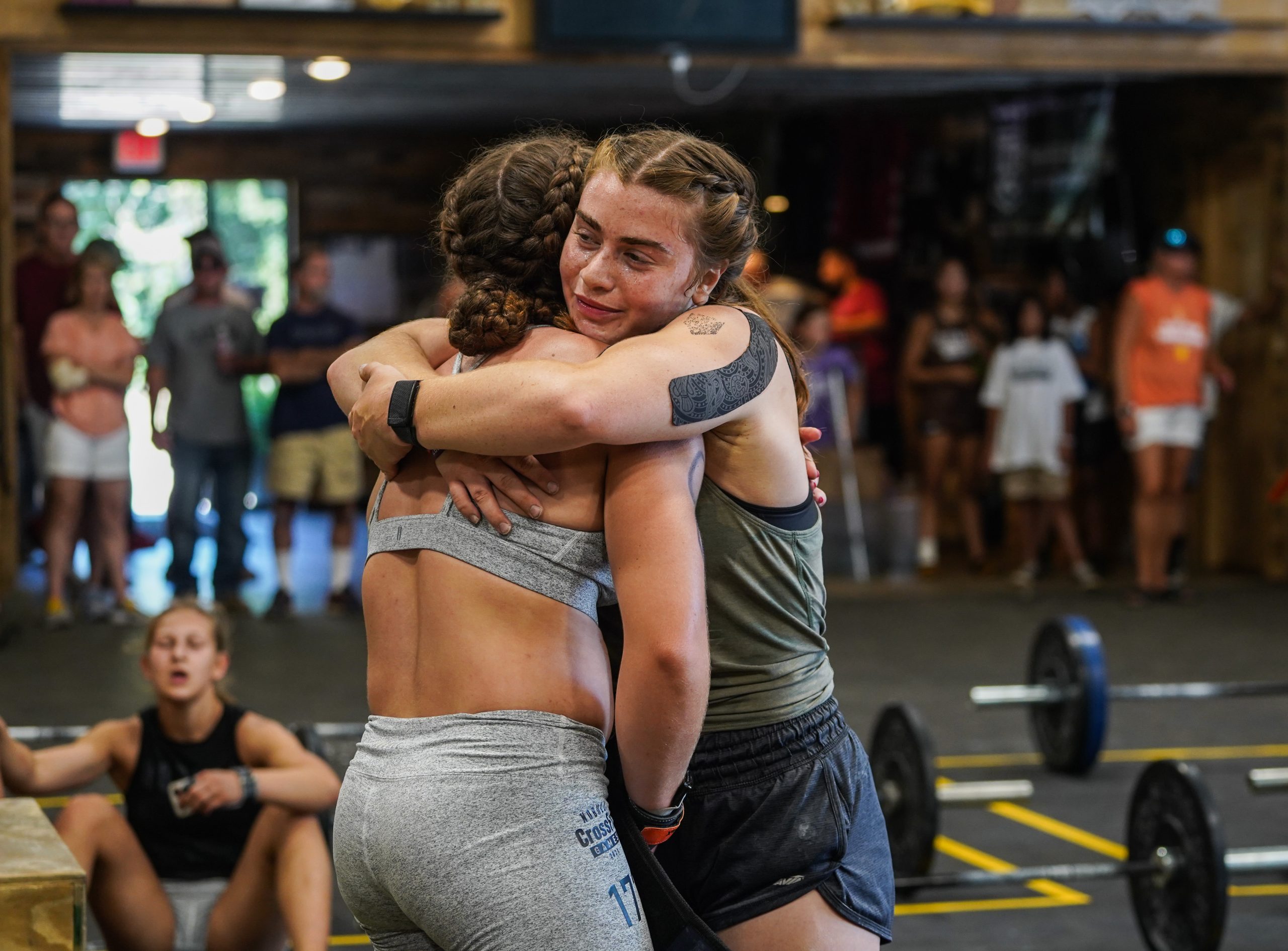 Modeled after the Games spirit award, the Victory Grips Spirit Award was voted on by athletes and given to one person per division that exhibited leadership, support, and grit. Among the winners were three Triple Rivers CrossFit athletes, Eliana Price, Blake Vanderbrink, and Andrea Bell in the rookie division, and Davis Merrill in the 18-19 girls division.

Also a spirit award winner was Miguel Buzza Roo, 2021 CrossFit Games athlete, who left Brazil a month before the Games and has been lodging in Three Rivers with his mom since leaving Madison. Buzza Roo says he’s excited to stay for the winter and see the Michigan snow, and in his award introduction, Throwdown coordinator Stephanie Price mentioned Buzza Roo’s big, permanent smile and warm attitude towards competitors, friends, and volunteers.

A new addition to the Throwdown, Rookie Day provided first competition experiences for over 50 teen athletes, including a first bar muscle up for Eliana Price. As the daughter of competition coordinator Stephanie Price and sister to athlete liaison and emcee Azariah Price, Ellie had the entire gym backing her up as she attempted her first rep, cruising right through it and getting five more before the time cap expired. When she jumped back down, Price was met with teary-eyed hugs from friends and her older brother, who said the moment is one he’ll remember for the rest of his life.

Rookie athletes took on Strongman Metcon, an event from last year’s elite competition, as their third event of the day. Athletes started with a sled pull, into a 200 meter farmer carry around the venue and to the lake, where they completed a 300 meter paddleboard before heading back out and going through the workout again in backwards order. 15-year-old Taylor Madge took second in the event and her division, right behind standout Liz Chaney, who won every single event. Madge, adorned with glitter paint on her face, showed huge improvements from her 111th place finish in the 2021 Open.

Nate Ackermann proved his Games championship wasn’t a fluke with two event wins and another trademark consistent performance with no event finish outside the top two. After the Games, Ackermann joined Jacob Heppner’s Functional Eating program, already making one of the big changes he set out to make after the 2021 season with his diet. Just one of Ackermann’s standout performances was in Event 2, where he snatched 250 pounds and clean and jerked 295, a 45 pound jump from his max clean and jerk of 255 in the 2021 Open. Ackermann will age out of the teen division in the 2022 CrossFit Games season, but shows no signs of slowing down under CrossFit Mayhem programming.

2021 MACC 23rd place finisher Maggie Parian took the 18-19 girls division by storm with three event wins in strength-focused workouts and never a finish outside the top 5. She was the only athlete with individual division experience higher than quarterfinals to compete.

17-year-old Landen Ryan made sizable improvements over the off season, being the only one to really push Ackermann in the 16-17 division after not qualifying for the Games in 2021. Ryan placed first in two events, Rolling Thunder and Ambush, two running heavy events, and only had one finish outside the top seven, a far cry from his 29th place finish in the Open this year and 50th place in the AGOQ.

14-year-old Kaden Hogan took the youngest elite boys division by storm, starting off with the fastest Event 1 time of the entire day at 31:04 for the grueling down-and-back style workout, almost two minutes ahead of the second place overall finisher. He went on to earn two more event wins in the swim event and Convoy, the last workout with 200 meter runs nestled in a 21-15-9 quadruplet with handstand pushups, pullups, thrusters, and deadlifts. Standing at just 60 inches tall, Hogan was the smallest athlete in the field, but certainly had a strong motor and played the damage control game well on events that didn’t play to his favor.

A growing tradition, the Pit hosted the second annual Morris memorial workout in honor of Jacob Morris, a 2019 CrossFit Games teen athlete who passed away due to a congenital heart condition four months after the competition. James Sprague and Dallin Pepper, two athletes that competed alongside Morris, took part in an elite demo heat before Pit athletes took on the workout. Morris’ parents spoke before the event and explained that the workout, a handstand walk, Echo Bike, and sandbag sprint, was chosen in their son’s memory because it showed his heart and love for the sport and competitors.

15-year-old Hailey Rolfe blew the 14-15 elite competition out of the water all weekend long, winning 75% of her events. In the second event, Heavy Artillery, in which athletes had three 30-second windows to max out their snatch, followed by a max clean and jerk in the same format, Rolfe lifted a total of 375 pounds, which would’ve been good for second place in both the 16-17 and 18-19 girls divisions. In addition to her first CrossFit Games appearance last month, Rolfe competed at the Pit Teen Throwdown in 2020 where she tied for 12th, showing impressive improvements in just a year.

Athletes started off day two of competition with a ring muscle up, rowing, and swimming triplet that added some adversity to an otherwise streamlined event. With different strap configurations on the rings in addition to the slippery texture in the second and third rounds once athletes had already been in the water, many athletes struggled to rep out 15 muscle ups where the volume would normally be no issue for athletes of this caliber, even at a young age. Delia Moises, who competed at the 2021 CrossFit Games in the 14-15 division, trains almost entirely in her garage gym, since she can’t drive, where she has to consciously duck her head for muscle up work. Moises was in her second round of muscle ups when the time cap expired, though no athlete in her division finished.

Just 14-years-old, Games athlete RJ Mestre is already making veteran moves. For the swim event, Mestre was the only athlete to use shoes for the rowing portion, let alone slip-on Crocs. Silly as it may seem, Mestre went on to place second both in the event and overall, and was one of only two athletes in the 14-15 boys division to finish the event. With one year still left in the 14-15 division, Mestre will be the heir apparent for the top of the Games podium next summer, and clearly has some wise competitor tricks up his sleeve.

Event two’s max snatch and clean and jerk led to some exciting PRs for athletes across the board, including 16-17 division competitor Aidan Bailey. Bailey competes in USA Weightlifting competitions, and came in second in the 2021 Youth Nationals 73 kg division, but still showed up with a new snatch PR for the Throwdown.