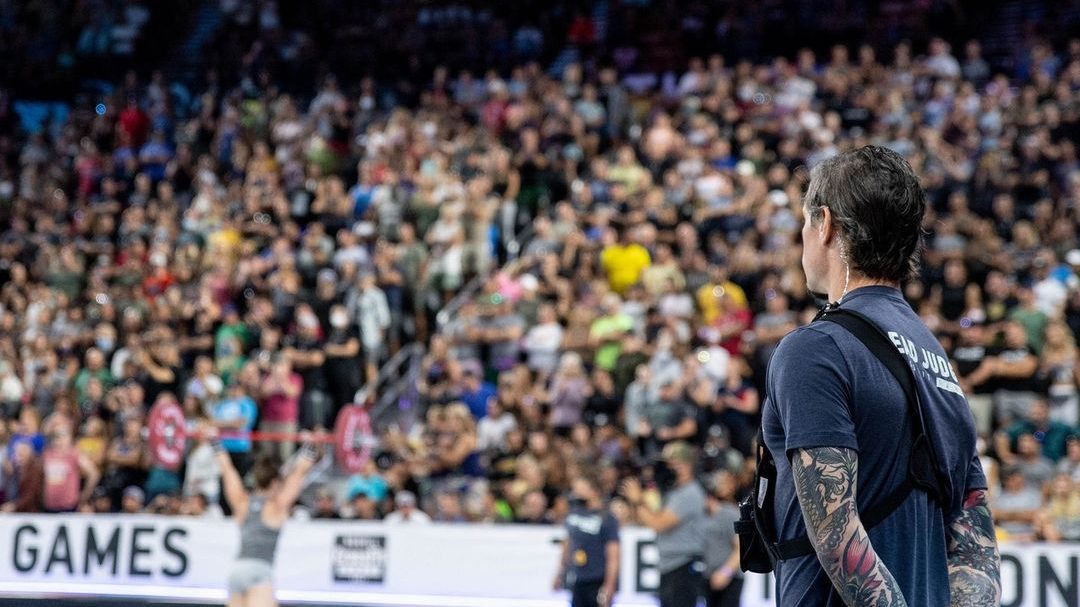 Last week while media were zeroed in on the Post Quarterfinals press conference, CrossFit also released an hour-plus-long Post-Quarterfinals Podcast episode with Chase Ingraham interviewing Adrian Bozman on everything from shuttle run regrets to being the new figurehead of the CrossFit Games.

The May 5 episode addresses many of the CrossFit community’s concerns around this year’s online stages of competition: score invalidation, submission deadlines, movement standards, communication and transparency.

1. Shuttle runs have been in the works for a long time, and they’re probably here to stay.

Though Bozman is the new figurehead of the CrossFit Games, he has been intricately involved in the programming and planning for a long time. The shuttle runs were an element being discussed even last year, he says, but the timing wasn’t right for previous Games director, Dave Castro.

“Dave and I, we talked about the shuttle run for a while. Last season…shuttle runs were something that I wanted to do and Dave’s like ‘no, let’s wait, because I want to do this in the Open next year.’”

Ultimately, the decision to move shuttle runs from the Open to Quarterfinals was made over concern of global affiliates having the proper space to execute it with all members, Bozman explained. However, it sounds like shuttle runs are here to stay.

This season, the conversation surrounding CrossFit’s online competition scoring submission policies was headlined by Games hopeful and 2021 Semifinal athlete, Anikha Greer. However, Bozman was clear that “it’s not Anikha’s thing,” and that athletes ask for exceptions every year.

3. The responsibility for integrity in the sport spans beyond CrossFit staff.

Bozman stated one of the biggest challenges his team faces in online competition is the lag time between a video being posted publicly, and the review and validation of the athlete’s score.

Though he does believe a certain amount of movement scrutiny is good for athletes and keeps them honest when completing workouts and submitting their scores, the Competition Director is not a fan of athletes being criticized with a level of harshness where they don’t even want to participate in the future.

And when it comes to his team being the sole upholder of standards and integrity in the sport, Bozman takes a firm stance:

4. CrossFit keeps a running list of improvements for future years.

Throughout the 65 minute conversation, Bozman acknowledged the legitimacy of critiques in the current system. Some of these issues, he said, are unavoidable when dealing with the logistics of an online competition as large as the CrossFit Quarterfinals.

One thing is for sure, Bozman makes it clear he’s not the type to make a reactionary amendment when opinions get loud on social media. Even though solutions may seem simple to critics, he says they are often missing the big picture of how the entire field will be affected by a proposed change.

Rather, his approach appears to be playing the long game, “I don’t like jumping into those (policy) decisions reactively, I think that’s the wrong way to go about it…I’m a big believer in incremental progress. It has to be that way in my opinion.”

And Bozman jokingly added, “program workouts that are exclusively bar-facing burpees and pistols. At the end of each shuttle run.”

5. The bottom line: For every error that needs correcting, there is still a lot going right.

In the midst of harsh judgements at the hands of YouTube and Instagram commenters, Ingraham reminded listeners that CrossFit is in its 16th year as a sport—“a newborn baby” compared to others that have been established for over 100 years—and in many ways, the sport of CrossFit is a marvel of global growth and expansion.

Bozman follows by urging the community to have a longer-term memory bank than the 2022 season: “The last couple years have been turbulent, there’s no way around that…There’s a lot of people out there that are very much looking for anything that appears to be a crack in the system, but many of these things have been consistent for years.”

Where he wishes things were different is not in the presence of negativity, but when that negativity overshadows all of the stories of triumph representing what CrossFit is truly about.

“What gets overlooked is the thousands of people out there that have a great experience. I hate that anytime you bring up something like that it sounds like you’re deflecting or don’t want to take responsibility. … But it shouldn’t cancel out so many of the positive experiences, and the cool stuff happening within the community.” He adds, “This is a really big, healthy, growing thing. Just because there are some bumps along the road, it doesn’t mean it’s all bad.”

Regarding the upcoming Semifinals, Bozman is looking forward to it: “in-person competition is where it’s at.”

He confirms that each event’s programming and workouts were reviewed, analyzed, amended, and then approved by his team.

The tip he leaves for fans: Watch the cutlines. “For Semifinals, the story is on the bubble.”

Go Deeper with Conversations from the Morning Chalk Up YouTube Channel:

May 8, 2022 by Morning Chalk Up
More About Anikha Greer