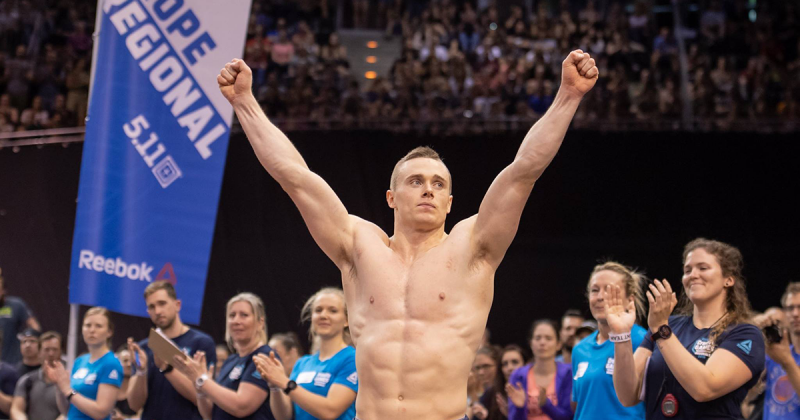 Welcome​​ to The​​ Morning Chalk Up’s​​ Reykjavik CrossFit Championship (RCC) power​ rankings.​ In order to establish these power rankings, we analyzed major CrossFit competitions since 2017 based on an athlete’s placement and level of competition, factoring in how long ago the competition occurred. Here are the top ten athletes ranked going into the 9th Sanctional of the 2019 CrossFit Games season.

Methodology is explained at the bottom.

Training out of CrossFit Alioth in Dubai, Streat’s 6th place finish in the Dubai CrossFit Championship was just one spot away from a Games ticket. Streat was then able to secure a Games ticket by finishing 14th in the Open. This adds to an impressive resume that includes the winning of Wodapalooza in 2018 and a 14th at the 2017 Games.

After winning the Europe Regional last year, he was unable to compete at the Games due to visa issues, stating“Let the preparations for the 2019 season begin!” That preparation clearly paid off as Roman has a 2019 Games ticket from his 5th place finish in Dubai. This will be Roman’s third Sanctional this year, following a win at the Italian Showdown just last weekend.

After three consecutive years of competing at the CrossFit Games, Lukas is coming into Reykjavik off a 4th place finish at the Italian showdown, a finish that is likely to earn him a fourth consecutive trip to the Games. While a 17th place at the 2018 Games is respectable, it should never be forgotten that it was Lukas who won the Marathon Row event at the Games.

Current projections have Tim Paulson’s 31st place Open finish just one spot outside of the Games ticket cutoff line. There is still a chance Tim could get his Games ticket through the Open, but Reykjavik is his chance to control his own destiny. A Games ticket from Reykjavik is even more likely with all four of the athletes ranked above him already in possession of an invite.

Connor is an athlete on the verge of going next level. With solid performances at Regionals the last three years, Connor had a very impressive performance in Dubai this year taking 8th place. Seven of the other top 9 finishers are currently in line to get a Games invite. Connor was one of the athletes kept out of a top Open spot this year by workout 19.1, similar to Noah Ohlsen, where he picked 522 of his 721 total points.

A two-time Games athlete, Alec is well known for his gymnastics and already has a Games invite this year as a member of the team ROMWOD/WIT. At Wodapalooza this team bested a highly competitive field which included Rich Froning’s Mayhem team, Invictus X, Team Misfit and more. The brother of Games champion Ben Smith and regional competitor Dane Smith, Alec is the family’s frontrunner for CrossFit Games success this year.

In the 2014 Central East region Will was the rookie on the heels of Rich Froning and Scott Panchik, betting out Graham Holmberg to get a ticket to the Games. The next two years Will narrowly missed going to the Games and was then taken out by injuries in 2017. After starting his comeback in 2018 this year, Will looks up to the challenge of making it back to Games with an impressive Open performance and a 3rd place finish at Mid-Atlantic CrossFit Challenge.

Similar to Will Moorad, Paul’s last appearance at the Games was in 2014. A Canadian hockey lover with a listed 515 pound back squat and 300 pound snatch, it’s not surprising that Paul excels at strength and power events. A proven competitor and athlete, if this competition starts to favor the stronger athletes by the inclusion of strongman style events it could go very well for Paul.

With five total Games appearances, four Individual and one Team, starting way back in 2011, Ben is arguably the most experienced athlete competing this weekend. While Ben has not been to the Games since 2016 his last two Open performances (29 in 2018 and 101 in 2017) revealed his athletic capacity is still at the highest level.

A four-time individual Games veteran, Helgadottir already has a 2019 Games ticket from her 4th place finish at Strength in Depth where she surged past Jessica Griffith in the last event to capture it. Regardless of what is secured, Thuri is surely competing to keep the Reykjavik title in the hands of a Dottir.

This 18-year-old former teen champion already has two years of experience competing in Regionals. Now training out of Cookeville, TN with the Mayhem crew there is little reason not to believe this young star is a big piece of the future for CrossFit. She already has a 2019 Games ticket from her Open performance, showing she can hang with the best in Sanctional competition with a 7th place finish at Strength In Depth.

Knocking on the door to the Games the past two years at Regionals, Jacqueline made it to the Games this year with a strong and consistent Open performance. Her consistent performances across multiple competitions since 2017 have this Norwegian ranked 3rd coming into the event and with a good chance of finally moving onto the podium.

This five-time regional veteran is set to receive her first Games invites as the Fittest in Finland (pending final review). Emilia has improved her Open rank every year since her first Open in 2013, making it onto the first page of the leaderboard this year.

Emelye is the only woman in the power ranking top seven without a Games ticket, opening up the possibility that any top finish will net her a 2019 Games invite. While not a Sanctioned event and therefore not in the power rankings, Emelye is coming off a win at the European Championships, standing atop the podium with Bronislaw Olenkowicz, who won Strength in Depth

This year Carole captured the Fittest in France title and therefore already has a ticket to the CrossFit Games (pending final review). But, this weekend will be about her gaining valuable live competition experience before her first appearance at the CrossFit Games this August.

After major penalties in the Open, Anna dropped from 21st to 714th, but was able to barely hold onto her title of Fittest in Greece and her ticket to the CrossFit Games. Reykjavik will be a chance for Anna to prove to everyone that she is an elite athlete capable of competing with the best in the world.

Lea narrowly lost the title of Fittest in Mexico title to Brenda Castro (pending final review) and is now outside the CrossFit Games looking in. Reykjavik is her second chance to earn a ticket to the Games.

With so many athletes in the field already holding a ticket to the CrossFit Games, it’s not about winning but about beating the right athletes. Elena showed through this year’s Open, placing 118 worldwide and second in Spain, that she has the ability to hang with the best.

Alison is in the same situation as Elena, where Reykjavik CrossFit Championship is about getting into the top five and having a shot at a CrossFit Games invite. Alison took 9th worldwide in 19.1, completing 346 reps and showing she has the ability to crush brutal workouts.

Where an athlete placed in a given event determined how many of the total available points they earned. To make sure these power rankings did not overly value frequency of participation, but rather measured fitness capacity and top-end consistency, only the top 3 performances from each athlete were considered. The maximum number of points an athlete could have achieved is therefore 2,800, which Mat Fraser did with a 1st at the 2018 Games (1,000 points), a 1st in the 2019 Open (1,000 points) and a 1st at Dubai (800 points). For comparison BKG is the top ranked male athlete at Reykjavik with an impressive 2,666 points from a 5th at the 2018 Games, a 2nd in the 2019 Open and a 2nd at Dubai.

Two additional male athletes outside of the top 10 worth keeping an eye on are:

The surging Lefteris Theofanidis, who already has his ticket to the Games with a 4th place finish in the 2019 Open and the title Fittest In Greece. However there is little else on his competition resume, which is what keeps him outside of the top 10 in these power rankings

2018 Games veteran John Coltey, who was 28th at the Games and 2nd in last year’s Atlantic Regional. However, this year has been less than expected for John with a 221st finish in the Open and a 32nd place finish at Wodapalooza.