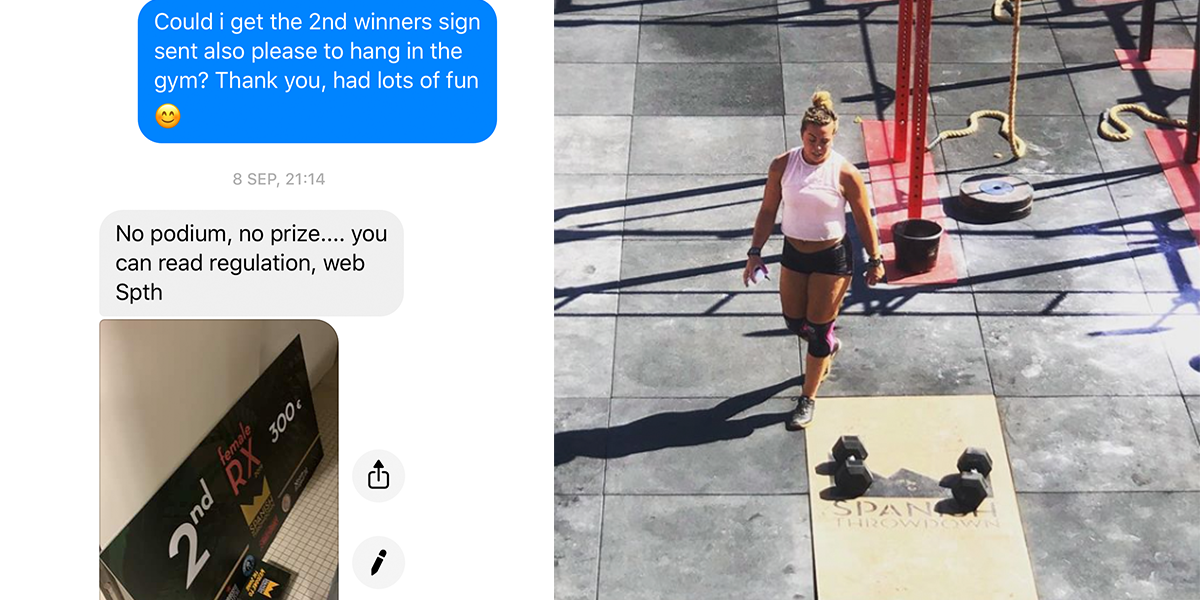 Two weekends ago, at the three-day Spanish Throwdown in Madrid, Spain, Cliona NíCheallacháin NicChárthaigh finished second in the RX division, a placement which would have awarded her €300 in cash, the trophy/medal, plaque and some other small bits. Due to the event running nearly two hours late and a 5:15 PM plane to catch back to Dublin, Ireland, Cliona had to leave. Before departing, she spoke to the head judge, explained the situation and asked that her prize be sent to her. He took down her information and agreed, according to Cliona.

When Cliona reached out on Facebook Messenger regarding her prize, she received this response:

Adding fuel to the fire, Alberto Hornero, who is a volunteer with Spanish Throwdown, responded on her Instagram post: “The easiest thing in life is to complain. The hardest thing is to read. I invite you to read the rulebook on the website. Everything is clearly explained.”

When Cliona pointed out the hour-long time delay which caused her to miss the ceremony, Spanish Throwdown sent back a photo of the scheduled, underlining “APPROXIMATE SCHEDULE” in red.

Update 3:55 PM PT — Morning Chalk Up has joined Noah Ohlsen in setting up a gofundme page for the community to support Cliona.

Update 4:19 PM PT — FITAID announced they are donating the prize money to Cliona.