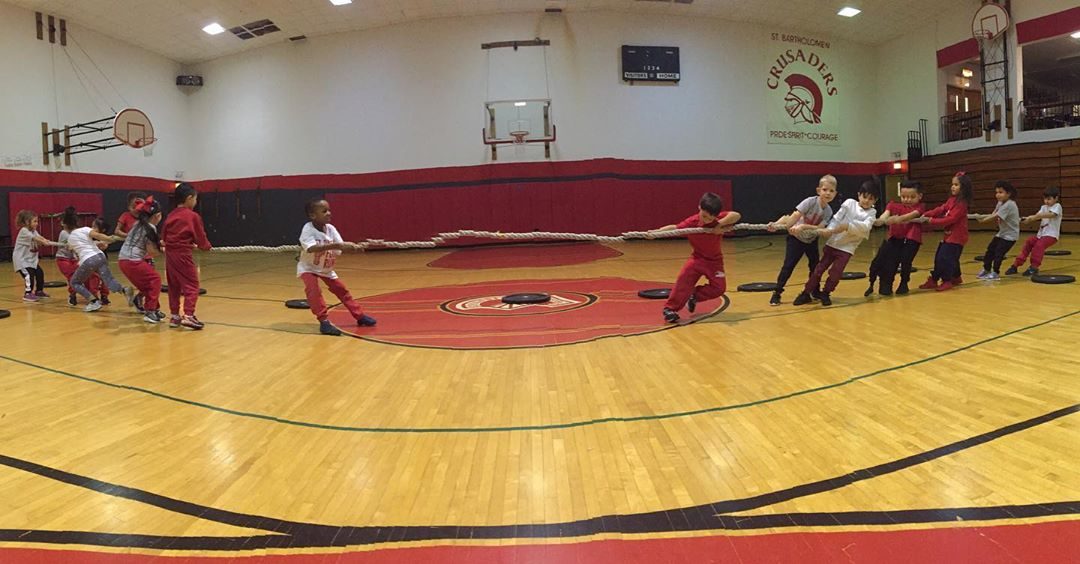 Allyn Doyle is a regular face at CrossFit Defined in Chicago, IL. A natural athlete, she played cross country, basketball and softball in high school before becoming a Varsity Cross Country team member and captain at Saint Anselm College. So when she became Vice Principal of St. Sylvester School she knew one of the first changes she wanted to make was in physical fitness.

She removed traditional P.E and instead offered CrossFit to the entire school population, all 260 students.

“Although I loved traditional gym class with all the sports we got to learn, I knew there were others who despised it. Traditional sports weren’t their thing and traditional PE didn’t give them an opportunity to explore another avenue for health and wellness. With childhood obesity on the rise, I felt it was important to reach more students; to show them that fitness can be more than what we typically think of as ‘sports.’  I want the kids at my school to see fitness as a natural extension of the learning they are already doing,” Doyle told Morning Chalk Up.

And she brought in help, Coach Danny Wright from CrossFit Defined. Not only was Danny a coach at Doyle’s box, he was also her boyfriend and was working in the Charter school system. It was an easy transition from the beginning. “Danny was helping the students here understand that fitness was more than traditional sports. It was movement, it was playing, it was doing handstands and making good nutritional choices at school and at home,” said Doyle.

They didn’t have any real CrossFit equipment at St. Sylvester when the program started. Coach Wright was using plastic hockey sticks instead of PVC pipes and wooden blocks instead of dumbbells. They used dodge balls instead of wall balls and owned a tangled mess of jump ropes. But in September of 2018 they were able to raise some funds through RPM Training’s 10K Jump Challenge and through a fundraiser with CrossFit Defined in the Spring of this year.

The students, and their families, loved it so much that they decided to expand to nearby St. Bartholomew School. Danny, seeing the success at St. Sylvester, jumped at the chance. Wright told Morning Chalk Up, “In just three years, CrossFit at the schools has shown student improvements in gymnastic skills like the push-up and air squat, as well as the weightlifting skills like the deadlift or shoulder press. Overall, CrossFit is well on its way toward creating more productive, healthy, lifelong movers and servants of God in our future communities.”

Danny transferred to start the program there, and called up another coach at CrossFit Defined, Kevin Agbulos, to see if he was interested.

He was, and for the second time in a Chicago Catholic school, P.E. was tossed and replaced with CrossFit. The program there is up and running and the kids, as well as Agbulos, are loving it.

Coach Agbulos said, “With CrossFit, I’m able to teach and show kids that physical education is more than just ‘sports’. I want the kids to understand that movement, play, and daily smart nutritional choices is what ‘fitness’ is. You don’t have to be good at basketball, football, soccer, etc. to be seen as fit or an athlete.”

The program is doing so well, in fact, that he has opened it up to the community around the school, starting an after-school Staff WOD every Thursday afternoon. “I want to be able to show everyone what my kids are doing and how it can benefit them as well,” said Agbulos.

And that’s the same idea that Vice Principal Allyn Doyle still has. She isn’t done, telling Morning Chalk Up how she “watched as a group of girls walked up to the squat racks, unracked their bars, and busted out a set of ten back squats ranging from 55 to 75 pounds.  I remember thinking, this is the future of PE here at this school. There’s no way we can go back.”

“Part of the mission of a Catholic school is to teach and form the whole child, to facilitate the growth of their talents.  Guiding children on an innovative and perception-altering journey of health and wellness aligns beautifully with this mission,” Doyle wrote. “If we are to combat the growing problem of childhood obesity, the solution is here in our schools.  I think we need to let people know what we are doing and show them how then support them in implementing something like it in their own schools.”