“B is for Burpees” Teaches Toddlers (and Parents) About Functional Fitness 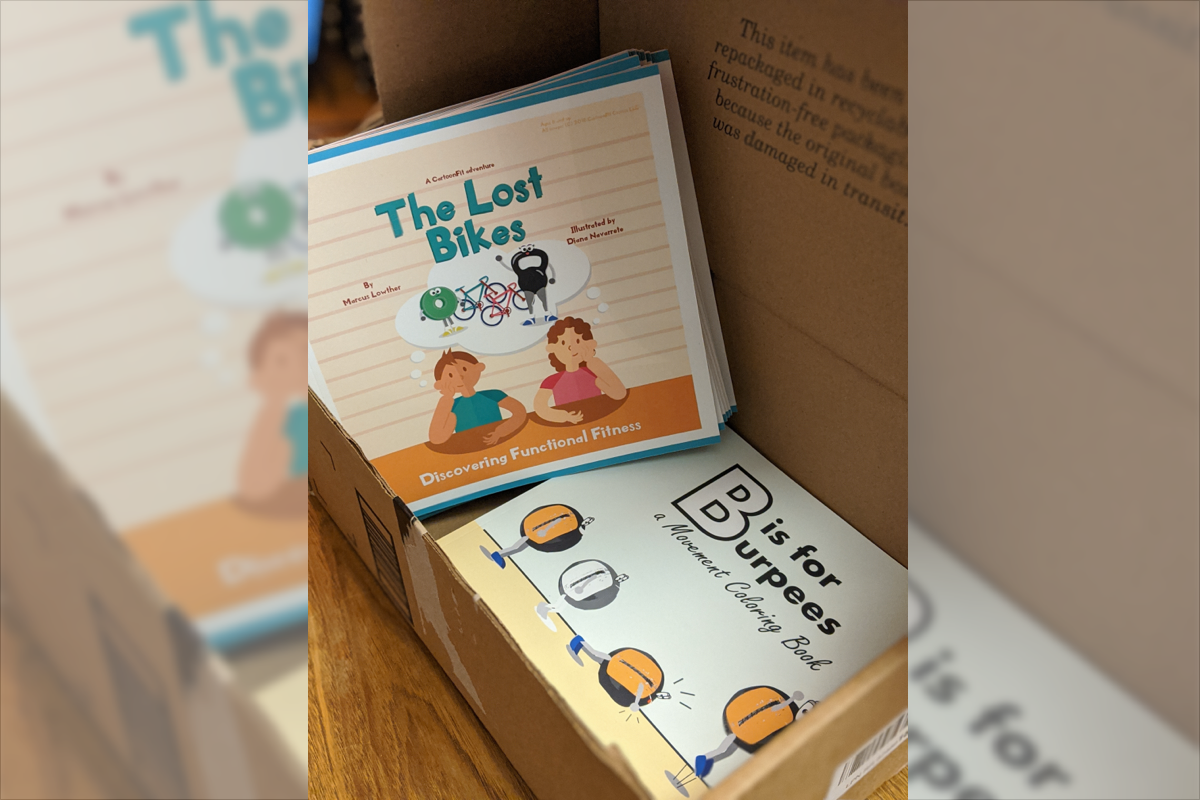 Every parent knows the phrase, “A is for apples.” But what about “B is for burpees?”

B is for Burpees is the third children’s literature release from CartoonFit Comics, a comic account inspired by well-known cartoons The Oatmeal and Dilbert that’s all about fitness. The author, Marcus Lowther, a CrossFit coach, uses humor as a “light-hearted entry into the fitness world,” for both kids and adults.

The books: Lowther started CartoonFit in 2016, as satire geared mostly towards adults in the CrossFit community. In 2017 he published his first children’s book, The Race Against Time, which brings functional fitness to life through the travels of two characters, Platey (an Olympic lifting plate with a face and legs) and Tina.

His second book, The Lost Bikes, tells the story of two children who discover functional fitness as they’re on the way to retrieve their bikes from the garage, their parents’ gym. Each piece of equipment has a personality to go with it, dividing them into two categories: the evil “Stationeries”, and the good “Mobiles.”

B is for Burpees: Lowther’s latest book – a coloring book of functional movements – is “something simple” that he thought more kids could appreciate. It’s a good chance for young athletes to see what their body can do.

Lowther has completed the CrossFit Kids curriculum, and thinks of B is for Burpees as a supplement to those concepts, “not a replacement.”

The book goes through the alphabet, attaching movements and illustrations to each letter: “F is for flexibility,” “S is for squats,” and “J is for jerk.” Characters from his previous books – Balloo, Platey, Belle – make appearances, along with drawings of well-known athletes, like Tia Clair-Toomey, who perform some of the words.

B is for Burpees is also translated into Spanish. Lowther, who is Black, says this was a way to encourage diversity and accessibility in fitness.

To translate the book, Lowther worked with his wife and translator to come up with equivalents and changed or added drawings. He gives the example of Z: in English, it’s for “Zzzz” (sleep), but in the Spanish version, it’s for zapatillas (sneakers).

In the future, Lowther plans to work on a story keeping diversity in mind, with more characters and children that would be “recognizable to minorities.”

The details: B is for Burpees, along with Lowther’s other books, can be purchased on Amazon. Lowther says the coloring book is both kid and parent-approved.