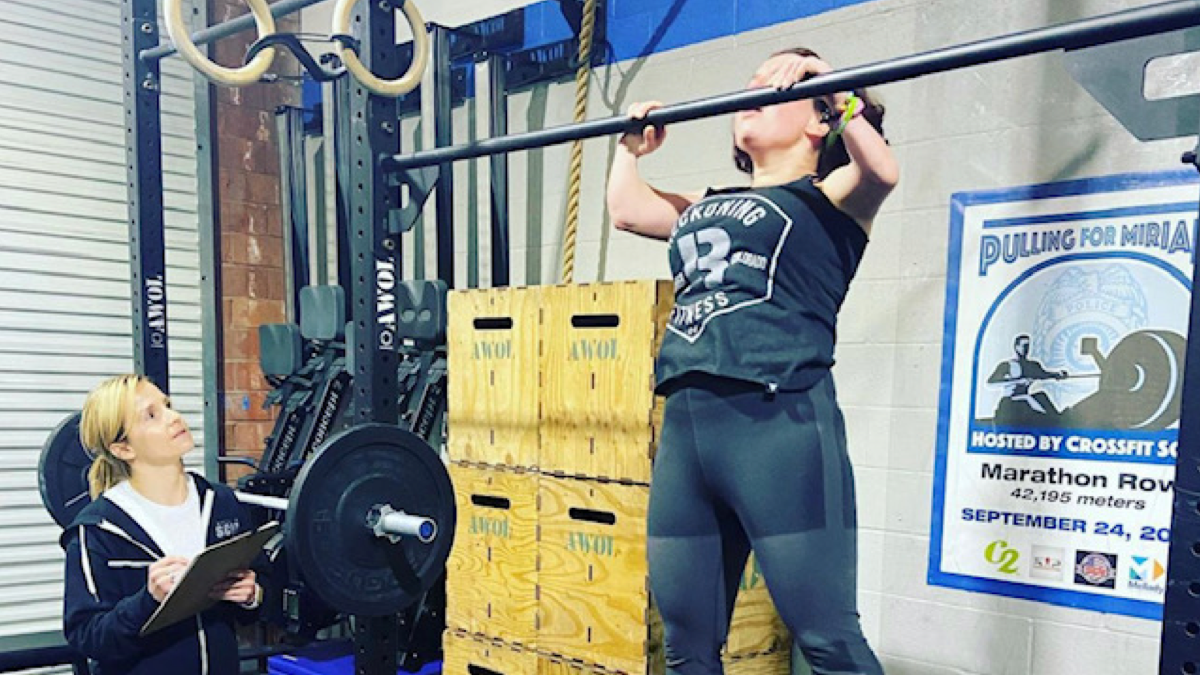 Growing up, Sara Vogler got used to being chosen last for any athletic activity she tried. She got used to feeling like there were just things she couldn’t do, like she just didn’t fit in.

That’s because Vogler, now 35, was born in Krakow, Poland with a severe form of a rare genetic disorder called TARSA syndrome. The condition means she was born without a radius bone in either forearm, causing her mobility in her hands and arms to be severely impaired.

Vogler’s condition led her family to immigrate to the United States so she could undergo what ended up being 17 surgeries to lengthen her arms and increase her mobility so she could live an independent life.

For years, Vogler perceived her disability as “a hindrance,” she explained, one that prevented her from having confidence in her physical abilities.

Three  years ago, encouraged by her sister who owns a CrossFit gym in Denver, CO, Colfax Strong Strength and Conditioning, Vogler decided to give CrossFit a try.

“She said there would still be things I’d be able to do,” said Vogler, who was skeptical at the time.

Regardless, Vogler reached out to the coaches at Balance CrossFit in Washington, DC, and they were adamant they could work with her.

“Don’t worry. Start coming and we’ll see what kind of adjustments we have to make,” Vogler said of what they told her.

To her surprise, the coaches were right.

“The moment I walked into the space, I was welcomed. Right from the beginning. It was a life-changing experience. They introduced me to so many different modalities, and all of a sudden things that were never open to me in a gym or fitness experience were available,” Vogler said. “It was just such an eye opening experience.”

Most recently, Vogler competed in the Women’s Upper Extremity division of the worldwide CrossFit Open and surprised herself when she did jumping pull-ups for the first time.

“There were a lot of firsts. There was just so much joy and excitement having the opportunity to be an official competitor,” said Vogler, whose dream is to compete at Wodapalooza in Miami, FL.

She added: “It meant so much to me. (Having an adaptive division) means that opportunities are finally opening up for people who have been disinvited so often. There are opportunities to be involved and engage, and part of a gym. Gyms are finally making sure there are options for a lot of different participants and individuals who may have some kind of challenges.”

Beyond competing, Vogler explained CrossFit has empowered her to believe she can do things she never thought were possible.

“I can do overhead squats with a PVC pipe, and I was using dumbbells (to lift overhead), but now I can lift a 15-pound bar overhead. Incrementally I have been moving up, and just to be offered all those things means a lot,” she said, adding that her entire mindset has changed.

“Now, I just find a way. I don’t think about it anymore like I used to . I just do things,” she explained. “CrossFit has opened my mind to what is possible. My fears and doubts of not fitting in have dissipated. Whenever I do a workout and I think I can’t push myself anymore, something happens in my mind where I take a breath and keep going. Whether it’s modified burpees or jumping pull-ups, the opportunity is now there. It’s like there wasn’t a window before and now it has been opened. It has been shattered.”

She added: “Now, my disability isn’t a hindrance. It’s a celebration of what I can do.”