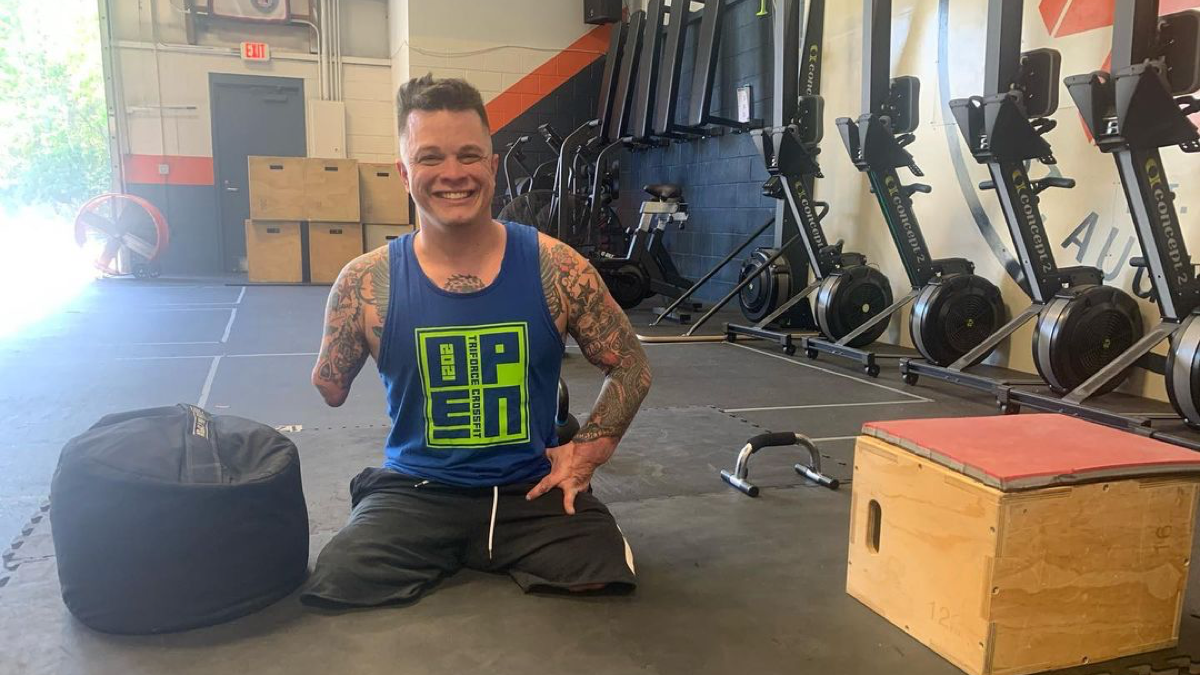 On May 5, 2010, while serving with the United States Marines in Afghanistan, 21-year-old Corporal Tyler Southern stepped on an improvised explosive device and “blew myself to smithereens,” he said.

The explosion blew off both of his legs above the knee and his right arm above the elbow, and also severely damaged his left arm.

“The last thing I remember was checking on my guys the night before at the post, and then waking up on (May) 18th,” said Southern, now 31. “I was on all sorts of drugs, which was a godsend so I didn’t wake up in a bunch of pain…I woke up to my mother explaining what had happened.”

Today, Southern is a father of two children, an avid CrossFit athlete at TriForce CrossFit in St. Augustine, FL and a spokesperson for many organizations helping veterans. And his most recent project involves helping his physical therapist Stephanie Aubrey launch a non-profit organization called Phoenix Regiment, an organization dedicated to providing veterans and first responders with free physical therapy and CrossFit.

Southern credits Aubrey with playing a huge role in helping him be as functional as he is today.

“The physical therapist in the hospital had a very set plan for me and it had nothing to do with what my goals were,” explained Southern, whose goal was to get good at using prosthetics and be a functioning, fit and active member of society.

“So after that, for a while I didn’t ever want to go back to physical therapy,” he explained.

Then in 2016, he was referred to a physical therapist for his back pain and was teamed up with Aubrey.

“She was way different. She thought outside the box and we actually talked about what I wanted to get out of therapy. She changed my perspective,” he said.

Changing his perspective helped him become his own catalyst in life and “focus on the good things,” he said. “Eventually the negative things stopped being such a glaring red flag in your face. You just have to get up and move.”

Five months ago, Aubrey convinced Southern to give CrossFit a try. He was skeptical.

“I had a very specific view of CrossFit and CrossFitters,” he said, and he wasn’t sure it was for him.

Turns out, it was.

In the last five months, Southern has seen quick physical gains and said he feels stronger and healthier than ever.

“There are a lot of things I didn’t even know I could try…like walking on his residual limbs,” said Southern, who can also do movements like front squats, box jumps, push-ups and sit-ups and is training to be able to do Murph.

Not only did he see quick physical gains, the community support Southern said he received the moment he joined was just what the doctor ordered.

When he started at TriForce CrossFit, he had just begun the process of separating and divorcing his wife, and he also underwent a surgery at Christmas time to remove an infection in his arm.

“I needed the level of the support that the CrossFit community gives more than ever,” he said. “After my surgery, people at the gym kept constantly calling me and telling me to come back.”

May 5 and Giving Back

The TriForce CrossFit community showed this support in a huge way most recently on May 5 — the anniversary of the day of the explosion that took his limbs — when they hosted a fundraiser to raise money for the Phoenix Regiment and to honor Southern’s sacrifice.

His whole gym did a workout they called “McNubs” (Southern’s nickname), which involved five rounds of 13 reps of various movements, 13 being representative of how many men were lost on Southern’s deployment.

Watching people work so hard for him, including gym members he had never met before, left Southern speechless.

“It was insane to me that they wanted to do it in the first place, but watching them all kill themselves over the workout, and do it in honor of me, was so moving. I got more sweaty hugs than I ever have in my life. But seriously, I don’t have the words,” he said.

He might not have the words, but the gesture only solidified Southern’s desire to give back, which he’s about to start doing through the Phoenix Regiment.

“I have always wanted to help people. That’s why I joined the military in the first place. But after what happened to me, I watched a ton of guys retire and go pear-shaped and their physical health deteriorates and their family suffers again, so I don’t like the idea of leaving guys like me out in the lurch,” he said.

“So this is the least we can do for people who put their lives on the line.”