The Magic Behind Mayhem Athlete According to Director Jake Lockert: “We Have an Incredible Team”

Mayhem is one of the most prominent camps in the industry; as we noted in our in-depth article in July, the Cookville-based global goliath had over 175 athletes competing in Semifinals in 2022. What originally started with “What’s Rich Doing?” years ago, has grown to more than a dozen different tracks to support individuals and affiliates around the world. What contributes to the program’s success? We caught up with Director of Mayhem Athlete, Jake Lockert, to find out.

“What we’ve done is we’ve just tried to make it as good as possible, and we’ll work until we’re beyond our bandwidth. (Then) it’s like, alright, we got to bring someone to help do this,” Lockert said. “The biggest thing recently is we’ve had another auditor come on to check for errors.”

Thoughtfully expanding the team not only helps catch and prevent mistakes, but also can add tremendous value. Bringing thought leaders on to the team is a strategy being utilized by many training camps, and at Mayhem, they have subject matter experts Chris Hinshaw leading Aerobic Capacity and Sage Burgener running weightlifting (Burgener Strength). And, of course, Rich Froning overseeing the Compete track as a whole.

As they’ve continued to grow the team, providing each contributor with autonomy has allowed Lockert to focus more on the big picture.

“I would say empower people — I’m not a micromanager. I’ll make sure the products are really good, but once I’ve trained someone or we’re training someone, we’ll support them, we’ll check their work, make sure it’s that level, but we give them freedom within that to create (and) make it better. I really want them to make it their own,” Lockert said. “Our team is…I can’t speak highly enough. They kill it…we have an incredible team.”

While the people behind the scenes are a key component to Mayhem’s upward trajectory, a reliable leaderboard and great workouts are important ingredients of any remote program. Last week, Froning poked fun on his Instagram at the problem of athletes occasionally submitting a dishonest score on a workout. Despite the friendly reminder, Lockert says leaderboard policing isn’t something their squad generally engages in.

“People get so frustrated because they know that person is not as good as they say they are on the leaderboard. And then sometimes I think some people just have a home run and they just went for it, and maybe they’re not that sick, but they just had a great day. So really, we don’t police it just because we can’t do it. When someone signs on, they get ‘frequently asked questions’ and (we) talk about the leaderboard. If you didn’t do exactly as written, then it’s scaled. We say, just remember who you are. It’s not that big a deal. I love the leaderboard; it gives me something to push forward, but don’t put your self-worth in it.”

In this same conversation, we talked in-depth about how to write workouts for multiple skill levels, nuances of online programming, where the inspiration comes from when naming their workouts and more. Watch or listen to the full interview. Coffee Break Conversations are exclusive to our RX members, which gives you access to interviews like this every single week, and you can join for just $1 here. 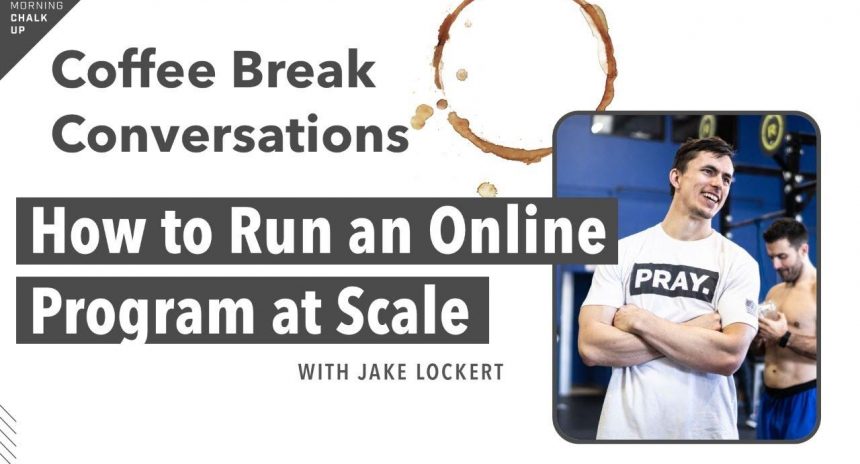