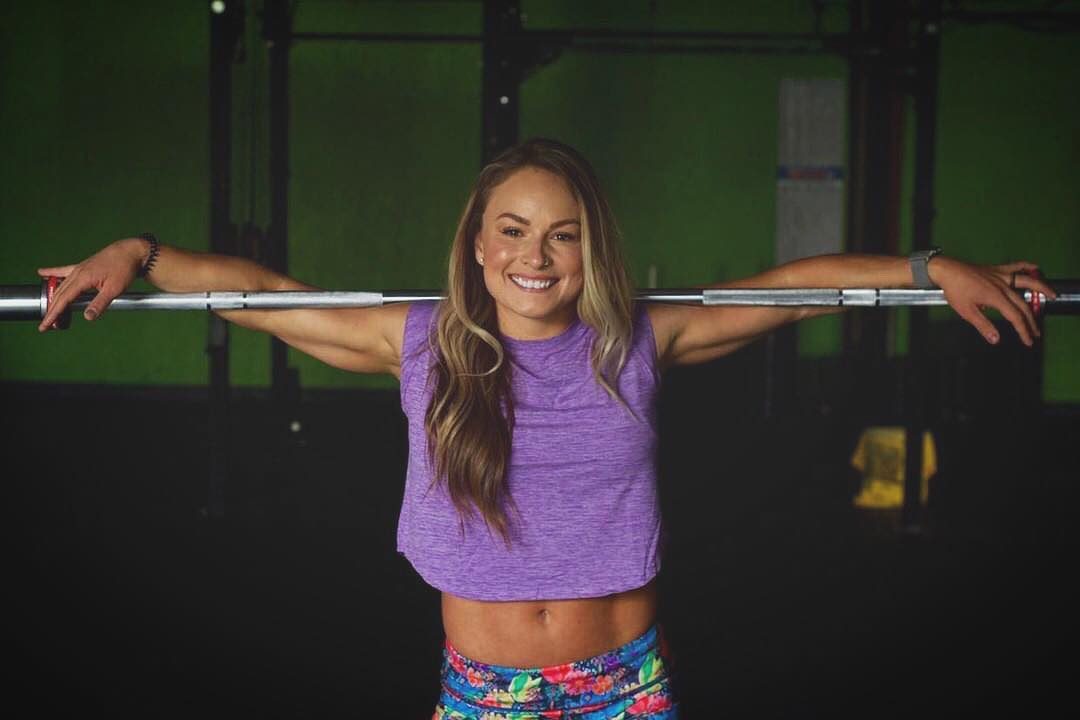 Courtney Donmoyer is a three -time regional athlete, coach at CrossFit Gamma in Hershey, PA and personal nutrition coach with a 14,000 plus social media following who shares her health and fitness tips, coffee brewing skills and her life with her dogs, chickens, and husband. You’d never know that when she started CrossFit a decade ago that she hated, absolutely hated, CrossFit.

When she started CrossFit in Ft. Hood, Texas it was because she desperately wanted to join the military. But at 5’ 2” and weighing in at 100 pounds, she needed to put in some work first if she was going to be taken seriously.

“It was never vanity. It was never about weight loss. Or looking a certain way. It was purely about gaining respect and being useful —  while also not being a limp noodle that couldn’t fend for herself,” Donmoyer told Morning Chalk Up. “Like I do anything in life, I threw myself into the movement. CrossFit was such a high speed, elite thing back then. Any girl lifting real weights or doing pull-ups was sort of like seeing a unicorn in a corn field.”

Turns out, her frame was perfect for CrossFit and the more she did it, the more she loved it. In 2012, she started coaching and realized she had found her calling.

“It was never vanity. It was never about weight loss. Or looking a certain way. It was purely about gaining respect and being useful —  while also not being a limp noodle that couldn’t fend for herself.”

So when an overseas contracting opportunity with the Army through Morale, Welfare and Recreation (MWR) came up for an experienced CrossFit trainer, she took it. Donmoyer started her one year contract at CrossFit Arifjan in Kuwait in September of 2013.

During her onboarding for her position at CrossFit Arifjan, she watched a video of a solider leading a class of Army CrossFitters. She was impressed by how well he commanded the room. “I remember watching this video of him, addressing a large group of CrossFit-soldiers, and being taken by his presence. It’s very commanding.”

Donmoyer flew out to Kuwait to start her new job. That soldier, an Army Engineer named Travis, was one of the athletes in the box she would begin to coach. A few months later, Travis ended his deployment and headed home to Pennsylvania.

“I whipped votes for the soldiers when they wanted new equipment or to update class times on the schedule. I coached, I mentored, I arranged funding, ran the building in which the non-profit army affiliate was housed, and arranged frequent in-house competitions to keep their morale up,” said Donmoyer.

But it wasn’t just keeping their morale up. It was also getting them to take CrossFit back home with them when they left Kuwait. One of the things Donmoyer made sure she did was encourage every soldier to take the CrossFit L1 Certification Course.

“I encouraged every soldier to take the weekend [L1] course. I helped them prep, study, work through the 10 fundamental movements, and review the guidebook. We started a shadow program, so new coaches could shadow me or a soldier-coach and get some coaching experience while they were deployed…And many of these soldiers are coaches today… became competitive CrossFitters, or went on to judge or volunteer at the Games or Regionals. Some of them opened their own affiliates,” said Donmoyer.

With Donmoyer’s help, dozens of soldiers ended their deployment in Kuwait with an L1 certificate, heading home equipped to coach in their own communities.

After deciding not to renew her year-long contract, Donmoyer moved to Connecticut to open a box. One weekend, walking into a weekend long USAW seminar, and who does she see sitting in her gym, waiting to take the seminar?

I encouraged every soldier to take the weekend [L1] course. I helped them prep, study, work through the 10 fundamental movements, and review the guidebook…And many of these soldiers are coaches today… became competitive CrossFitters, or went on to judge or volunteer at the Games or Regionals.

Travis from Kuwait. He had driven the four hours from Pennsylvania to Connecticut for the course.

Come Monday, the two were inseparable, managing a long-distance relationship for a year before Courtney packed herself and her dog up into her car and moved to Pennsylvania.

Travis and Courtney were married on Christmas Eve of 2016. When Travis isn’t deployed, the two train at CrossFit Gamma. Courtney still coaches him.