Shadburne, Shaw and Odd Squad Rise to the Top in Buenos Aires 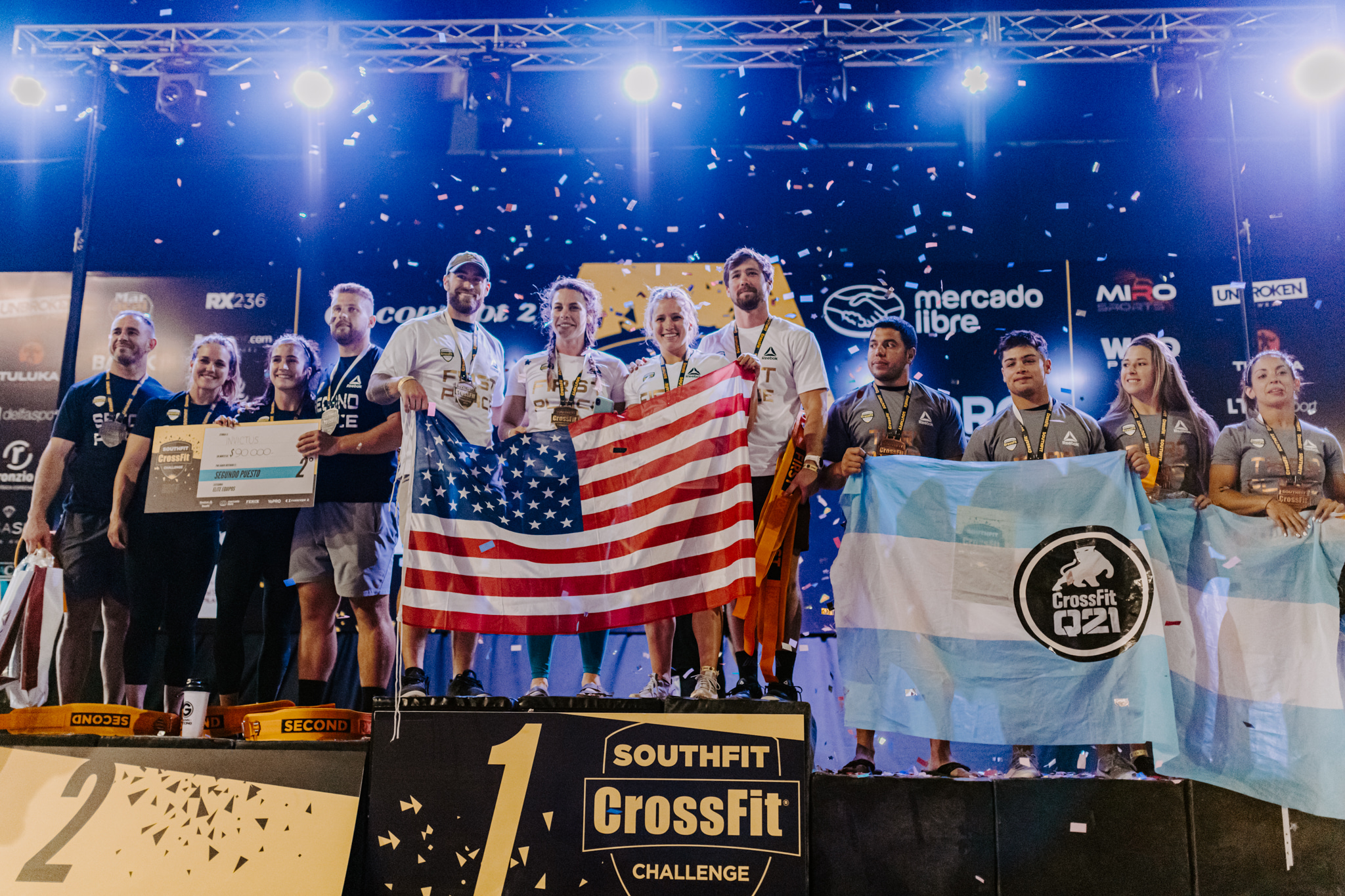 The final day of competition at the SouthFit CrossFit Challenge was action-packed and full of drama as both the team and men’s individual winners were decided in the final event. On the women’s side a familiar face punched her ticket to the 2020 Games.

Team Odd Squad carried their day 2 dominance into the final day of competition as they once again swept the final three events to secure their invite to the 2020 Games. The team of Alexis Johnson, Emily Tanner, Jordan Cook and Brandon Luckett finished just ahead of Argentinian team Q21 by 26 seconds to claim the event win. The leaders heading into day 3, Invictus, placed third, knocking them out of the top spot.

In event 6, Odd Squad and Invictus battled back and forth in an action-packed workout that featured thrusters and touch-and-go rope climbs. Odd Squad grabbed the event win finishing four seconds ahead of Invictus. Q21 placed third with their fifth top-three finish of the weekend.

Five rounds of ten worm cleans awaited the teams in the final event. Odd Squad just needed to finish ahead of Invictus to claim the Sanctional victory and Games invitation. Any pressure the team felt was quickly put to rest as they jumped out to an early lead and coasted to their seventh-straight event victory. Team Colombia finished second, over a minute behind Odd Squad, followed by Invictus.

At 30 years old, Canadian Pete Shaw will be making his first Games appearance as he held off Games veteran Jay Crouch for the Sanctional win. The longtime Regional competitor rallied from a tough start to day 3 with back-to-back event wins to secure his invite.

Shaw opened the day with a 13th place showing in event 5 as Argentinian Ivan Gaitan won the event, followed by the Australians Crouch and Zeke Grove in second and third, respectively.

With Crouch atop the leaderboard heading into event 6, Shaw was able to beat him to the rope for two touch-and-go rope climbs and sprinted to the finish line to cut into the lead.

Shaw trailed Crouch by 13 points heading into the final event and needed a huge performance to overtake him. Shaw delivered as he won and got help from fellow Canadian Stephane Cossette and Argentinian Gonzalo Duro, who each placed second and third to clinch the Games invite for Shaw. Crouch would place 6th in the event.

Shaw turned the 13 point deficit into a 12 point win over Crouch in the final leaderboard. Duro placed third followed by Grove in fourth place.

The leader heading into day 3, Bethany Shadburne, started the day with a third place finish in event 5 as Andrea Solberg claimed her second event win of the competition. Argentina’s Fittest Woman, Melina Rodriguez, edged Shadburne for second, finishing just one second ahead of the Eighth Fittest Woman on Earth.

In event 6, Maria Valentina Gottardello won her first event of the competition. Shadburne placed second as she beat Madeline Sturt by two seconds in a sprint to the finish.

Shadburne ended the Sanctional the same way she started it, with an event win. Event 7 featured an 18 calorie ski, 25 toe-to-bars, 18 calorie bike and 25 hang power cleans at 45kg/100 pounds. She led from start to finish to claim her fourth-straight individual invite to the Games. Gottardello placed second, one second ahead of Sarah Viets.

Madeline Sturt came in 2nd and Andrea  Solberg took 3rd, joining Shadburne on the podium to round out the top three overall finishers.