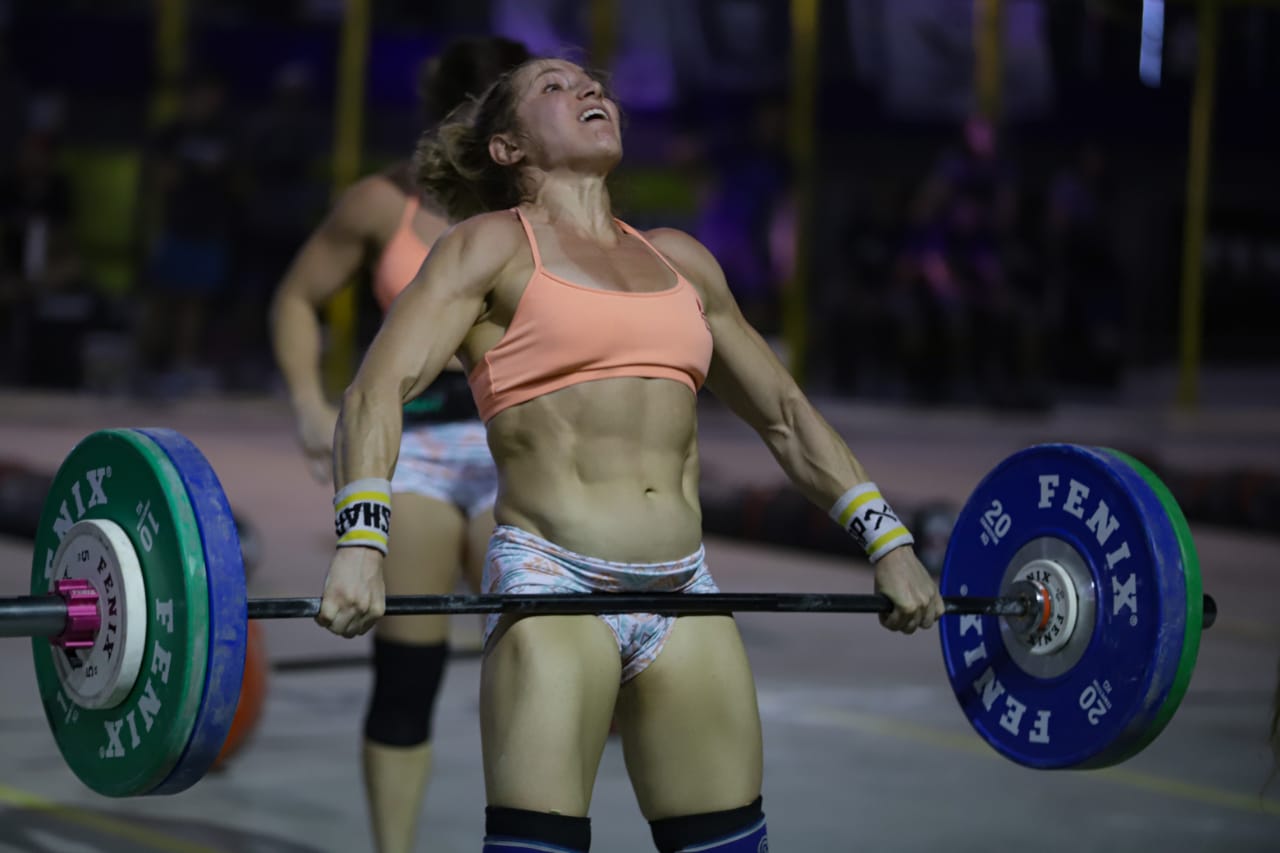 The action shifted to the DirecTV Arena for Day 2 of the SouthFit CrossFit Challenge in Buenos Aires, Argentina. The leaders remained the same in the elite divisions but their competition kept within striking distance of a 2020 CrossFit Games invitation. Argentina national pride was also on display as the local crowd witnessed their countrymen and women put on a show.

Event 4 featured two parts with two separate scores. For the first half of the workout, teams had to pick up the worm, this time for shoulder-to-overheads, with synchronized toe-to-bars and bar muscle-ups mixed in-between.

Part two of event 4 was a one rep max snatch. Odd Squad made it three-for-three for Day 2 event wins as they combined to snatch 416kg/917 pounds. Invictus collected their third runner-up finish of the day with a combined weight of 400kg/881 pounds. Team Colombia placed Third just ahead of Q21.

Odd Squad’s Day 2 sweep of events propelled them into Second, just five points behind Invictus.  Q21 sits in Third, fifty points off the lead followed by AAS and Team Colombia in fourth and fifth respectively.

Argentina’s Fittest Woman, Melina Rodriguez, bounced back from a disappointing Day 1 by winning event 3 with a time of 8:39 ahead of Bethany Shadburne (9:03) and fellow country woman Maria Valentina Gottardello (9:29). Madeline Sturt finished 4th and Andrea Solberg came in 5th.

Part 2 of event 4 consisted of a one rep max snatch. The Argentinian crowd were treated to a display of strength by their home-grown athletes. The Argentinian woman swept the top-three spots with Mara Vazquez dominating the event with a winning lift of 87kg/191 pounds. Gottardello collected her second top-three finish of the day with a lift of 81kg/178 pounds to place second. Rodriguez, Alexia Williams and Delfina Ortuño tied for third with lifts of 80kg/176 pounds. Sarah Viets placed sixth with a 78kgs/171 pounds to claim the top non-Argentinian placing.

Shadburne increased her lead atop the leaderboard with her three top-ten finishes on Day 2. She holds a 24-point lead over Sturt and 28-point lead over Solberg. Viets moved up a spot to fourth place followed by Gottardello in fifth.

A pair of Australians and Games veterans fought it out in event 3 with Zeke Grove taking the victory with a time of 8:26 ahead of Jay Crouch. Argentinians Nicolas Bidarte (3rd) and Gonzalo Duro (4th) finished behind the Australian countrymen.

The men had to row 1,000-meters followed by 100 double unders and 30 burpee box jump overs for three rounds in the first part of event 4. Americans Matt Morton and Isaiah Vidal tied for first place with a time of 18:50. Canadian Pete Shaw finished ten seconds behind the leaders to take Third while Jake Marconi and Jay Crouch finished 4th and 5th respectively.

In the one rep max snatch, 19-year-old Chilean Benjamin Gutierrez won the event with a lift of 125kg/275 pounds. Argentinian Agustin Guiñazu and Canadian Stephane Cossette tied for second place with lifts of 122kg/268 pounds.

The leaderboard saw no change in the top three spots in the standings. Shaw holds just a four-point lead over Crouch for the coveted Games invitation. Duro is in Third, just 14 points off the lead. Grove was the biggest mover of Day 2 as he moved into 4th, 30 points behind Shaw.

What’s in store for Day 3

The final day looks to be an exciting one as all three Games invites are still up for grabs. Event 5 features pistols, handstand push-ups and deadlifts for both teams and individuals. The final event will include touch-and-go rope climbs and thrusters for both groups.

Click here for all leaderboards and schedules for the event.