Not That Fit: Getting Jacked with Iceland’s Strongest Viking 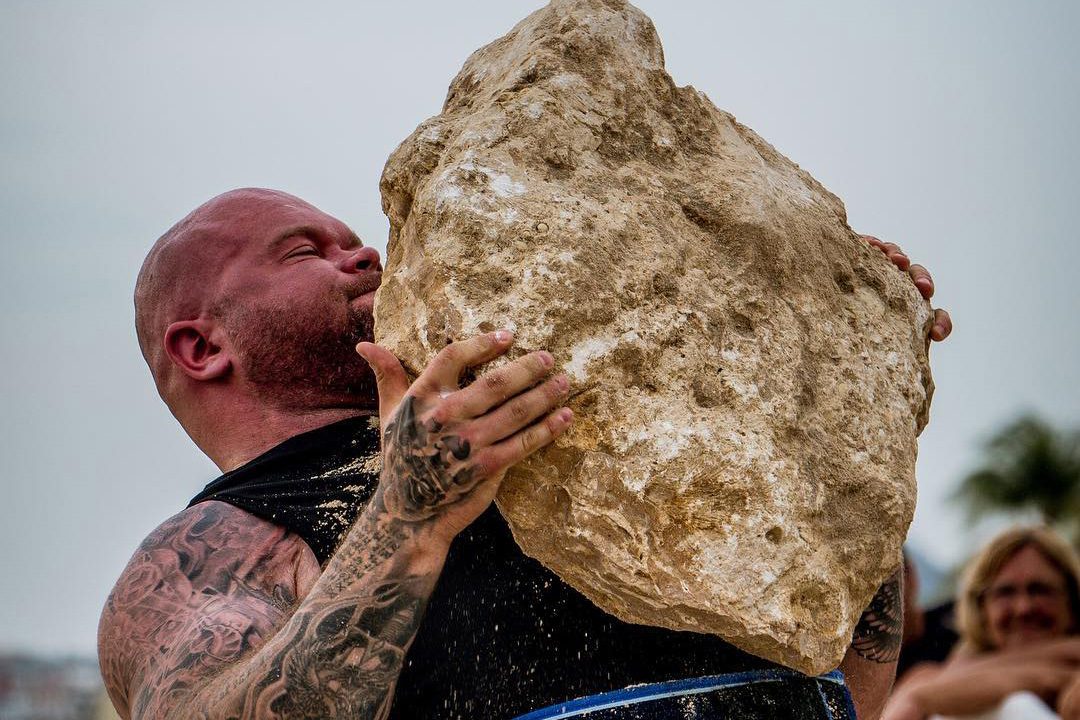 CrossFit has made its name on the idea of “constant variance,” but when it started, the workout program was barely that. At the first Games, in 2007, there were just three events: a rowing buy-in with a pull-up/push jerk couplet, a 5k trail run, and a one-rep max in the back squat, press, and deadlift. Compared to a 5x5 globo-gym lift sesh, maybe this is constantly varied, but it’s not by the standards of what fitness is today.

Now, elite athletes can expect criterium road races, yoke carries, ocean paddleboarding, marathon rows, and handstand obstacle courses. At a Rogue invitational in 2019, they even had to tackle a simulated biathlon, and inevitably, what happens at the Games — the pegboards, the ruck sacks, the open water swims — trickles down to what we do in the gym.

More than ever, regular athletes are tested in the ten components of fitness: endurance, stamina, strength, flexibility, power, speed, coordination, agility, balance, and accuracy. If you want to test your proficiency in each, Ben Bergeron gives some great suggestions on his podcast, “Chasing Excellence,” but what if you’re looking to improve? How could we go about mastering not just one, but all of them?

To find out, I spoke to elite athletes outside of CrossFit, not just powerlifters and ultra-marathoners, but also professional climbers, circus artists, and hip-hop choreographers. Each Wednesday for the next ten weeks, I’ll be sharing one of those interviews to help you — and me — improve in a different aspect of fitness.

Up first, the belle of the CrossFit ball: “Strength.” For the past eight years, I’ve wanted in on the 1,000-pound club. I’m still about 200 pounds shy, so I spoke with Iceland’s Stefán Sölvi Pétursson, a four-time World’s Strongest Man competitor whose records are 507 (230 kilos) for bench press, 727 pounds (330 kilos) for back squat, and 860 pounds (390 kilos) for deadlift.

Pétursson won his first competition and became Iceland’s Strongest Viking in 2005, when he was 19 years old. Growing up helping his grandfather on a farm, Pétursson had always been a strong kid, even though he had no clue what he was doing at first. He did biceps every day, and even when he found a gym where a four-time World’s Strongest Man worked out, they still didn’t have a structured training program.

Gradually, though, he learned to handle the strongman implements, especially the Atlas Stones. His advice to me was this: When you go to pick one up, you want to bend over with mostly straight legs like you’re doing a stiff-legged deadlift, not an air squat. Then, interlace your fingers underneath and squeeze your forearms and palms together. At this point, do not bend your arms. That’s the rookie mistake.

If you have to get the stone to a certain height, squeeze it into your torso while you push your hips forward, like the pull on a snatch. Then, throw it up and drop below so you can place it on your chest. For Pétursson, who’s 6’ 5”, this is typically all it takes to get the stone on top of the platform. At 5’ 9”, I’ll need to maneuver it on top of my shoulders.

Still, good form will only take us so far. Besides the obvious (eat more, train more, sleep more), how do we get truly yolked? Like, crushing pumpkins between our thighs strong? The first step is humility, says Pétursson: “If you want to be really, really, really strong, you have to have the courage to train with light weights.”

I thought I’d already learned that lesson. In 2012, I got a little too ambitious doing parkour, over-rotated a flip, and broke my neck, so I’m sensible enough to scale during workouts. But on pure strength days, it’s a different story. I add plates until I fail the lift, which is the opposite of what Pétursson recommends.

A light axle with heavy accessory work was the inverse of how I would’ve approached this situation, but Pétursson says he wanted to build confidence, not just strength. “Training is about always feeling the same way, no matter the weight,” he says. “It’s kind of like brainwashing. You never want to fail the lift.”

Fifteen weeks later, Pétursson hit the clean and press twice. Then, he bumped up the weight and went to failure. For this one lift, at this one event, I could understand that approach, but always training without hitting a PR until competition? Isn’t he curious how much he can lift? How much he’s improved by and where the lift is getting stuck? “That’s the ego you check at the door,” he says. “You learn how to ignore it.”

Alright, Stefán. Message received. Keep my arms straight on the Atlas Stones and don’t fail a lift until I’m doing the clean ladder at the CrossFit Games. Still, even with these recs, I’m feeling #NotThatFit, so join me next week for a conversation with ski aerialist, Cirque du Soleil performer, aspiring stuntman, and overall badass Jon Vellner (yes, related to Patrick. The genes in this family are wild). He and I will be discussing what is perhaps the least understood of the ten components: accuracy.