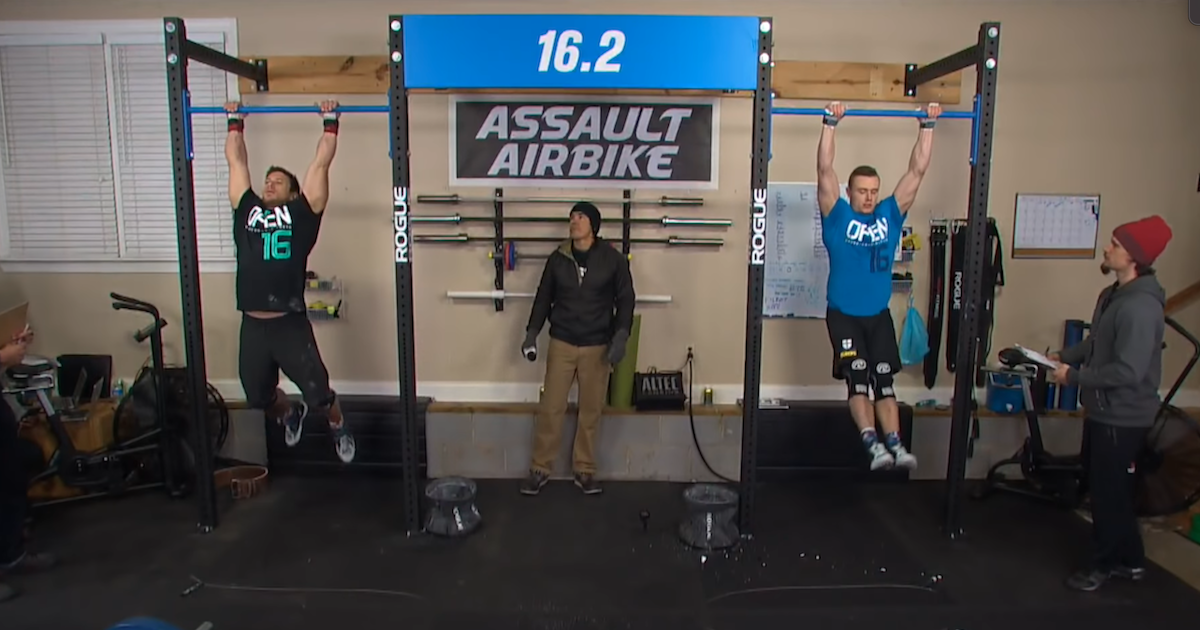 CrossFit found a new way to get the community involved during the 2016 Open season. Dave Castro took the 16.2 announcement outside of a gym or a convention center and brought it to Candler, NC. The media team set up in a community member’s garage gym on a cold and snowy evening. The weather was frigid, to the point that the camera lens fogged after entering the garage.

While 16.1 focused on engine, 16.2 tested athletes in a very different way. They had to put their strength on full display while dealing with an elevated heart rate. The workout consisted of 25 toes-to-bar, 50 double-unders and a decreasing number of squat cleans with increasing weight. Each segment had to be completed in a four-minute block of time.

Despite the frigid temperatures outside, both Bailey and Gudmundsson lined up for the workout while wearing shorts and t-shirts. They got to work quickly and matched reps — though Bailey took a slight lead and finished the first block ahead of Gudmundsson. Bailey, the fourth-fittest man at the 2015 CrossFit Games, continued to increase his lead as the third-fittest in Gudmundsson took longer breaks.

Bailey and Gudmundsson went unbroken on their toes-to-bar and double-unders during the first two rounds but opted to do singles on their squat cleans. They both began taking breaks on the third round while fully settling into a routine. This pattern continued throughout the fourth round and into the fifth.

Bailey finished the fourth round at 14:30, leaving him more than five minutes to do his final set of toes to bar, double unders, and squat cleans. Gudmundsson joined him on the final round at 15:21. Despite having to clean 315 pounds seven times at the end of a long workout, there was still an opportunity for both men to finish 16.2.

Bailey had three minutes to complete his final seven squat cleans. He finished the first two in one minute, at which point Gudmundsson joined him on the final set. Both men continued to work as the end of the time frame approached, but it became evident that only one had an opportunity to finish.

The Games veteran in Bailey walked up to the barbell with 15 seconds remaining and attempted his final rep. He received the bar in the squat position and then strained to stand upright. The veins in his neck bulged while the small crowd roared with excitement. Bailey completed the lift, dropped the bar, and raised his arms in triumph. Meanwhile, Gudmundsson finished his fifth clean before the time cap and ended the workout with 428 total reps while the crowd continued to cheer for both athletes.

The victory in the frigid garage created excitement during the Open announcement, but it was short-lived. Drama surfaced later that night in the form of a statement from CrossFit. The company said that Bailey’s 16.2 score was withheld.

With the stunning Open announcement, Gudmundsson became the unofficial winner of the head-to-head matchup with 428 reps. Bailey later posted a score on the leaderboard of 429 reps. Both he and Gudmundsson completed the Open and then headed to their respective Regionals with the goal of returning to the Games. Bailey finished seventh in the California Regional, below the cutoff line, while Gudmundsson won the Meridian Regional. He went on to the Games in Carson and finished eighth overall.