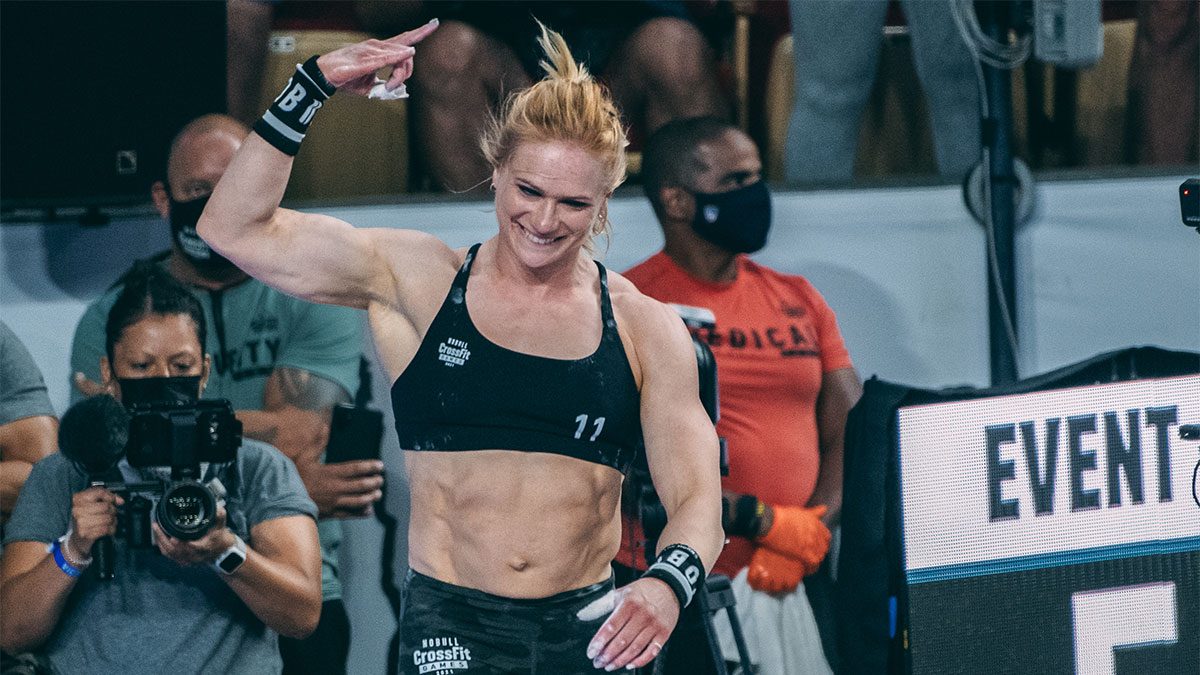 Annie Thoridsdottir’s patented smile was nowhere to be seen during the final event at the 2021 NOBULL CrossFit Games.

She looked focused, almost fierce, as she worked her way through the 600-meter row, 90 chest-to-bar pull-ups, and 108-feet of 135 pound/60kg lunges that led to the finish line.

Thorisdottir was on a mission- To make it to the podium at the finish line before Norway’s Kristin Holte, so she could stand on the real podium.

Making history: Thorisdottir has become the first woman to get back to the podium at the CrossFit Games within a year of giving birth. She’s also the first mother to podium since Valorie Voboril in 2013.

August 2020: Thorisdottir gave birth to Freyja in a traumatic delivery that lasted multiple days, a labor that resulted in a blood transfusion from losing so much blood, leaving her so weak she “could barely stand by myself,” she explained.

One week postpartum: Thorisdottir left the house for the first time since giving birth, leaving her daughter with her mother, to go for a walk with her husband. She felt relieved, an experience she described as finally being able to see colors again.

Two weeks postpartum: Adjusting to motherhood, Thorisdottir now realized that she wanted more. “I’m not saying being a mom isn’t enough, and taking care of your child isn’t enough…it is a full-time job,” she said. But at the same time, she knew she wasn’t done being a professional, elite athlete.

One month postpartum: Thoridottir was back at the gym regularly, but she wasn’t at all focused on making it back to the CrossFit Games this summer.

Four months postpartum: “Things don’t always go the way you expect them to. I gave birth to my beautiful, healthy daughter four months ago today, and to be brutally honest, these last four months have been harder than the last four of my pregnancy. I have been an athlete my whole life and the way my body performs and looks, (has) always been a big part of how I would define myself. The changes that my pregnancy and difficult birth brought along has challenged me more than I expected. My expectation was that I would be able to bounce back, maybe after 8-10 weeks of easing back to my old ways and then start building capacity and strength. However, the progress has been slow—steady—but slow,” she posted on Instagram.

Five months postpartum: In an interview with the Morning Chalk Up, Thorisdottir said she was, once again, thinking about the CrossFit Games, this time with a new reason to compete.

Nine months postpartum: Thorisdottir continued her rise, finishing an impressive ninth overall in Europe in the Quarterfinals, a weekend that included third and a 4th place event finishes.

10 months postpartum: Thorisdottir performed like she was back to her old self at the online CrossFit Lowlands Throwdown semifinal, easily punching her ticket to her 11th CrossFit Games with a third place overall finish.

One year postpartum: Thorisdottir was consistent on the first two days of competition at the CrossFit Games, performing well enough to enter Day 3 in 8th overall. After that, the real climb began.

Thorisdottir handled the task with relative ease, finishing 37 seconds ahead of Holte and earning herself a historic, emotional podium finish, a moment the CrossFit community will remember for a long time.