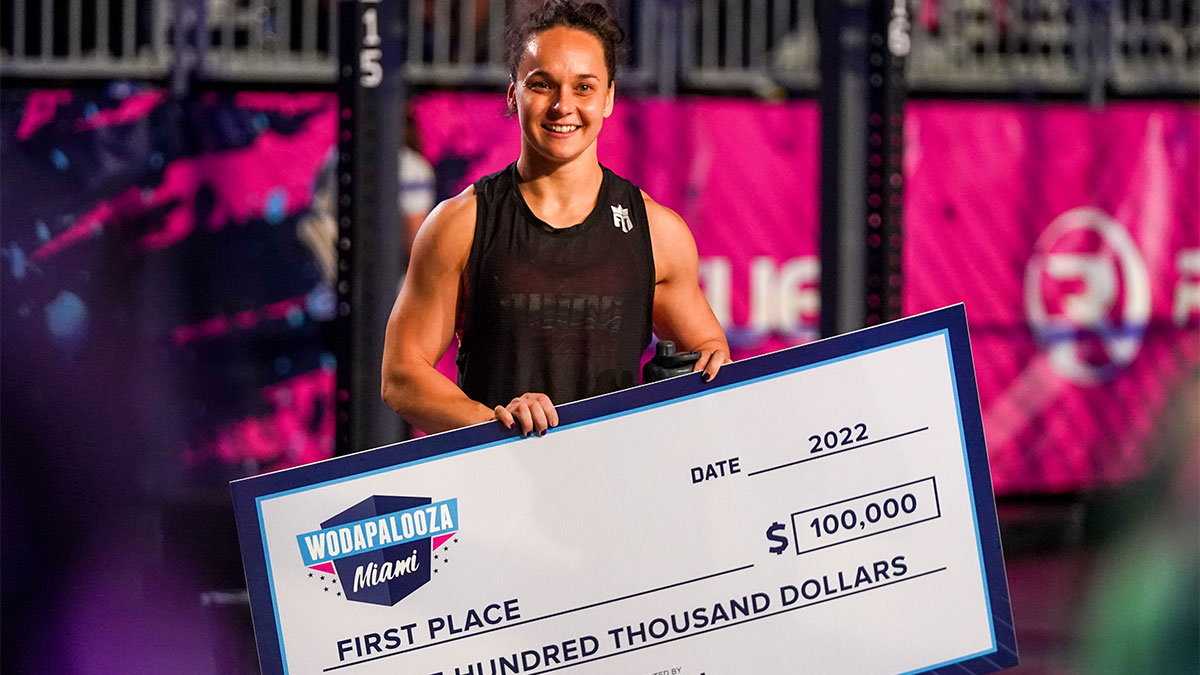 It’s never over until it’s over: this couldn’t have been more true on the final day of Wodapalooza in Miami.

After leading since the very first event on Thursday, Australian Ellie Turner plunged from first to fifth in just one event on Sunday, and eventually wound up in sixth overall, while Arielle Loewen, who spent much of the weekend sitting in seventh overall, snuck her way onto the podium behind winner Emma McQuaid and second place finisher Bethany Shadburne.

The men’s competition was equally exciting, as the final day saw Alexandre Caron and Samuel Cournoyer jump from fourth and fifth into second and third respectively in the final two events, bumping Phil Toon out of the top three for the first time all weekend.

As impressive as Vellner was all weekend, easily taking his third consecutive Wodapalooza by 59 points, fellow Canadians Caron and Cournoyer’s performances on Day 4 can’t be overlooked.

Caron found himself within striking distance of the podium for the large part of the weekend, but Cournoyer spent the first two days sitting in seventh, and entered into the final day of competition back in fifth.

Both Canadians finished their weekends with two strong performances—third and second for Caron, while Cournoyer took Event 7 and finished solid with a sixth place in the final event.

“I think I never really come into these weekends thinking about the win, not right off the bat,” said Vellner after he’d won. “You kind of come in to test the waters, see where you’re at. There’s always new CrossFit athletes popping up, so every competition is a chance to see where you stack up and try to make yourself proud and see where your training’s at.”

McQuaid’s Wodapalooza weekend was a bit like the fairy tale The Tortoise and The Hare, McQuaid, of course, being the tortoise. She wasn’t flashy, but she was steady and consistent, chipping away all weekend, but was never in the lead until the end of the final event.

After Day 1, McQuaid found herself in sixth overall. On Day 2, she climbed into second but was 36 points out of first, a point spread she cut to 24 after Day 3.

McQuaid continued her steady quest on Sunday, finishing the competition with two more consistent, but quiet finishes—seventh in Event 7 and third in Event 8—doing just enough to edge out Shadburne, who finished just nine points behind McQuaid.

“It was incredible,” she said. “I enjoyed every single event, and the atmosphere was amazing.”

The Boys team, made up of Games athletes Noah Ohlsen, Travis Mayer and Chandler Smith entered the final event so far ahead of the field that they only needed to come 20th to win. Considering their competition so far had included four event wins, a second and two thirds, they were as close to a lock as it gets.

Ironically, The Boys had their lowest placing of the entire competition on the final event—sixth—but still more than enough to win by 45 points over Thunder From Down Under, a team that included Australians James Newbury and Khan Porter along with American Matt Dlugos.

After the win, Smith humbly credited his teammates: “These guys happen to be really strong, so it made it pretty easy.”

After a back-and-forth battle all weekend, Team Kriger, a Norwegian team made up of Kristin Holte, Ingrid Hodnemyr and Lena Richter, entered the final event three points ahead of MayFem, another powerhouse team made up of Haley Adams, Andrea Nisler and Taylor Williamson.

In the end, it was Kriger all the way. They finished the WZA OC Remix 44 seconds ahead of MayFem, proving a team from Rich Froning’s Mayhem might just be beatable after all, and creating a perfect ending to Holte’s long and highly respected competitive CrossFit career.

In a post-event interview, Holte was emotional when she confirmed this would be her last competition. “This is like the perfect way to finish it off,” she said, wiping away tears.