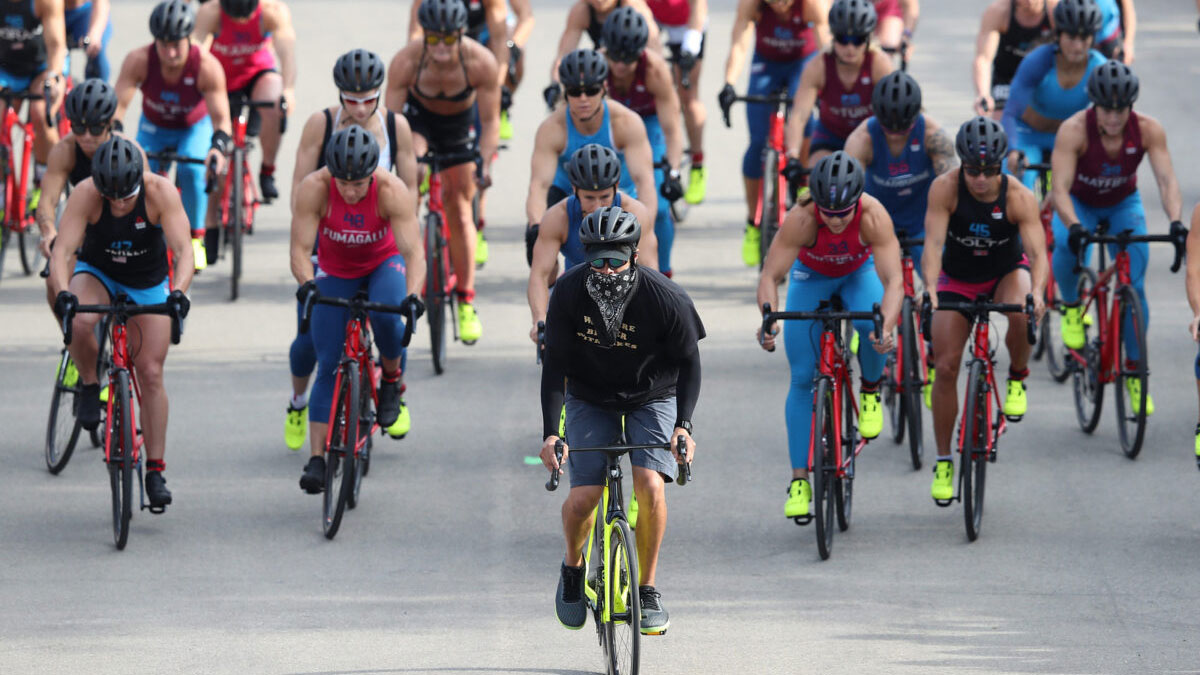 Finally, we reach the pinnacle event, and the pinnacle of Dave Castro’s programming; the final stage of each competitive season since 2007: the CrossFit Games. However, if you haven’t read the previous two pieces about the Open and Regionals we encourage you to go back and do so, many implements from the Games have borrowed from the qualifying stages, and many elements of the Games have similarly found themselves in earlier stages of the competition a few years down the road. So for the most comprehensive understanding of the genius and continuity of Castro’s programming legacy, go check those out and we’ll see you back here shortly.

The Unknown and Unknowable

Is there really any place to start but here? These four words are synonymous with the CrossFit Games, especially for those that were around when it all began, at Dave Castro’s Ranch in Aromas California in the summer of 2007 with the second CrossFit Games workout of all time: The Hopper.

This workout, and this concept are so important and iconic for both the sport and the methodology of CrossFit. And, as we’ve been discussing, Castro has managed to maintain the integrity of baseline CrossFit principles even as the sport has exploded in the 15 years since.

In the Level 1 manuscript exists the Hopper Model, a principle that must be understood to comprehend “fitness”: “a hopper is loaded with as many different skills and drills imaginable…do not exclude anything: the more, the better… Here is the contention: he or she who performs best at these randomly assigned physical tasks is the fittest.”

In 2007, this was done in creating the second of three tests for the first-ever CrossFit Games:

The concept of “Unknown and Unknowable” became a fixture amongst the Games team, but also in the programming. It would never take on exactly the same structure as that original Hopper workout, but the implication has been there so many times since…

“This is the CrossFit Games”

One of the ways Castro would continue to include elements of surprise and intrigue is with this simple saying. Over the years he would periodically introduce workouts shortly before athletes started them. And in his classic and unique style, he’d conveniently leave something out, give the athletes and fans a chance to digest what he’d just explained, and then continue…

With the phrase, “this is the CrossFit Games” (or something comparable) he would then smile that famous Dave Castro smile and add something to the workout.

The nuance of providing the athletes with some, but not all of the information, is something competition directors and programmers have continued to implement at competitions of all kinds. Add it to the list of ways Castro has influenced not just programming, but the presentation of it in more recent years.

One of the most obvious differences between the Games and all competitions leading up to it is the ability to increase the scope of the test in terms of space. However, throughout the years Castro took this concept far beyond what most other programmers would have dared to try.

The first “off-site” workout is arguably the trail run on his ranch in the inaugural competition in 2007. The inclusion of this single modality, monostructural test as one of only three tests at the first Games signifies the importance of the ability to test athletes in environments they have little to no hope of preparing for ahead of time.

In particular, the evolution of these workouts are amongst the most noteworthy in the history of the Games:

A New Twist on an Old Movement

Make no mistake about it, Castro was very aware of this and undoubtedly spent countless hours studying where the Games had been to envision where it would go next; and though we cannot confirm it, in some cases it really feels like he had the later evolution in mind, but remained patient, programming it’s basic forms first (sometimes even many times) before ramping up the difficulty or complexity.

One and Done Implements

Almost in direct contrast to the concept of movement evolutions at the Games; Castro also has included implements periodically over the last 15 years which have shown up once, and then never been seen again. They are few and far between, but this is another wrinkle of the diabolical nature of his programming because once these things show up, athletes take note and will try to prepare for them…but sometimes all that preparation is for nothing as they never show up again.

A couple of important notes here:

It would be implausible, nay, irresponsible at best to dive into the programming exploits over the years and not give a nod to the yearly must-watch event that is the final event on Saturday evening of the Games. So much of the Games lore in the early days is tied to the “light of the tennis stadium,” during the era of the Games in Carson, California, but as part of Castro’s yearly research, he spends time walking the venue, envisioning the environment, and as a result has been able to carry the magic of the moment over to Madison.

The events have helped solidify some athlete’s legend in the minds of the community, while also serving as springboards for their initial stardom. Included with each event, we’ve also listed the individual winners of each because it doesn’t hurt to walk down memory lane.

It is no mistake that the list is chock full of certified legends of the sport, and in almost every instance, their performance helped catapult them to a strong finish, or announced their arrival to the community.

It also helps that in the grand scheme of the competition, there is always a sense of urgency that builds throughout the day, crescendoing in the evening as athletes make a final push on “moving day,” to try and position themselves favorably on the leaderboard for Sunday.

How Strength Is Tested Part Three

The final installment covering the impact of the various strength tests throughout the season is without a doubt the most important. Strength tests at the Games have consistently set the high water mark for performance, entertainment, and creativity. Some variations have presented themselves prior to the Games at non-sanctioned competition (spotlight lift), but their use at the Games took it to another level.

*Note: Slight variation, athletes got to pick designated starting weight before progressing through the set barbells in the ladder.

The ripple effect that occurs can be seen in the replication of formats, and scenarios at various in-season and off-season events that were first implemented at the Games. In many cases, we’ve seen formats used multiple times before being tweaked or left in the rear view altogether, but the impact is forever cemented by their inclusion at the top of the sport.

Finishing With A Bang

Programming the deciding event of the CrossFit Games is a difficult task, there’s no guarantee that in the era of dominant champions that the points spread and podium races will be such that the finale isn’t just a victory lap. But well before we saw multiple CrossFit Games titles in the hands of a select few, it was clear that Castro had visions for finales that – irrespective of points and races – could leave the competition on a high note and finish the weekend off with some fireworks.

Personal tastes on programming aside, it is significant that many of the lasting memories and pictures surrounding each finale don’t always include the winner. It’s also important to remember that sometimes giving the athletes the platform and opportunity to shine is a programming skill in and of itself. Given how many times we’ve seen a heat of athletes rally behind the last to finish, one could say it is quite on brand for the CrossFit Games.

Editor’s Note: We hope you enjoyed this three-part series on the programming legacy of Dave Castro. As the sport enters a new era, one that will undoubtedly be filled with the same inspiring performances that characterized the first 15 years, it was important to us to reflect on the foundational elements that helped solidify the sport’s current status. Good luck in the 2022 CrossFit Open!