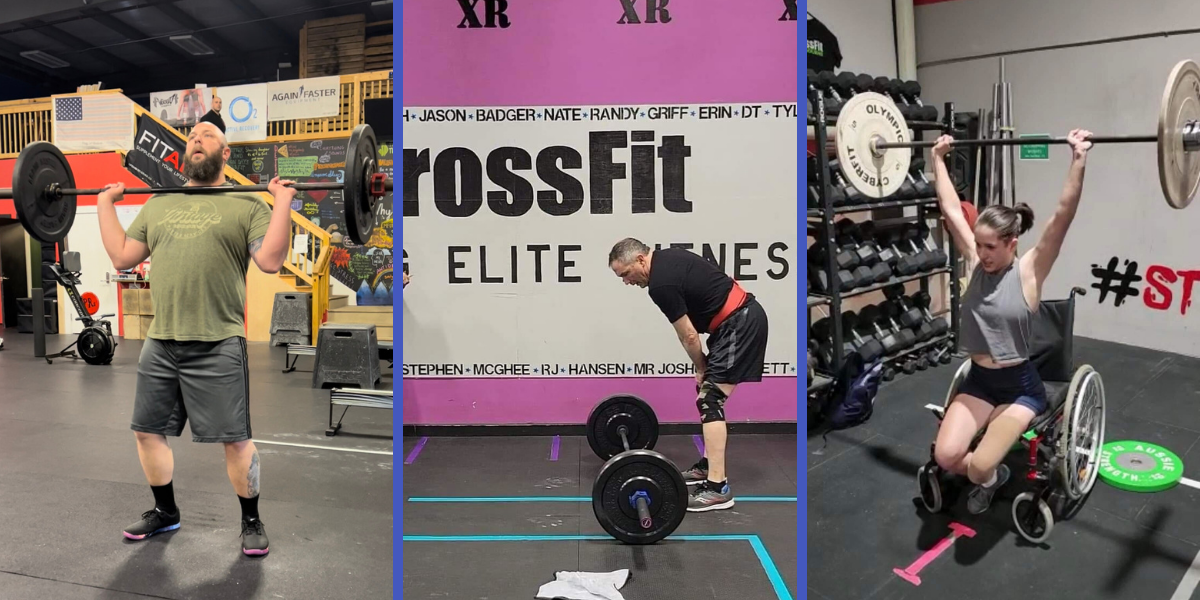 When we watched Justin Medeiros rip through 100 deadlifts and 100 burpees in less than eight minutes during the 22.2 live Open announcement, or we see 18-year-old Mal O’Brien post an inhumanly fast time of 4:11 in 22.3, it’s easy to feel a little bit humbled by the fitness we have worked so hard for.

It’s easy to forget about what the Open is all about: the coming together of tens of thousands of CrossFit enthusiasts from around the world to celebrate how CrossFit has changed our lives, and in some cases saved our lives.

It’s easy to forget that an 18 year-old who had her foot amputated five weeks ago, a 54-year-old who was three breaths away from dying from COVID last year, and a 39-year-old former meth user, were also throwing down, putting forth their best in 22.1, 22.2 and 22.3.

“CrossFit is about coming together and giving it your best go. If that means scaling every workout or adapting every movement, then do that.”

“Nothing too serious. I just figured I had slept weird and I was still able to walk normally so I didn’t think much of it,” said Cox, who started training at CrossFit New Beginning in Sydney, Australia when she was 15.

Later that day she started to feel a little bit sick and by midnight she noticed her foot was purple, cold, “and I had no sensation or movement,” she said.

Cox was rushed to the hospital where she found out she had an unexplained blood clot. Medical staff tried to save her foot for the next three weeks but weren’t able to, so on January 20, 2022, just one month before the recent Open, her foot was amputated.

Cox’s initial reaction was a mix of shock, fear, and anger at the world, “fuelled by the feeling of why me?’” she said.

Her self-pity, however, was short-lived.

“Having had three weeks to watch my foot gradually deteriorate, I knew I was better off without it,” she said of the relief she also started to feel. “I have struggled with accepting my circumstances and knowing not every part of my journey will be easy going. But…I have changed my perspective, aiming to look at what I have got and what I have been able to do instead of what’s stopping me.”

This perspective, and a desire to feel normal, led Cox to sign up for and compete in the 2022 Open in a wheelchair in the women’s seated with hip division, as she doesn’t even have a prosthetic foot yet, but she is hoping to move into the lower extremity division next year when she becomes comfortable with a prosthetic.

“I do the Open every year and I didn’t want this year to be any different. At a time when every aspect of my life was changing, CrossFit was one of the only things that stayed the same,” she said.

She added: “CrossFit has always been my safe place and nothing about that has changed. I know that at the end of any hard day, I can go workout alongside people who support me and push me to be a better version of myself. No one cares if you’re super strong, having an off day, or even if you have two legs.”

Cox’s message: “CrossFit is about coming together and giving it your best go. If that means scaling every workout or adapting every movement, then do that. At the end of the day, if you made it to the box and did a workout, you’ve achieved so much more than staying home and thinking about all the movements you couldn’t do.”

“I never had the confidence to do the Open before but after what I have been through in the past year I decided I could do it.”

On July 29, 2021, 54-year-old Rufus Brown tested positive for COVID-19. One week later, he collapsed at home and was rushed to the hospital.

“They started me on the experimental COVID medicines and everything was going OK,” said Brown, a member of CrossFit XR in Benson, NC.

But soon, things took a turn. His oxygen levels dropped and he was put on a ventilator.

“I told the doctor I was not going on the ventilator and she then instructed me that I was going to die,” he said. “I was really scared. It was like I was having an out-of-body experience or a nightmare that I couldn’t wake up from.”

Brown was on the ventilator for a week, but it didn’t work, he was told, “because I was in such good shape my body was trying to override the ventilator,” Brown explained.

This left the final option: an Ecmo machine, which pumps and oxygenates a patient’s blood outside the body, allowing the heart and lungs to rest.

“It was the only hope I had left,” said Brown, who had no pre-existing conditions.

He was on the Ecmo machine for a week and experienced a high fever, infections, and blood clots during this time. After that, “it took me another two weeks to wake up from all the medications and paralytics that they had been giving me for a month. I had been asleep for (more than) a month,” he said.

When he finally did wake up, “feelings of depression set in…I wanted so bad to be able to get up out of bed and go home,” he said.

It wasn’t until October that he was able to get out of bed for the first time since August 5.

“I could walk with a walker maybe 10 feet with oxygen and then I had to sit down. I had lost around 40 pounds, all muscle. All the hard work I had put in at CrossFit and working out my entire life was gone in about three months,” he said.

So began the long road back, and on January 1, 2022, Brown finally returned to the gym.

Less than two months later, though still about 60 percent back to where he was before COVID, Brown signed up for the Open with a new perspective on life.

“I never had the confidence to do the Open before but after what I have been through in the past year I decided I could do it,” he said.

Brown’s Message: CrossFit is about more than how fit you are. “My perspective about life has changed drastically. I wake up just glad to be alive…I used to be the guy that Rx’ed every WOD and wanted to have the best time or reps. (Now) I am just thankful to be able to (be there) and perform CrossFit and finish the WOD,” he said.

“The experience was so incredible. It was exciting and we had so much fun doing it…To have the community cheering you on and looking over and seeing my fiancé and stepdaughters cheering me on as well felt so good.”

Josh Colwell’s recovery journey started in 2018 with a knock on his door from the DEA, only to discover he had been charged with two counts of sales of crystal meth and was possibly facing prison time.

It was time to get clean.

“I honestly didn’t sign up when they first introduced (the program) because I had a lot of fear behind it,” said Colwell, now 39.

Then COVID hit, and although clean and sober, Colwell gained a bunch of weight and saw 299 pounds on the scale.

“So when they offered it again…I signed up,” he said.

That was October 2020, and Colwell’s body was still a mess.

“I had caused a lot of damage to my body from using crystal meth. There were times when I would fall over because my legs would just fall asleep because of the damage to my circulatory system…The heavier I got the more I would be in pain. There was a time when I was on the ground I would have to roll over to be able to get up or ask for help because I would be stuck on the ground. I have very little mobility,” he said.

The first day he showed up to EverProven CrossFit, Colwell admitted, was terrifying.

“I remember thinking I wasn’t going to be able to do this. I went home and the next few days I just cried…My legs hurt and my pride hurt,” he said.

Colwell went back anyway and decided to talk to the coaches about what he was going through, and he was met with nothing but support.

“They helped me scale everything…The members and coaches were so supportive. No one picked on me for my weight or my recovery status…The community never made me feel less than,” he said.

After that, he started attending classes just once or twice a week, and results came fast.

“I was losing weight. I was breathing better. I could get off the ground without assistance or rolling over,” he said. “When I first started CrossFit I couldn’t do a burpee. We just had a class a few weeks ago and we did them for seven minutes and I did almost 50,” said Colwell, who now goes to the gym four or five times a week.

As an added bonus, after being on federal pretrial for two-and-a-half years—a time he used to change “everything about my life”—Colwell was never given prison time.

“When I was sentenced for my crimes the judge said…in the 27 years of being a judge my actions in the two-and-a-half years on pretrial had spoken louder than any words he had ever heard anyone say in his courtroom,” Colwell said.

Most recently, Colwell completed his first CrossFit Open, something that was still too scary for him a year ago.

“The experience was so incredible. It was exciting and we had so much fun doing it…To have the community cheering you on and looking over and seeing my fiancé and stepdaughters cheering me on as well felt so good,” he said.

He added: “CrossFit has helped me in many aspects of my life. I am the strongest I have ever been naturally. It has helped my self-esteem. I feel good about myself and about the way I look…It has strengthened my relationship with my fiance…It has helped my recovery 1,000 fold.”

Colwell’s message: “If you are a person in recovery and you are looking for a positive community you will find one at your local CrossFit box.”