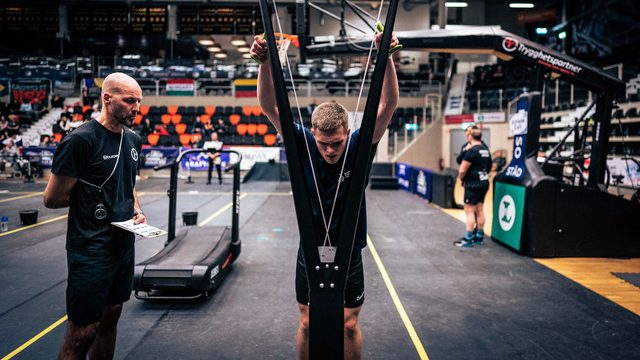 I recently read Patrick Clark’s Op-Ed in the Morning Chalk Up suggesting that judges need to take more accountability for their actions when judging athletes in online qualifiers. He is not wrong. Intrinsic integrity and accountability is a must to be a successful judge, referee, umpire, or adjudicator in any sport, but he is being far too lenient on the sports organizations in charge of running functional fitness events. Organizations in charge of leading our sport are, across the board, failing our judges and not putting them in a position to perform at their best.

I have long been a proponent of the view that the responsibility of ensuring fair and unbiased competition falls squarely on the shoulders of the sports governing body or sports organization in charge of the competition. This naturally begs the question, what should the expectation be on our sport’s leaders when it comes to adequately preparing judges for their role?

What should the expectation be on our sport’s leaders when it comes to adequately preparing judges for their role?

This question is both simple and difficult to answer at the same time. Simple, in that there are some very basic actions that could be taken to empower our judges, but difficult because our sport is suffering an identity crisis and doesn’t know what it wants to be, or maybe more accurately, isn’t willing to accept the reality of what it takes to get there.

Though I would love to debate the difficult question, that’s not what you came here to read about, so I’m going to punt on that question for the moment and select an answer to it so we can have some basic premises to work off of for the rest of this article.

For purposes of moving this article forward, I’m going to make the assumption that what our sport wants to be is a sport that (1) is seen as legitimate not just within our own community but by the global sporting community at large and (2) gives the athletes, coaches, officials, and administrators at the highest levels of the sport the opportunity to make a sustainable living doing their job in the sport.

With those premises in hand, let’s examine further the top three things our sports organizations need to be doing in the field of judging and officiating in order to move our sport towards that goal. Our judges need access to three basic things to be successful:

Let’s examine each in turn.

If We Want to Legitimize the Sport of Functional Fitness, Judges Need Access to These Three Things:

1. The Rules and Standards that Need to Be Enforced

Sports have rules. Period. In legitimate sport, the athletes understand the rules well in advance of the competition they are participating in. There are no questions as to the rules of a soccer game, a triathlon, a boxing match, a gymnastics meet, or any other globally accepted sport run by a national or international governing body the day before the event. The competition rules have been set well before the season and rule changes are announced months and sometimes years in advance.

At a minimum, functional fitness sports organizations should release a list of all eligible competition movements and the standards by which those movements will be judged for that season prior to the start of the season.

This serves several purposes. First, it allows athletes to practice their movements to the standard they will be judged by and eliminates athlete excuses for not doing or knowing the correct standard on competition day. Second, it allows judges to practice judging movements to the correct standard far in advance of any actual competitions. The expectation that judges can learn, memorize, recognize, and call out in real time movement standards mere hours after hearing them for the first time is ludicrous. Judging is a skill, and it takes practice.

Think about how often you perform a WOD in the Open only to improve your score on a second attempt days later. You didn’t magically improve your fitness; you learned through practice how to perform and pace better. The same applies for judges. Practicing judging to a certain standard leads to greater improvement, but this is only possible when standards are released early enough to have time to practice.

Luckily, the movement list described above already exists. Competitions under the auspices of the International Functional Fitness Federation (iF3) use a Movement Standards document which lists not only the standards for every eligible competition movement but also standardizes the language we use to refer to certain common positions, such as start and finishing positions.

You can view the document here. That document is updated annually before the next competition season begins in order to make any needed clarifications and add new movements.

For those thinking that our sport is “unknown and unknowable” and having advanced knowledge of movement standards subverts that, I refer back to the premises established in the beginning of this piece. We are assuming our sport wants to be seen as legitimate by the broader sporting community. Having clear and established rules laid out for an entire season (or quadrennium in many cases) is broadly accepted as a sporting requirement. In the iF3’s case, their goal is to get the sport recognized by the International Olympic Committee (IOC) and onto the Olympic Program, clear rules before a season begins is a baseline expectation.

Additionally, a book of movement standards only infringes upon a portion of the “unknowable” concept; it does not prevent the competition events from remaining “unknown.” With a 125 page movement standards document including everything from Air Squat to Press Handstand From Seated Straddle L-Sit, good luck correctly guessing which movements are going to come up at your next competition. However, whatever movement comes out of the hat, your judge will have known the correct standards and have been practicing judging to that standard for months. And if you, the athlete, is smart, you will have been practicing to that standard as well.

2. Opportunities to Practice Enforcing the Rules and Standards

Educational Opportunities For Judges Need to Be Improved

Now that judges know the appropriate standards in advance, they need to practice judging to those standards. Again, this responsibility cannot and should not be left solely to the judge. Better educational opportunities need to be available to our judges, and a clear pathway for improvement and advancement should be available. Education should involve rote learning including memorizing standards, ethical and behavioral codes of conduct, and hand signals.

What I have just described ignores completely the fact that almost across the board judges serve in a volunteer capacity. Can we expect judges to invest significant time and potentially money in education and the improvement of their skills if we do not address their volunteer status? Is it economically viable for competitions to pay all of their judging staff a decent wage? Functional Fitness competitions require a large number of judges compared to most sports.

These questions need to be considered if we accept the second premise that we established in the beginning of this article of creating sustainable employment within our sport for key stakeholders.  Unfortunately, in depth discussion of these questions is beyond the scope of this article. However, at the end of the day, judge education programs need to be developed and they need to be offered, because it is the right thing to do for the sport, and a necessary thing if we are to achieve the global recognition we seek.

If your coach never corrected your snatch technique, how would you know how to improve? Would you be satisfied if the only method for improvement available to you was googling “Snatch Technique,” watching videos online, and then going and videoing yourself while trying to self-correct? Now, self-evaluation and correction is a valid method of learning and can definitely speed up your learning process. However, it shouldn’t have to be the only way you improve your skills, whether snatching, judging, or really any skill you have a desire to learn.

In the same vein, judges should expect that the sport organization in charge will provide feedback and evaluation which will help them improve as judges. This can and should be done both casually during the course of competitions as areas for improvement are noticed in real time and through official post-competition performance evaluations. This is preferably done by designated evaluators whose sole purpose at the competition is to watch and evaluate judge performance, but it can also be done by Head Judges if needed.

There are many ways evaluations can be performed. My preferred method would be to use a numerical scale for evaluation (e.g. grading certain performance elements on a 1-5 scale). This allows evaluations to be aggregated and scores averaged to get an overall numerical ranking number for each judge. This allows judges to then be ranked against each other based on their averages, and competition owners could use those rankings to help select the judges most appropriate for their event. It would also provide an incentive for judges to improve with a goal of moving up the overall ranking chart and be selected for better events.

The iF3 TO Pathway will be utilizing numerically based practical evaluations, and while I personally would like to see a ranking system implemented in the future, it is not yet something that we are actively in the process of planning.

We Must Demand More From Our Sports Organizations

I didn’t write this article to refute Clark’s words, and again the role of individual integrity in judging cannot be understated. I wrote this article because sports organizations owe it to our volunteer judges to put those judges in a position of preparedness to perform their best, and we as a functional fitness community have to start expecting higher quality governance from our sports organizations if we want our sport to live up to its true potential.

More widespread awareness of the issues is a start, and things like Clark’s article or making YouTube videos highlighting judging inconsistencies certainly help with that, but those methods do little in terms of actually fixing the governance problems plaguing our sport. And I’m of the mindset that if I care enough to complain about the problem, then I also better care enough to try to fix it. So I leave you with this one thought to chew on, what does good sports governance entail, and who is responsible for it? The answer may not be what you think, but that is a question for another day.