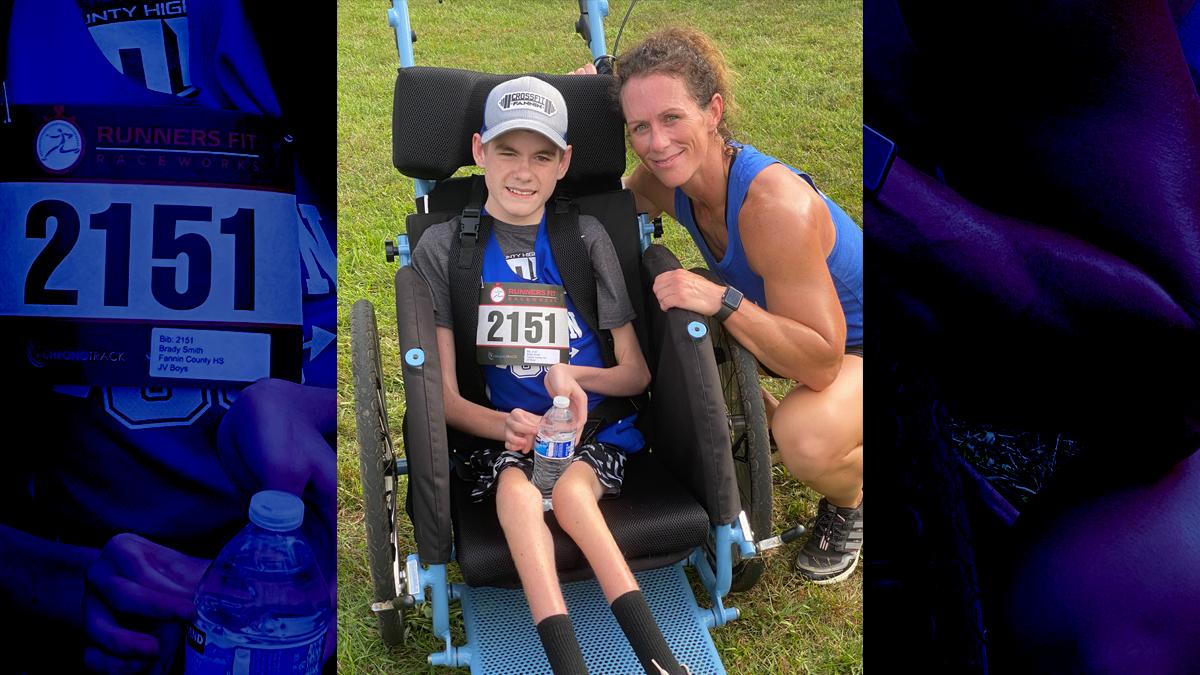 “I’ve had people contact me and say ‘I didn’t believe it. I didn’t know if you could do this.’ And well, we didn’t really ask,” Ashley Herendon said, when describing onlookers’ responses to seeing her push her son, Brady, in a buggy through track meets at school.

When the now Georgia affiliate owner (CrossFit Fannin) gave birth to her son 16 years ago, it was determined that Brady likely wouldn’t live after coming into the world with a neuromuscular condition — or, at minimum, have a very low quality of life. Through what she explains as a “indescribable peace”, Herendon knew God had her back through the tumultuous time, and “from that day toward I never looked back and didn’t worry about things,” she said.

When Brady was in 7th grade, he decided he wanted to run in cross country.

“I basically just didn’t ask the school, I just kind of told the school and I think that’s a better way to go about it. Like, a lot of people don’t know this is even possible. So we just did it! We told them we were going to do it, and the coach was really cool about it,” Herendon said.

Once the duo got to high school where the athletics rules and regulations are a little more strict, Herendon received some pushback on assisting her son with the races.

“I told the school, well, when someone comes to the gym, they just sign a waiver. So just allow us to find a waiver. We’ll agree to start in the back. We’re not going to get anybody’s way. We’re always going to get out of the way for the lead runners.”

As a former teacher for 16 years, she leveraged her knowledge and resources, contacted the Georgia High School Association, and eventually got the green light. Brady’s now in his second year of high school cross country, and can be seen crossing the finish line in a “really fancy buggy that comes from professional road races” as Herendon describes it, which was purchased via donations from the gym after word of Brady’s aspirations spread throughout the gym.

In September, the mom-son team completed their first half marathon, following a handful of 5Ks and a 10K they’ve done in the past. Herendon didn’t do any running-specific training for race day, and rather just kept her CrossFit regimen that she’s been crushing since 2009.

“Everyone I knew was like ‘oh, you need to train (for the half marathon)’, and I’m like, ‘I’m pretty sure we can do it’. I am very mentally stubborn, so once we did that — I can totally see why people like doing those longer things,” she said.

Brady may have to get another back surgery in January but pending that outcome, they’re planning to do another half marathon together in February. He also loves competing in the CrossFit Open and has “the best workout partners”.

Never one to take no for an answer, the Herendon family looks at the glass half full, to say the least. Carving their own lane to be included in school sports, achieving new athletic achievements, astounding doctors from day one and overcoming adversity are key components of their story — and so is remaining positive.

“A common misconception would be that when people see someone (like Brady), they feel almost like pity towards them. In reality. I was just thinking about this the other day; you see a wheelchair and it breaks your heart like ‘oh man’. But in reality, that wheelchair is such freedom for that person who needs it,” Herendon said. “It’s really such a blessing for the ability to have all this technology and all these things to make these things possible.”

Brady is grateful for his mom’s willingness to push him along, physically and emotionally, throughout these endeavors.

“I have a really good mom so it means a lot to me. She doesn’t have to do it but it’s our thing,” he said.
Their ‘thing’ is an inspiring feat that extends far beyond running. And Herendon says “Our hopes are that when he runs that someone will receive a blessing and realize that anything is possible when you set your mind to it!”