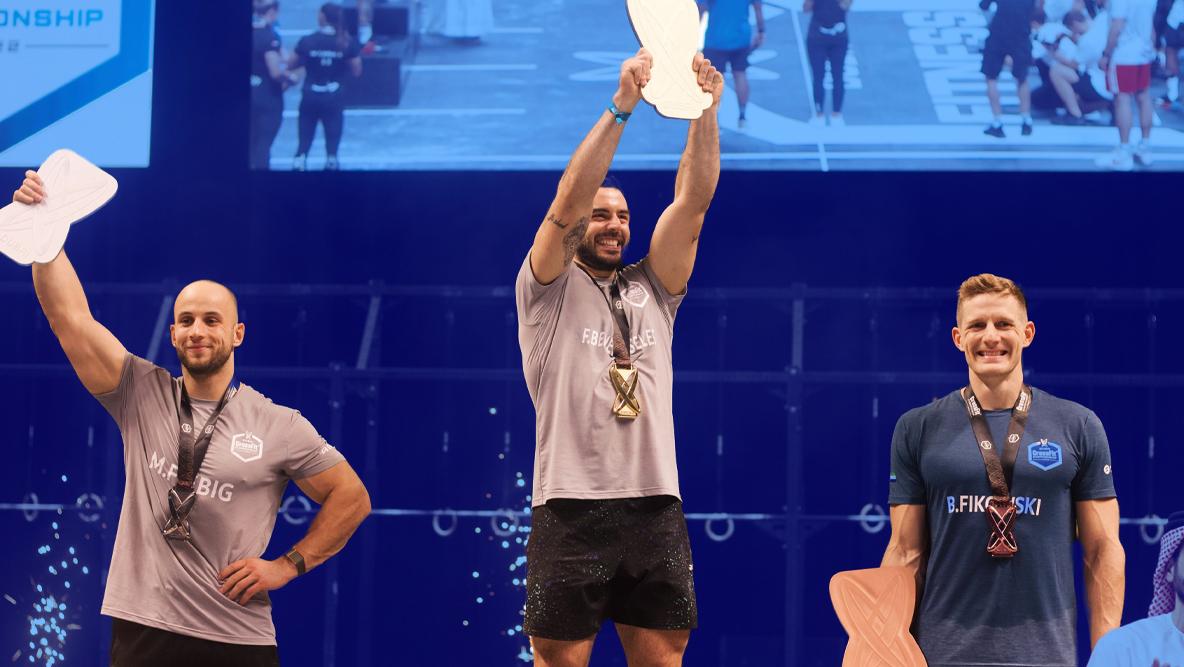 The final day of competition in the UAE at the Dubai Fitness Championship started with a jam-packed men’s leaderboard and some big unanswered questions on the women’s side, namely whether Karin Frey would be able to hold off 2019 CrossFit Games medalist Jamie Simmonds to take the title.

The details: The day kicked off with an interval-style event of shuttle runs, burpee box clears and dumbbell thrusters and was followed by a triplet of double-unders with a heavy rope, a sandbag carry and 50 chest-to-bar pull-ups.

The second to last event of the day—”Barbell Furious—was indeed a fast and furious one: 10 cleans, 10 front squats and 10 shoulder to overhead with a three-minute time cap.

On the women’s side, it was no surprise to see Frey, a strength athlete who won the max hang clean event, dominate. She finished the 30 repetitions at 70 kg (154 pounds) in 1:22, well ahead of the next competitor.

On the men’s side, it was, once again, Beneito who made a statement, cruising through his 30 reps and winning the second heat, however, he was unable to best Reggie Fasa’s time from Heat 1. But he did enough to find himself with the same number of points as the previous leader Fikowski with one event to go.

The task in the final event was a 90-foot handstand walk, 20 ring muscle-ups, 30 devils press and a 90 foot dumbbell overhead walking lunge, and the drama for the final podium spots didn’t disappoint.

On the women’s side, Frey was more or less a mathematical lock for the title, but five other women were fighting for the other two podium spots.

The men’s race was equally as exciting, with Fikoswki and Beneito tied in points, so it would come down to who bested who.

The excitement didn’t end there. After the numbers were crunched, Beneito ended with the same number of points as Fiebig—Beneito won the tiebreaker and took the title—and Fikowski’s misstep and seventh place finish caused him to drop to third.