It was the afternoon of Friday, December 14. Jimi Letchford, James Hobart and Adrian Bozman joined Dave Castro downstairs in CrossFit HQ’s box. Each one with a 45-pound backpack strapped on, they began stepping, up and down on a 20” box, repeatedly for 1,000 steps.

The workout is called Chad — it was named after Chad Wilkinson, a friend of Castro’s and a 22-year active duty SEAL stationed in Virginia Beach, who took his own life on October 29th.

“When I posted the workout, I wasn’t trying to rally people to do it,” Dave Castro said in a phone interview.

But in the week since, hundreds if not thousands of individuals began to take on the workout themselves, in teams, and affiliates across the globe.

“I was blown away by the number of people doing this. I’m really glad that so many people have done it and are rallying behind this. It’s all appreciated.”

Around 2008, Castro was a SEAL Qualification Training instructor down in Coronado when he met Wilkinson, who was already a SEAL and going through the course again after re-enlisting.

“We kinda treated him differently because he was already one of us,” Castro said.

The two developed a rapport and stayed in touch over the years especially as Wilkinson’s wife Sara became a L4 coach and flowmaster, who owned CrossFit Odyssey in Virginia Beach, where Chad was stationed.

When Sara spoke at her husband’s funeral, she recounted a recent story when she walked into the garage to find Wilkinson doing step-ups wearing a backpack. He was training to climb Aconcagua, the tallest mountain in South America, by doing 1000 step-ups at a time.

“You need to make that a Hero workout,” one of the CrossFit L1 seminar staff attendees whispered to Dave.

When Dave Castro spoke on the death of his friend he told us, “I’ve lost a lot of friends as SEALs. It happens. But this was a shock. Suicide, that’s a tough one. I don’t understand it.”

Castro, who admitted he wasn’t trying to raise suicide awareness with this workout, recognized the burden many service members carry around, especially those in the elite special forces community.

“So many people who’ve done this for a long time have seen things and done things that most normal people don’t,” Castro said. “These people are carrying around things we don’t understand.”

In the week since Castro first posted the workout, the outpouring of support hasn’t gone unnoticed.

“I was blown away by the number of people doing this,” Castro said, who’s been reposting videos and images to his Instagram story of anyone who tags him doing the workout. “I’m really glad that so many people have done it and are rallying behind this. It’s all appreciated.”

The support has been so widespread that its caught the attention of Wilkinson’s wife Sara and daughter Kinsley.

“Thanks to everyone who’s done the workout in my dad’s name,” Kinsley wrote on her Instagram story. 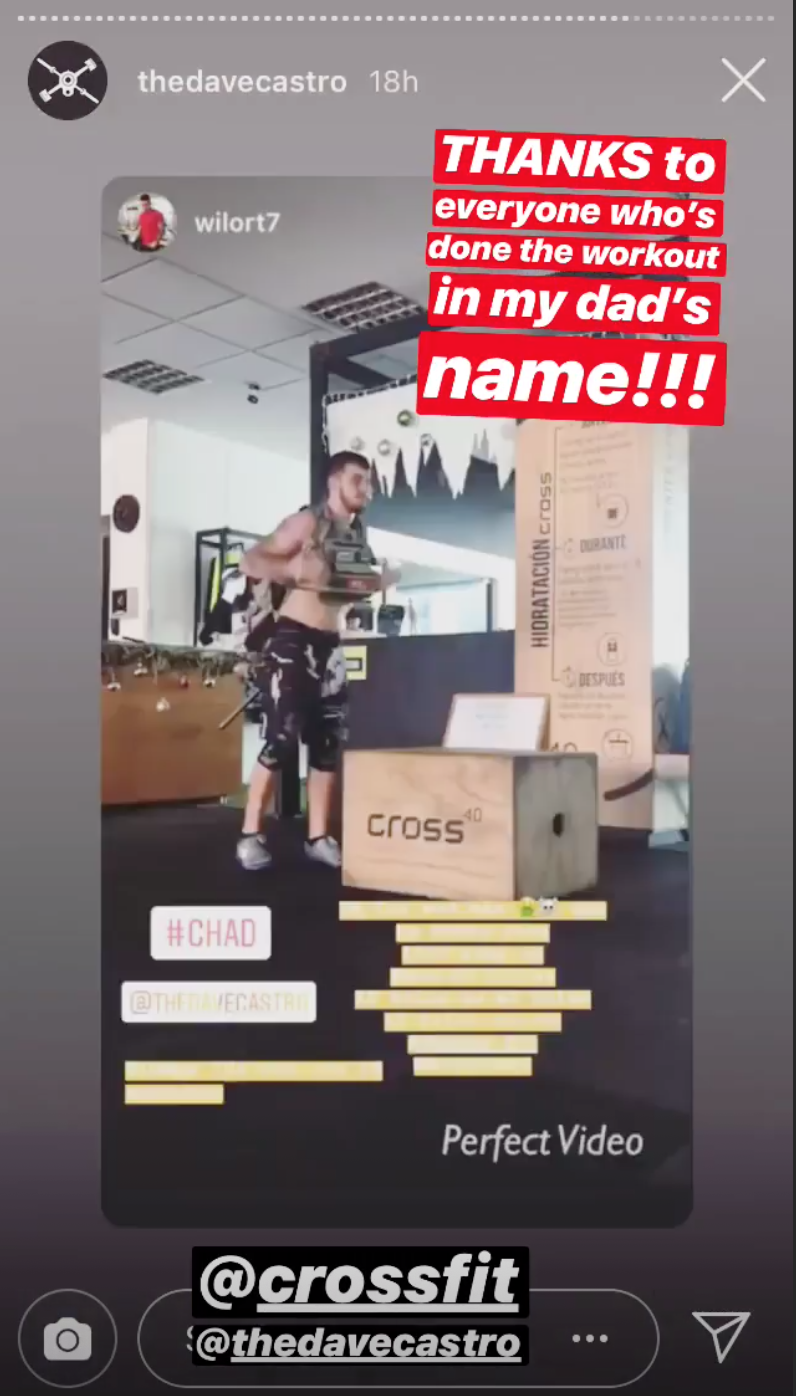 A thank you message posted by Kinsley Wilkinson on Instagram.

Whole boxes have programmed it as their WOD. Gyms everywhere have been posting their Chad times and thanking him for his service. Boxes all over the US and boxes in Brazil, Sweden, Portugal, Argentina, and Ecuador did what is now called “Chad.”

Affiliates even as far away as Portugal are taking time to honor Chad. A member of Margem Sul CrossFit in Portugal told us they had nearly 60 people show up to do it. “We did it because we care about the community and it’s the only way we can honor Chad for the things he did for the world’s freedom.”

And that’s the thing about CrossFit — across languages, borders, countries and generations, we’re a family that takes care of their own.

We’ve got the watch, Senior.

Apr 5 by Morning Chalk Up

May 19 by Meredith Root
CrossFit Games