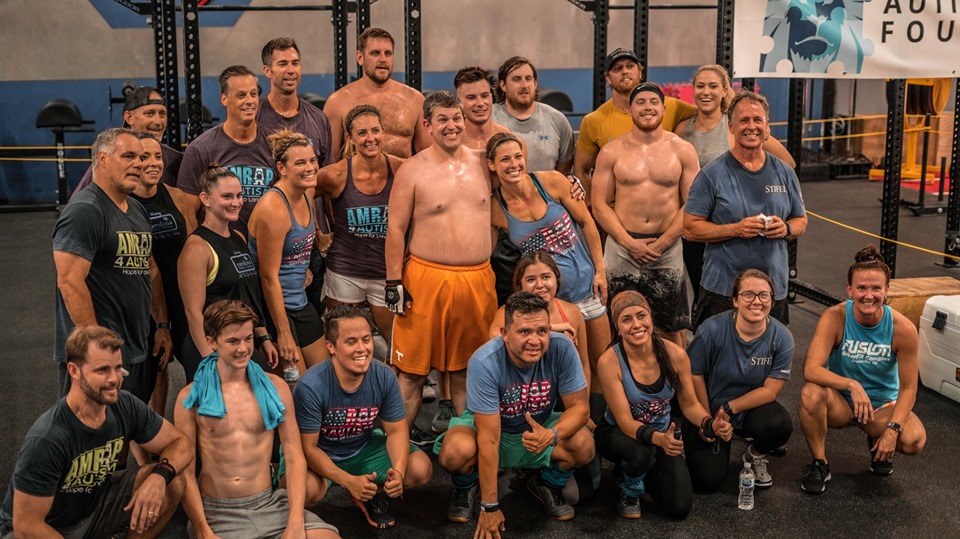 Two weeks ago, CrossFit Mayhem was packed with more than sixty teams of two, fighting their way to the top of the leaderboard in a workout that Rich Froning personally wrote, alongside Kristin Miller, with Tia Toomey and Shane Orr on the sidelines. But this was no ordinary class. This was the first Amrap 4 Autism in their newly launched global initiative, kicking off their expansion with none other than CrossFit Mayhem.

Amrap 4 Autism was founded in 2012 by Rudy Thoms, whose son Landon was diagnosed as severe non-verbal autism at 18 months old. He’s eleven now and Rudy’s inspiration. Thoms hosted a fundraiser at CrossFit S3 in Fort Mill, South Carolina and raised $8,000 to donate to Autism Speaks. The next year they doubled that and by the third year, Thom realized he was onto something. So they started Autism Strong, whose mission is to provide the strongest support, community and hope for those touched by autism through four core values: acceptance, encouragement, faith, and hope.

Thoms and Autism Strong continued to put on Amrap events, with the goal of reaching ten events in and around the Charlotte area. And then, they had an even bigger idea: go global.

“For me, the statistics speak for themselves. One out of every 59 children in the US has autism. These are our children and we must do everything we can to pave a way for a better future for them. That’s why we are going nationwide and soon global,” Thoms told Morning Chalk Up. “We designed Amrap 4 Autism so that the money raised in that community goes back directly into that community. So in Michigan, the funds went to Michigan… in Indiana, they went to Indiana, etc. this really helps members make a difference in their own community and is very unique for a national nonprofit.”

Thoms had his eyes set on a big goal to launch their nationwide expansion, CrossFit Mayhem in Cookeville, Tennessee.

“What a dream come true,” said Thoms about the support from Mayhem. “I never thought we would be launching nationwide with the most recognized, reputable, amazing and so incredibly supportive CrossFit gyms in the world.”

And Amrap 4 Autism was just as successful at Mayhem as it had been elsewhere.

“We sold out the event and started what I’m sure is the first of many A4A’s at Mayhem. Rich Froning personally wrote the workout, Kristin Miller participated, Tia Toomey and Shane Orr stayed around and supported us. It was something I know we will never forget,” said Thoms.

But it was not something that Mayhem will ever forget either.

Josh Malone, Director of Events at Mayhem CrossFit, was pleased with how the event was pulled off, saying “Amrap 4 Autism is an amazing organization with a solid staff … The organization is important to us. At their core, they are using their platform to help uplift others and to provide for those in need. These are some of the core principles that we have at Mayhem, so it’s a no-brainer that we would want to assist in spreading their message. Rudy and Sean are some awesome guys with great vision.”

Thoms and Autism Strong hope to continue their reach, working with boxes everywhere to raise funds and awareness for autism.

“Our vision is that the next 5 years will allow us to grow organically and reach every state in the US and branch out globally. Since the event at Mayhem we have had over 20 CrossFit gyms interested in hosting and are planning those events now,” said Thoms.