The Stress Of Supporting A Spouse From The Sideline 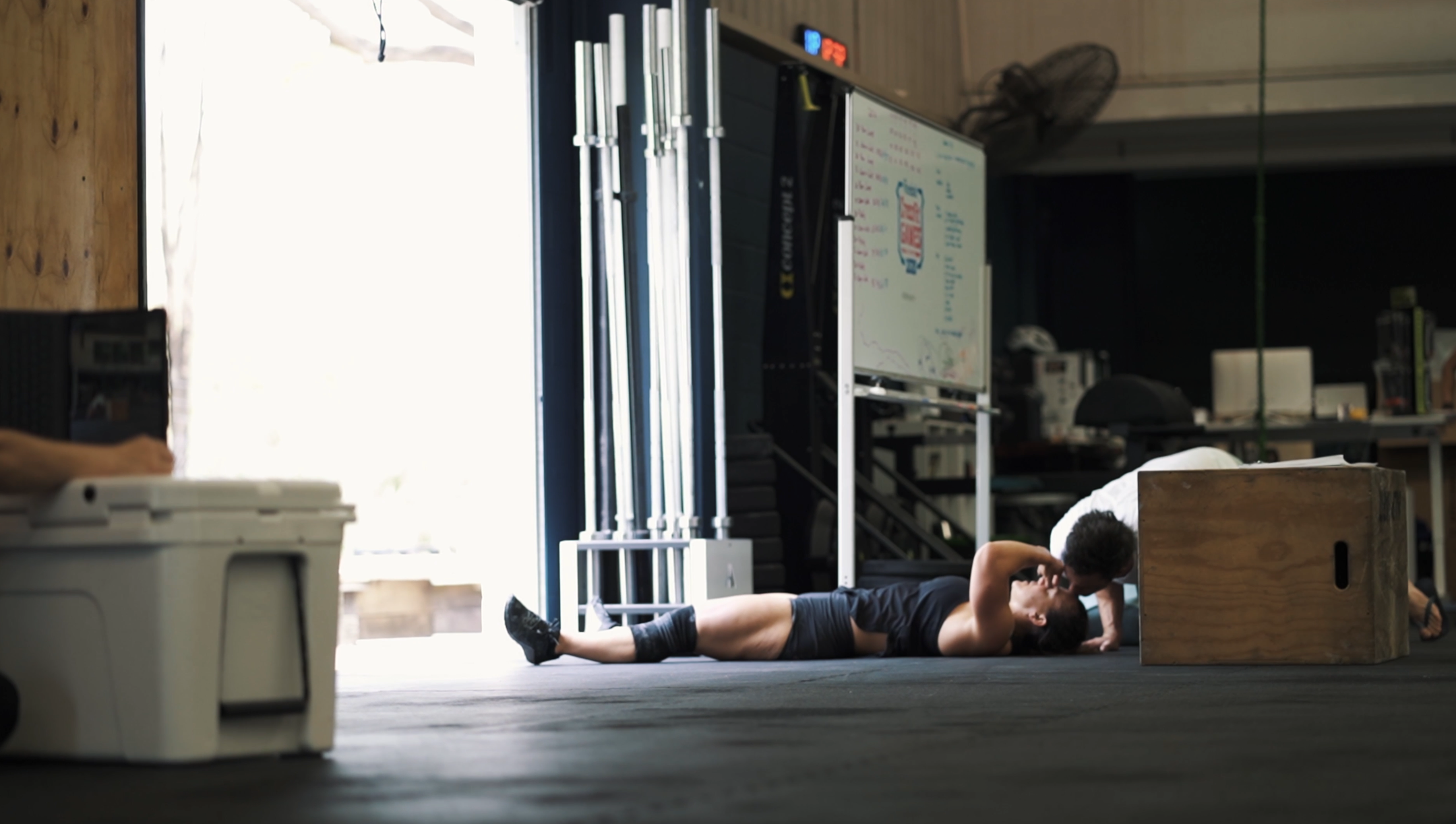 If you thought you suffered workout anxiety during the 2020 CrossFit Open, imagine the stress of watching your beloved chase down some of the top scores on the worldwide leaderboard.

Matt Saunders is a decent affiliate-level CrossFitter in his own right, but this year his top priority was riding the emotional rollercoaster, watching wife Kara Saunders edge into the Top 20 worldwide.

“The first week started off pretty chilled, because we didn’t really expect much going into it and you know, week one came out and I saw her score and I was like ‘Ah! This is going to be good,” he told the Morning Chalk Up.

“From then as each week’s gone … I guess it’s the same just more and more stress that’s kind of built up.”

Balancing act: The couple has been documenting the 5-week journey on Kara’s VLOG – where Matt plays supporting roles of coach, judge and Father for their daughter Scotti while juggling work as a full-time firefighter. He’s no stranger to supporting Kara from the sidelines, both throughout the season and at the Games.

“Stress, that’s pretty much the main thing. Cause you have no control over how she does or what she’s doing and you really want her to do a good job, it’s just full-time stress pretty much,” he said.

Kelli Heppner, Jacob Heppner’s wife couldn’t agree more: “Anyone that says otherwise is either crazy or lying! I feel like each year (The Open) becomes more competitive and pressure is increased. Sometimes I have to remind myself to take a minute, slow down, and enjoy the process. Because it can become as stressful as you make it!”

She added: “CrossFit spouses sacrifice a lot, but I think just knowing that this season of life has a timestamp helps. Relationships are also give and take.”

Same stress, different scenario: Weightlifter Jessica Lucero is on her own qualification path for the Tokyo Olympics in 2020, but can sympathize: “The Open is the most stressful time of the year, 100 percent,” she said.

Husband Christian Lucero is right on the cusp of qualifying for the 2020 CrossFit Games, currently just below the ‘blue line’ sitting in 31st place.

Jessica said: “I’m his cheerleader, videographer, physical therapist and assistant through the Open. Plus a student, a dog mom, a full-time athlete myself it’s a lot.”

Juggling judging: Matt Saunders added: “Trying to be a judge for someone at that level is pretty stressful as well, so you really take your hat off to anyone who’s doing it at the Games.”

Emm Butz, Sean Sweeney’s fiancé showed us the aftermath of a role reversal, allowing athlete to play judge. Let’s just say the CrossFitting Cowboy should stick to the Sport of Fitness.

Emm told the Morning Chalk Up: “Stress of not messing up reps and set up on open workouts while judging Sean is honestly terrifying, Sean is so nervous before each workout he can’t even think.”

“Sean may do superhero things in the workout world but in normal life, I still have to find the ketchup in the fridge for him that’s right in front of his face,” she laughed.

The hardest part for Emm though is watching things outside her control go down on the competition floor.

“Seeing Sean so down and not being able to say or do anything to help is so hard. The mental toughness he has just purely to keep grinding at this sport, again and again, is so inspiring to watch.”

Team effort: Joann Fregien also competed in the Open alongside her fiancé, reigning 2nd Fittest Man on Earth Noah Oslen and admitted she secretly checked leaderboard more than he did.

“Noah does the best he can on each work out, sometimes will do a redo if he thinks he can do a little better after seeing some of the posted scores and then we sit back and hope for the best because the rest is out of our control,” Joann said.

“It can be a little stressful but we do our best to not let following the leaderboard become too consuming,” she told the Morning Chalk Up.

Joann said the whole season has always been a team effort: “If he has to be at a competition early in the morning, I am up and ready to go help get breakfast figured out, and make sure he’s on time just like he gets me breakfast in the morning if I have to wake up early to study before an exam.”

Family Affair: Many athletes credit their family and support crew as the secret to their success.

Among them, Travis Mayer boasts being a husband and father of three before his credentials of owning CrossFit Passion and five times Games athlete on his Instagram profile.

In posting photos of wife Lauren and his three sons watching his 20.5 performance he wrote: “They are my “WHY” and what push me everyday.”

Travis has also qualified for the 2020 CrossFit Games through the Top 20.