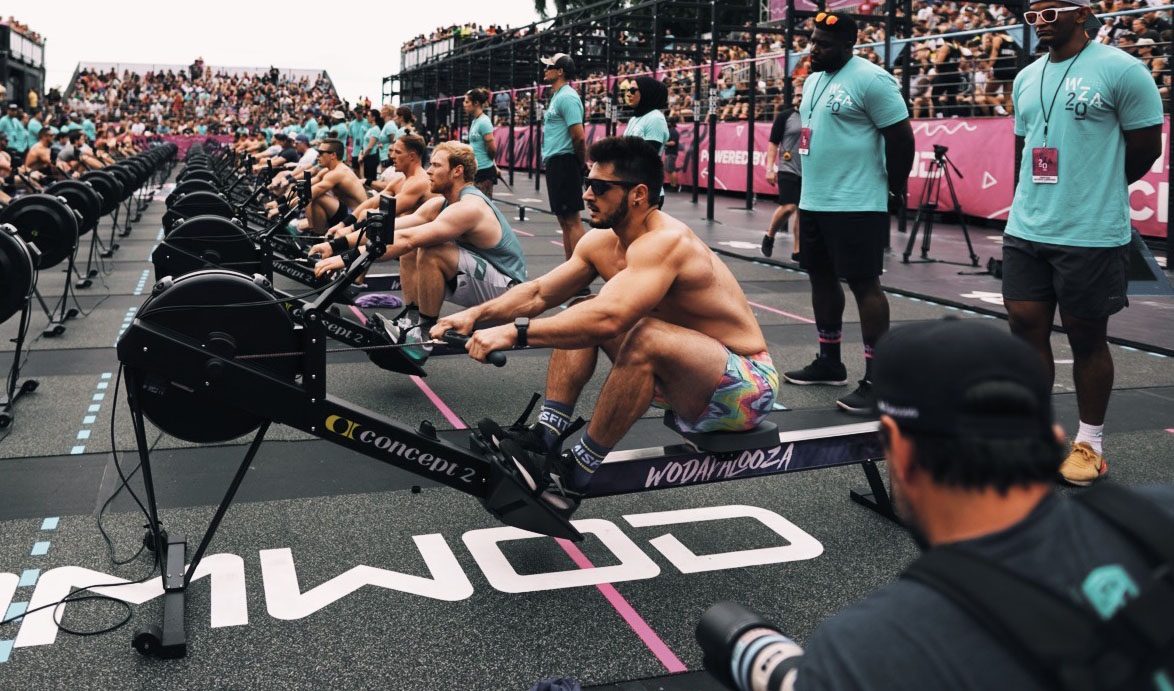 The narrative from day one carried over to day two of the Wodapalooza CrossFit Festival on Friday in Bayfront Park, Miami. Travis Williams continued to make his presence and level of fitness felt in the men’s division, the women’s division’s much-promised battle between Tia-Clair Toomey and Sara Sigmundsdottir continues into day three and CrossFit Mayhem Freedom remains the team to beat despite many challengers to the throne.

Williams keeps on showing that despite his commitment to compete with CrossFit OC3 at the 2020 CrossFit Games, he is still a force to be reckoned with in individual competition. In the first event of the day, called “Pace Race”, he came up just 28 meters short of an event win finishing with 3,600 meters rowed. His second-straight runner-up finish gave him a 32-point lead over Cole Sager.

In event four, the “Pump Sesh Triplet”, Williams struggled under the lights of the Bayside Stage as he failed to finish the workout under the 8:00 minute time cap, finishing 12th. Sager made up 28 points with his fourth-place finish and sits just four points behind Williams.

Sigmundsdottir remains atop the leaderboard in the women’s division but she knows she’s in for a fight to keep it. Toomey is just four points behind her as both women have put on a show for the South Florida crowd.

The 2020 CrossFit Open champion, Sigmundsdottir, placed sixth in the “Pace Race” in a close contest for the event win. The difference between Katelin Van Zyl’s winning distance of 3,285 meters and Sigmundsdottir’s was 42 meters. Toomey placed 11th in the event, the worst finish she has ever had in a Sanctional.

That gave Sigmundsdottir an 18-point lead heading into event four.

Showing the drive and determination that has garnered her three-straight Games titles, Toomey stormed back and finished second in the “Pump Sesh Triplet” while Sigmundsdottir placed fifth.

Mayhem Freedom may hold the lead after day two, but they have a few highly competitive teams nipping at their heels. Two “Super Teams” are pushing the four-time Games champions. Team GOWOD is just two points behind Freedom with Team Wit in third, eight points off the lead.

Team GOWOD and Wit traded places in events three and four. In the “Pace Race”, teams were split into male and female pairs and given separate scores for each. Michael Smith and Joshua Al-Chamaa won the men’s pairing for Team Wit with Luke Schafer and Streat Hoerner placing second for GOWOD. The men’s Mayhem Freedom pair of Rich Froning and Scott Panchik struggled, finishing 13th.

The women then got a chance to tackle the rower in event four. Andrea Nisler and Taylor Williamson gave GOWOD their second event win of the competition. Samantha Briggs and Harriet Roberts were runners-up for Team Wit, and the team of Chyna Cho and Tasia Percevecz placed third for Mayhem Freedom.

Both GOWOD and Wit held the overall lead heading into event five, the team “Pump Sesh Triplet”. It was all Mayhem Freedom from the outset as they were the only team to finish under the time cap.

On tap for day three: Two events are scheduled for both individuals and teams.

Update: An earlier version of this story incorrectly identified Katelin Van Zyl as currently leading for the qualifying spot over the rest of the field. She already has received her Games invitation and the spot at the time of writing was Emily Rolfe. The story has been updated to correct this.

Update: In an earlier version of this story stated Albert-Dominic Larouche was looking for his first Games invite. It has been updated to correctly state that he is looking for his 6th invite.