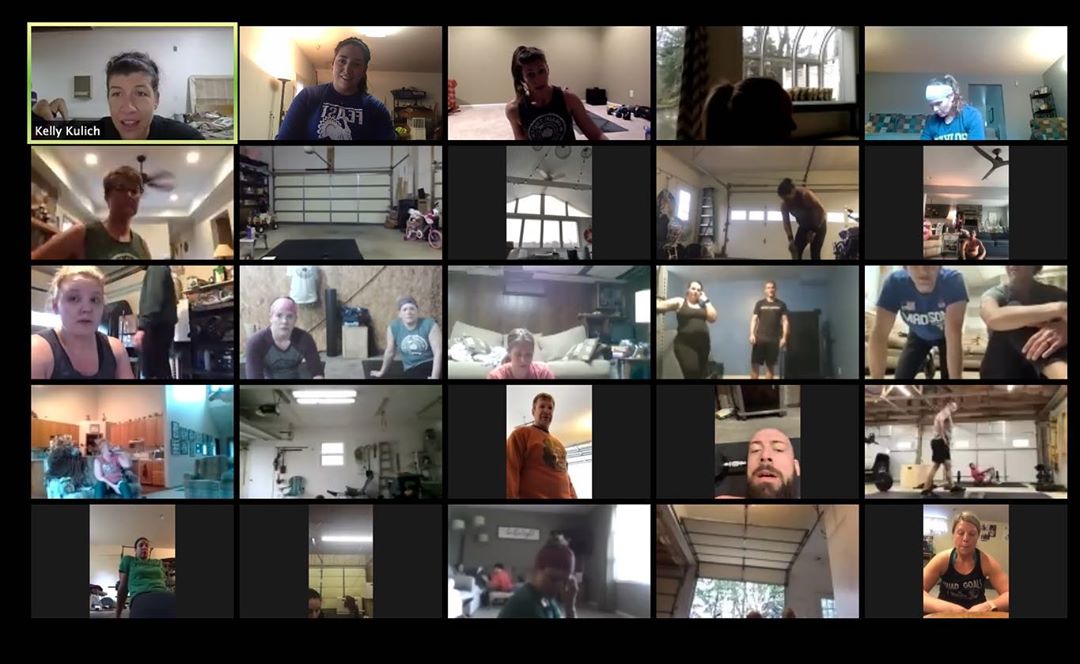 A little over a month ago, thousands of CrossFit affiliate owners around the world simultaneously embraced a new way of servicing their clients: The Zoom class.

Considering President Donald Trump’s announcement on Tuesday that small gyms will be part of Phase 1 of the re-opening of the American economy—“if they adhere to strict physical distancing”—Zoom classes might become a non-issue for some soon. Though hopeful, it’s still unclear exactly when and which states will proceed to re-open their doors.

However, in countries like Canada, Prime Minister Justin Trudeau has repeatedly said Canadians shouldn’t expect businesses to re-open for several weeks.  And in France, President Emmanuel Macron has extended the lockdown until May 11.

So, it’s clear that for many affiliates around the world, the Zoom class trend will likely continue into May and beyond.

What affiliate owners say about Zoom so far: The majority of affiliates owners we spoke with agreed that the Zoom class, while a useful tool, isn’t enough to keep clients interested for very long.

Just one piece of the puzzle: Steven Bowser, the owner of Broward CrossFit in Davie, FL. has lost just 10 percent of his members since closing his doors, and admitted his Zoom classes have been slow.

More successful for Browser has been splitting his members up between himself and his coaches and providing customized, individual programming to each client via the TruCoach app. He hasn’t stopped offering Zoom classes, but says Zoom classes on their own “just weren’t cutting it.”

Multiple membership options: Kelly Kulich, the owner of Fort Miami CrossFit in Saint Joseph, MI closed her doors on March 15 and quickly discovered many of her members wanted more than the Zoom class.

So she started offering personal training plans and has since expanded this to offer different membership tiers depending on the client’s needs and financial situation. The first tier of membership gives clients access to programming, the Zoom classes and equipment the gym lent to them, while the second and third tiers include all of the above plus an individual training program designed specifically for their unique needs.

This has helped Kulich retain her clients, she said.

All about the personal touch: Element CrossFit Owner Alex Cibiri has had huge success in Mississauga, Ontario with Zoom classes, which he said have continued to grow in attendance each of the past five weeks. He has lost just eight percent of his membership base due to holds and cancelations and has picked up two new clients.

However, Cibiri thinks the only reason he has been able to do this is because of the personal touch each of his members are currently receiving from a coach. When they closed their doors, he split up his clients, each of whom was given a personal coach who provides them additional individual help each week.

All hope is not lost for the Zoom class: Though 75 percent of the affiliate owners we spoke with agreed Zoom classes alone aren’t enough for most people, a handful of owners also said Zoom classes have been the highlight for their community.

In fact, some members of 7 Mile Strength and Fitness in Grand Cayman, Cayman Islands have even requested Zoom classes continue even when the gym re-opens, said owner Carl Brenton.

Brenton put out a survey to clients, and half of them said they “would like to do a combination of in-gym and Zoom,” citing convenience as their main reason.

In Seattle: Affiliate owner Alyssa Royse also said her Zoom classes have become more and more crowded, so she has had to add new time slots.

May 31 by Emily Beers
More #Coronavirus

May 23 by Mark Agnew
Your Coffee is ready.