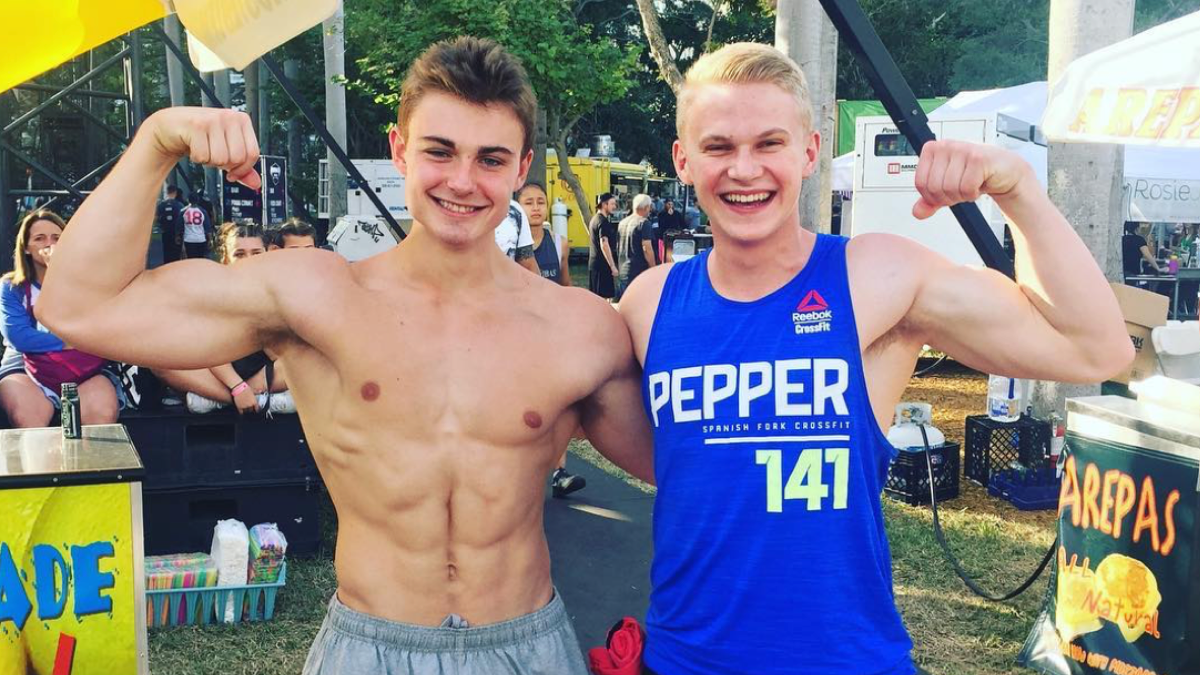 Every CrossFit season introduces us to new up-and-coming stars. A young athlete who comes out of nowhere to make their mark in the sport and get people discussing if and when they will be contending for a podium spot and ultimately the title of the “Fittest” at the CrossFit Games.

We asked our team of expert Games analysts in Tommy Marquez, Patrick Clark and Brian Friend who they predict will be the next breakout star for the 2021 Games season.

What we are looking for: Last year Tommy hit on his first two athletes in his “Young Guns” piece, with Justin Medeiros finishing on the podium at 21-years old and Gabriela Migala finishing 18th in her 2020 Games appearance. They were preceded by the likes of Haley Adams, Laura Horváth, Brooke Wells, Saxon Panchik, Jonne Koski, Samuel Kwant, Cody Anderson, Björgvin Karl Guðmundsson and even Tia-Clair Toomey who was 21 years old when she made her debut at the 2015 Games.

Criteria: We kept the criteria pretty simple in that the athlete must be 23 years old or younger and have no previous individual Games experience. We asked our analysts to pick one man and one woman and why they think that athlete is a name to keep an eye on for the upcoming season.

Dallin Pepper is the most decorated athlete in teenage division history having won three consecutive titles in 2017, 2018, and 2019. His first foray into the adult division in 2020 was cut short due to the COVID pandemic, and his 628th place finish in the 2020 Open is wildly misleading.

The Open last year took place during the fall, and Pepper was in the midst of his senior season of football for Spanish Forks High School. Instead of prioritizing the Open, he chose to do the workouts at odd hours and circumstances to honor his commitment to his football team. Pepper was set to make his live competition debut at the Atlas Games last March but the event was notoriously shut down the day before it kicked off due to the pandemic shutdowns.

The transition from former teenage champions into the men’s division has been much less smooth than it has been on the women’s side. One of the major obstacles has been the developmental gap in terms of top end strength between 18 and 19 year-old athletes and their fully grown competitors.

That shouldn’t be an issue for Pepper, who recently snatched 300 pounds, push-jerked 315 for a set of 6, and hit a 355 pound split jerk for a double. The physical tools are there, and evidenced by the raw capacity shown during his three title runs at the Games he’s no stranger to competing on a big stage. Expect to see him at the semifinals stage, putting up some eye-popping numbers while joining the likes of Jonne Koski and Ben Smith who first came onto the individual radar at 19 years-old as well.

I see a lot of similarities between the paths of 2020 sensation Justin Medeiros and Anikha Greer up to this point. Medeiros missed out multiple times to compete at the Games in the teenage division before breaking through in a big way as an adult.

Greer technically has not stepped foot onto the competition floor at the CrossFit Games despite finishing 2nd last year due to the season being cut short and the results from the Age Group Online Qualifier (AGOQ) being taken as the final results for the year.

Greer has experienced similar close calls to Medeiros, missing the Games by one point in 2018, and five spots in 2019 while injured before having her long-awaited Games spot ripped away by the pandemic. Still her performance in the AGOQ and ability to take adversity on the chin and come back stronger speaks volumes to her work ethic and determination.

The 16-17 teenage girls did the exact same workouts in the AGOQ as the 35-39 division, and Greer’s scores would have placed her 2nd overall, ahead of individual Games athletes like Anna Tobias, Becca Voigt Miller, Jessica Core, and Kelley Jackson in the most competitive adult masters division out there.

She’s arguably the strongest athlete in the newly graduating teenage class, boasting a 250 pound clean and 325 pound back squat before her 18th birthday. With the setup of the new season she should be able to make a solid run at a semifinal spot in one of the four North American events with plenty of time in the future to finally earn a physical spot on the Games floor that has eluded her.

Back in November I wrote a piece on how success in the boy’s teen division at the Games has yet to translate into individual success. Greashaber could change that this year after an impressive 2020 season that was cut short due to the COVID-19 pandemic.

At the 2017 Games, Greashaber placed third in the 16-17 year old division. After aging out of the division he competed at the 2018 Central Regionals on a team and placed 948th in the Open. The 2019 season saw him jump to 47th in the Open before his impressive 2020 finish.

Greashaber was poised to make the Games last season through the back-fill process had the season continued. His impressive Open showing was highlighted by a fourth place finish in 20.5. His plan last year was to compete in as many Sanctionals as possible to prepare himself for a potential Games berth. He competed at the Mayhem Classic where he placed 20th in a field that featured five 2020 Games athletes and various Games veterans. He was set to compete at the Atlas Games next and was in Montreal when the Sanctional was cancelled the day of the competition due to the pandemic.

Greashaber’s strengths lie in his gymnastics and his mental fortitude in tough workouts. Standing at 6’0 and weighing 200 pounds he has gotten stronger every year under the tutelage of Brute Strength’s Matt Torres. Expect another jump in his Open performance this year and for him to compete for one of the 20 Games qualifying spots from the North America Semifinals.

Australia is a hotbed for up-and-comers and Turner looks to be the latest to follow in the footsteps of fellow Aussies Toomey, Kara Saunders, Madeline Sturt and Jessica Coughlan. Her 2020 Open performance didn’t reflect how talented Turner truly is as she finished 485th worldwide and 26th in Australia but she has made impressive jumps in her fitness and ranking since her first Open in 2018, where she finished 18,431st.

She stood out at the 2020 Australian CrossFit Championship where she placed sixth in a stacked field that included Saunders, Mia Hesketh and Sturt. Competing in her first large-scale competition, she recorded six top-five finishes including an event win. She was contending for the event’s automatic Games invite up until the final day.

Turner, who turned 23 this week, showed an impressive capacity in traditional CrossFit workouts and grunt work workouts at the Sanctional. However, she struggled in events that featured gymnastics movements, but soon after the Sanctional she sought out Michele Letendre to shore up those weaknesses. With a year of Letendre’s tutelage and Deka Comp programming since that impressive debut, don’t be surprised to see Turner’s name on the leaderboard fighting for one of the three Games invites at the Oceania Semifinal.

At only 21 years old, and with only two years of Open competition under her belt, this may not be a name you are too familiar with. Let me tell you why you should be.

She has no Regional experience, no Games experience, and her only Sanctional experience came at Wodapalooza in 2020 where she won the Rx division. I probably wouldn’t have noticed this either, except that she was on the roster for the Atlas Games and in preparation for that competition I realized that if Michalyshen had been in the Elite division at Wodapalooza earlier in the season she actually would have done extremely well.

There were six events at Wodapalooza which were exactly the same in the Elite and Rx divisions; she would have placed 3rd, 5th, 7th, 8th, 9th, and 13th on those events. That relative score would have been good enough to earn her a top ten finish in one of the deepest fields of the season and she would have placed high enough to take the qualifying spot for the 2020 CrossFit Games instead of Emily Rolfe.

There are few 22 year old athletes with the diversity of experience Holgersson has.

Moving into the elite field as an 18 year old he competed on team CF XY. They placed 3rd in the Meridian division, and finished 28th at the Games in 2017. There are other notable athletes such as Jamie Simmonds and Patrick Vellner who racked up some Games experience on a team before having successful individual careers.

Holgersson has made three appearances at Sanctionals over the past two years. In the first season he placed 15th in Iceland. In the second Sanctional season he showed up to Strength in Depth and had a very impressive 7th place finish, then followed that up with a 5th place finish in Norway.

Holgersson had his best ever Open finish in 2020 placing 94th worldwide which was good enough for 2nd place in Iceland (behind only Bjorgvin Karl Gudmundsson), and while it’s unlikely he’ll out perform BKG, I expect him to do even better in the Open this year, and be in contention for both a Semifinal spot, and ultimately a Games spot coming out of Europe later in the season.