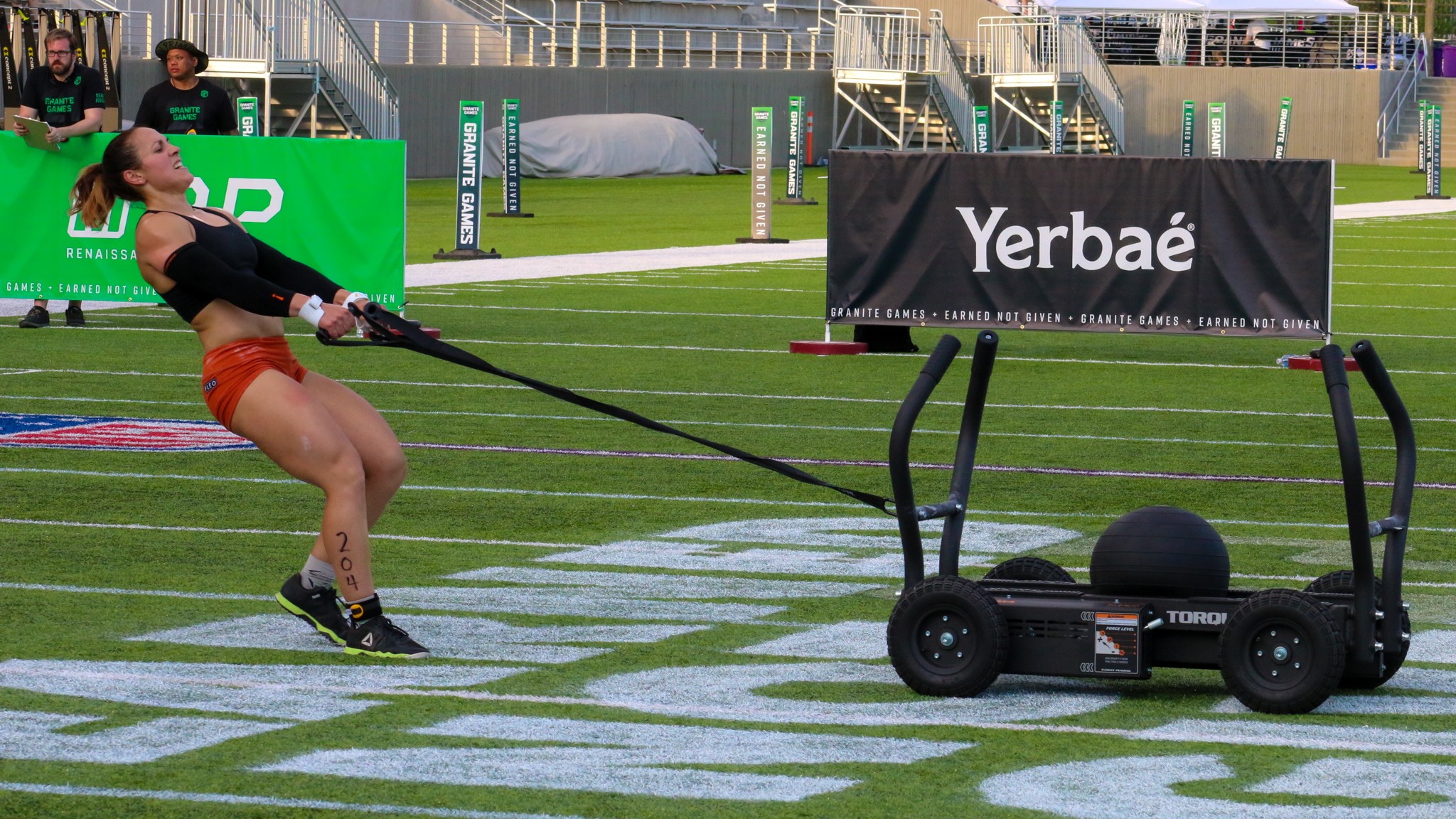 The CrossFit Semifinals tested athletes with a variety of movements, both new and old, as they attempted to lock up spots in the 2021 NOBULL CrossFit Games.

One of the additions was the Torque TANK, a sled on wheels that provides increasing resistance the harder the athlete pushes. This new device took center stage during several events, including a remix of the iconic Push-Pull event from the 2014 CrossFit Games.

Remind me: The TANK M4 made its CrossFit debut at the Mid-Atlantic CrossFit Challenge. The unique sled on wheels provided three resistance levels and tested the athletes in an entirely different manner than the traditional sleds. The implement also played a role at the Granite Games and West Coast Classic and showed that the difference in competition surface does not provide advantages to certain athletes.

There have been several sled events in past CrossFit competitions, especially in the 2014 and 2019 Games. These events seemingly showed that certain athletes could perform better than others based on leverage or the dampness of the artificial turf. However, Torque Fitness created the TANK in an attempt to level the playing field.

Following the Sprint Couplet event at the 2019 CrossFit Games, discussions took place that focused on how top-tier athletes performed poorly. Mat Fraser, Patrick Vellner, and Brent Fikowski all placed outside the top 20 while Cole Sager, Noah Ohlsen, Matt Mcleod, and Will Moorad all placed inside the top six.

The common factor in these outcomes is that the athletes that performed the best were in the same lanes, albeit in different heats. The same appeared to be true for those that performed poorly. Whether certain lanes were faster remains unknown, but the critical comments have continued in the years since this event. Now, however, the Torque TANK removes the appearance of outside advantages.

First-hand comparisons: There are several athletes in the 2021 CrossFit Games field that have previous experience working with sled events at various competitions. Noah Ohlsen, the second-place finisher in 2019, took on the Push-Pull event in 2014 and faced off with Josh Bridges, Rich Froning, and Ben Stoneberg among others. He then tested out the 2021 version that featured the TANK instead of a traditional sled.

The athletes had to adjust their strategy on the fly during Semifinals. Several walked up to the Torque TANK and tried to shove it with considerable force, but they ran into a virtual wall. Many had to step back and reapproach the implement. When they pushed steadily, the TANK began to move across the competition floor. Some athletes learned this approach early in the event while others took more time. Ultimately, all of the competitors figured out that the TANK responds differently than a traditional sled.

Prepare for every test: The CrossFit competitors had several different reactions to the Torque TANK and how it impacted certain events. Some pointed out the level of resistance while others explained how the resistance settings can force athletes to adjust their strategies. Scott Panchik, on the other hand, looked at the new implement in a very different way. He actually compared it to a real-world experience that he had prior to Semifinals.

The real-world experience, as well as considerable preparation throughout the year, benefited Panchik. He took third in Need for Speed 2, which prominently featured the Torque TANK, and locked up 92 points in the process. This event helped propel him to a second-place finish in Semifinals and punch his ticket to the CrossFit Games once again. Ohlsen and Pichelli also used their experience during their respective competitions and locked up their own trips to Madison.

Bottom line: The Torque TANK only appeared at the in-person competitions in the United States, becoming available to only a limited number of athletes. Those that experienced the new implement expressed the opinion that it provided a more balanced test than the sleds from years past. There is no clear answer as to whether the TANK will appear at the CrossFIt Games in Madison, but it would provide Dave Castro with a new tool to test the athletes in front of a massive crowd.