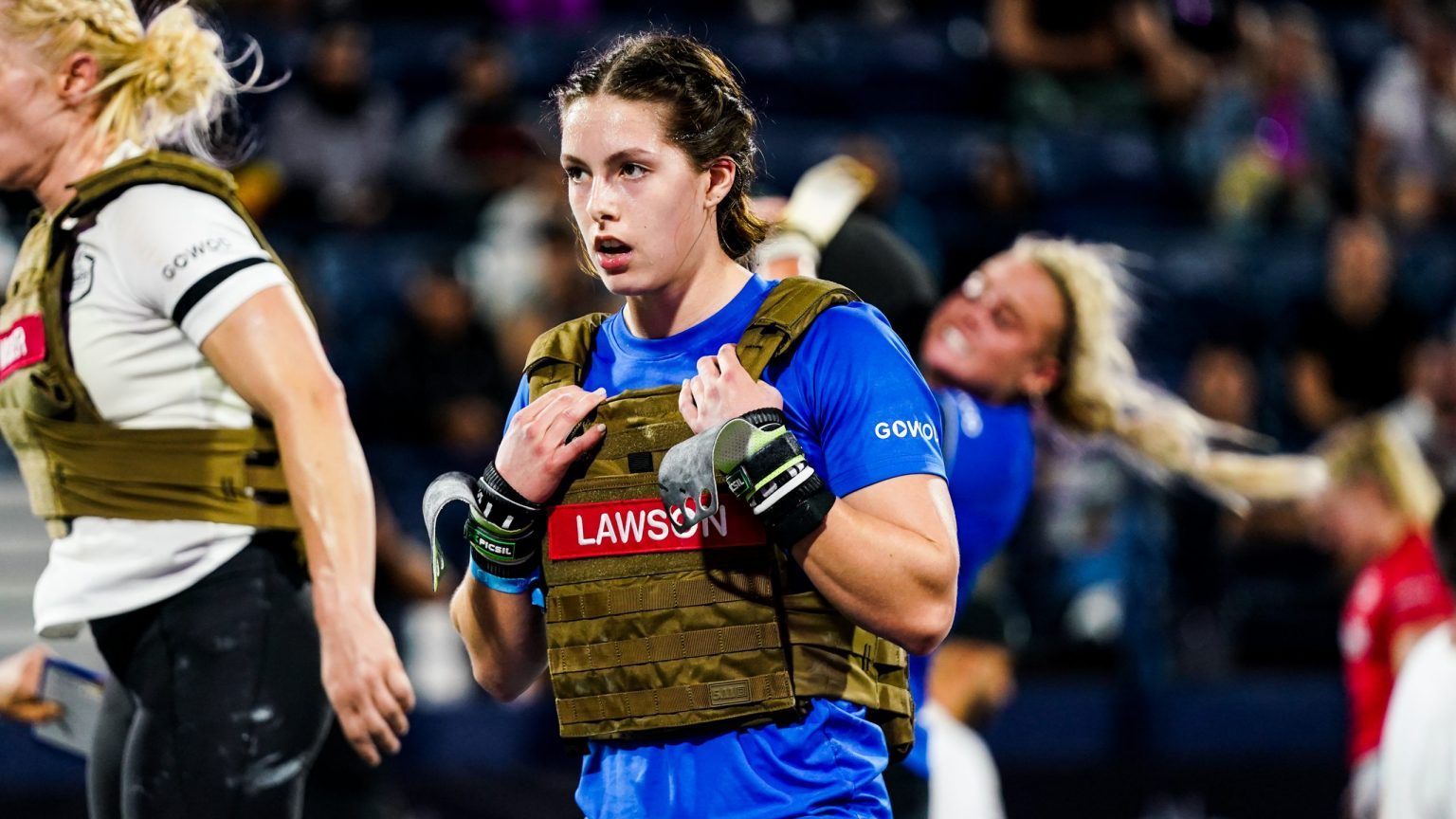 It was moving day on Day 2 of the Dubai CrossFit Championship as athletes got to take on some traditional CrossFit workouts inside the Dubai Duty Free Tennis Stadium. Three workouts awaited the athletes and at the end of the day there were two new names atop the leaderboard with favorites Laura Horvath and Roman Khrennikov your new leaders. Here are three takeaways from the opening day of competition.

The veterans continued to dominate during Day 2 but the youngest competitor of the field showed she belonged. Emma Lawson showed resilience and patience way beyond her 16 years.

After a rough Day 1 of competition, she bounced back with three top-10 performances. The Canadian was using this competition as a test to determine if she would concentrate her efforts on defending her “Fittest 16-17-Year-Old” title at the Games or attempt to qualify for the Games as an individual.

After Friday she might be closer to going all-in with a Games individual path much like her teen counterpart Emma Cary did last season. She opened the competition with ninth place in the “Lift-off” with a lift of 102.5 KG (225 LBs) and easily had more in the tank had it not been limited to just two lifts.

In the next event she recorded her best finish of the competition, placing seventh in the grueling chipper workout with a time of 24:27.

She completed the evening in eighth place.

The final day of workouts play into Lawson’s strengths as she performs well in classic CrossFit workouts, especially couplets which are on the schedule. Currently in 12th place overall, just four points out of 10th. Don’t be surprised if she finishes in the top-10 and contends for a top-8 finish.

A More Complete and Competitive Adler

This past Games season can probably be considered a disappointment for Jeffrey Adler. After placing fifth at the 2020 Games, the Canadian finished 13th at the 2021 Games. Instead of taking time off to rest, Adler and his coach and fiancee Caroline Lambray went to work on his perceived weaknesses and that was his engine and improving his work capacity on machines.

That hard work during the offseason and attention to those holes in his fitness was hinted upon at the Rogue Invitational a few months ago. In Dubai it appears those holes are completely gone as evidenced from his performance in the running events in Day 1 and how he attacked and performed in the workouts on Day 2.

Two of those workouts typically would have been ones where he struggled in, the chipper in Event 3 and the Concept 2 bike in Event 4. He placed third in Event 3 with a time of 20:54, just 10 seconds behind Roman Khrennikov. He followed that with a fourth place in Event 3.

His strength has not suffered due to all the additional work on his engine as he placed third in the “Lift-off” with a lift of 165 KG (363 LBs).

Overall he sits in second behind Khrennikov.

Nisler More Than a Team Athlete

If you have heard of Andrea Nisler it’s probably because of her exploits as a team athlete. She has been one of the top female team athletes over the last five years including winning an Affiliate Cup with Rich Froning’s Mayhem Freedom team this past Games. However the last two years her name is always among the top-20 in the Worldwide Open showing she has the ability to compete and do well as an individual athlete.

During the 2020 season, she showed she is actually a top-10 athlete as she competed in the online stage of the Games and placed 10th. She has competed as an individual in some events most notably the 2021 version of The Fittest Experience where she won the competition. This competition is her first time competing in one of this notoriety and scale.

Three top-10 finishes on Day 2 reaffirmed that if she wanted she could do well as an individual athlete if she wanted to. She placed second in Event 4 behind Laura Horvath. Her average placing was 4.6 on Day 2 moving her from outside the top-10 to fifth place overall.

For those wondering, she is returning to defend the Mayhem Freedom team title in the 2022 season which is a welcome sight for the women’s individual division.