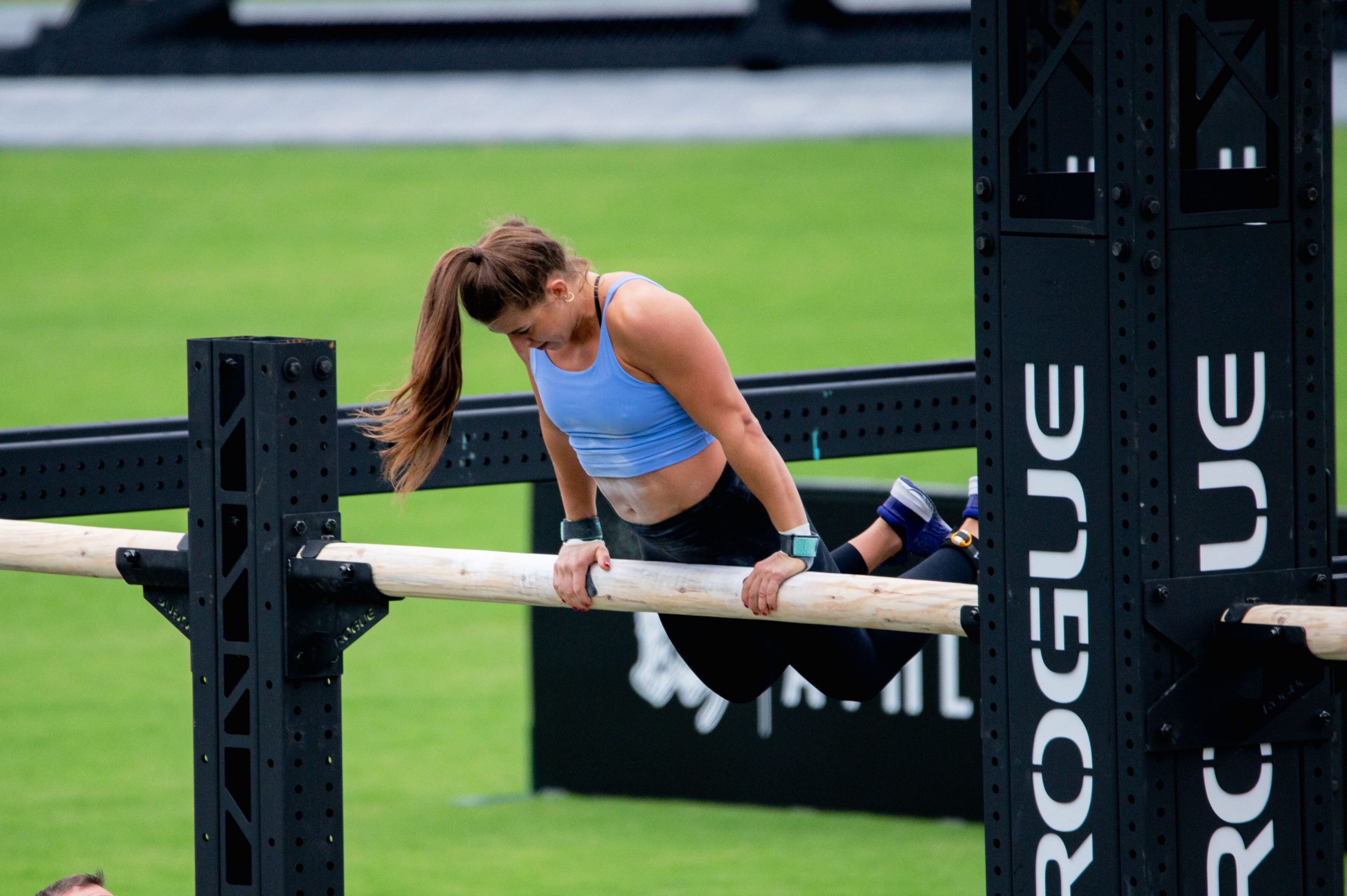 The first official day of the 2022 Rogue Invitational took place on Friday with three action-packed events at the Dell Diamond in Austin, TX. There were several competitors who put on a show, but in the end consistency won out, with Justin Medeiros and Gabriela Migala finishing the day as the leaders heading into Saturday.

Event 2: Ski Bar: The day started with an up-and-back chipper with three movements, but with a twist. The athletes had to use a four-inch log bar for their 20 muscle-ups before heading to the SkiErg for calories (40/32). Ski Bar continued with 80 GHD sit-ups, more calories on the SkiErg (40/32), and 20 more log bar muscle-ups.

The Men: Noah Ohlsen jumped out to a big lead in Heat 1, but Chandler Smith chased him down on the second set of SkiErg calories. The two men were neck-and-neck on the final set of muscle-ups, but Smith took the heat win at 11:04.54 as Ohlsen finished second (11:32.14) after some no-reps. Cole Sager finished third with a time of 11:35.26.

The Women: The four-inch thick bar proved even more detrimental to the women, as not a single woman was able to finish the event before the time cap.

Event 3: Back Attack: Event 3 on Friday was a vicious combination of back squats (405/275 pounds) and box jump overs (24/20 inches). The athletes had to complete five back squats and then 25 box jump overs. They continued to decrease one back squat rep and five box jump over reps until they reached one and five, respectively.

The Men: Nick Mathew turned in a blistering pace during Heat 1. He was a full round ahead of his fellow competitors, and he turned in the time to beat at 4:15.40. Ohlsen finished second behind Mathew at 5:20.15. Smith finished third at 5:28.27.

The Women: Known for her strength, Australia’s Ellie Turner all but dominated Heat 1, somehow making the 275-pound back squats look easier with each round. She finished in 4:33.74.

The Men: CrossFit Games veteran Jonne Koski was the story of Heat 1. He set out with a fast, consistent pace, something that he has done during multiple CrossFit Games workouts, and he did not let up throughout the event. He snagged his first heat win of the weekend with a time of 8:04.49.

The Women: The final event of the day looked eerily familiar to Event 4, with Turner jumping out to an early lead in Heat 1, and hanging on for a heat win in a time of  8:54.27, just ahead of Annie Thorisdottir.

Looking ahead: Heading into Saturday, Medeiros leads the men’s side with 350 points. Khrennikov is close behind with 335 points, while BKG sits squarely in third place with 300 points.

On the women’s side, it’s a jam packed leaderboard heading into Saturday, with Gabriela Migala, who was consistent but never better than fourth on Friday, leading the pack, but she’s only 10 points ahead of Horvath in second, and 15 points ahead of Lawson. With Saturday being Moving Day, it’s still very much anyone’s game.