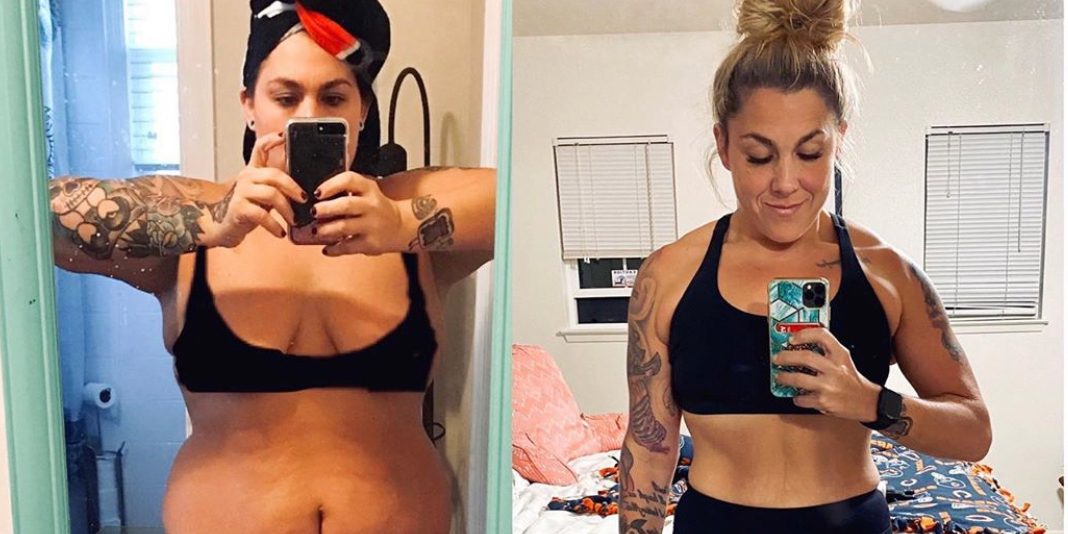 Credit: Sally Salazar
Enjoying Morning Chalk Up? Help to ensure that we can continue to be an independent voice for the community and sport we love by supporting our journalism today.
Support Our Journalism

When her gym closed in March due to the COVID-19 pandemic, Sally Salazar had a decision to make.

“Workout a lot or get fat,” said the 33-year-old Salazar, who has been training at CrossFit 808 in Oahu since she moved to Hawaii with her husband and son one year ago.

Salazar passed the test: Since being locked down at home, she has been working out every day, has stuck to her dialed in diet, and has managed to shed the last few pounds she needed to hit  her 100-pound weight loss goal. At five-foot-four, Salazar just weighed in at 155 pounds, down a full 100 pounds from her starting point of 255 pounds three years ago.

The cruise that launched her CrossFit journey: Three years ago, while living in South Carolina, Salazar and her family went on a cruise.

Salazar returned from the cruise and signed up for Gold’s gym, but soon found herself frustrated, as she wasn’t sure what to do at the gym, and she had nobody to hold her accountable, she explained.

The post that changed her life: Salazar had heard about CrossFit and sensed it might be what she needed. So she took to social media asking for recommendations for a CrossFit gym.

On her second day at CrossFit Soda City in Columbia, SC, Salazar attended the 6 a.m. class and brought her son. Push-ups were on the agenda.

Another reality check: For the first eight months of CrossFit, Salazar went to the gym but didn’t change her diet.

Then in December 2017, Salazar reached out to CrossFit Soda City’s nutritionist Karen Embler for help.

In just three months of working with Embler, Salazar was down another 30 pounds, and by the end of 2018, she had lost a total of 90 pounds since she saw that fateful picture of herself on the cruise.

More exciting than the number on the scale: Today, Salazar has no problem with push-ups, and she got her first pull-up this past year. She can back squat 235 pounds, deadlift 265 pounds and is able to kick up to a handstand for the first time in her life.

Heading into lockdown in March, Salazar said she wasn’t all that concerned with the number on the scale. She was more concerned about ensuring she stuck with her training routine and healthy way of eating, as she knew it would be easy to fall off the wagon.

Through Zoom classes with the CrossFit 808 community, running on her own, working out with her 9-year-old son who is part of their CrossFit Kids program, and cooking healthy meals, Salazar managed to drop another five pounds and is stoked to say she has officially lost 100 pounds.

Her message to others: “I remember for so many years wishing I had started the year before, and I know it sounds cliche, but if you don’t start now you’re going to wish you started now in one year from now,” she said.