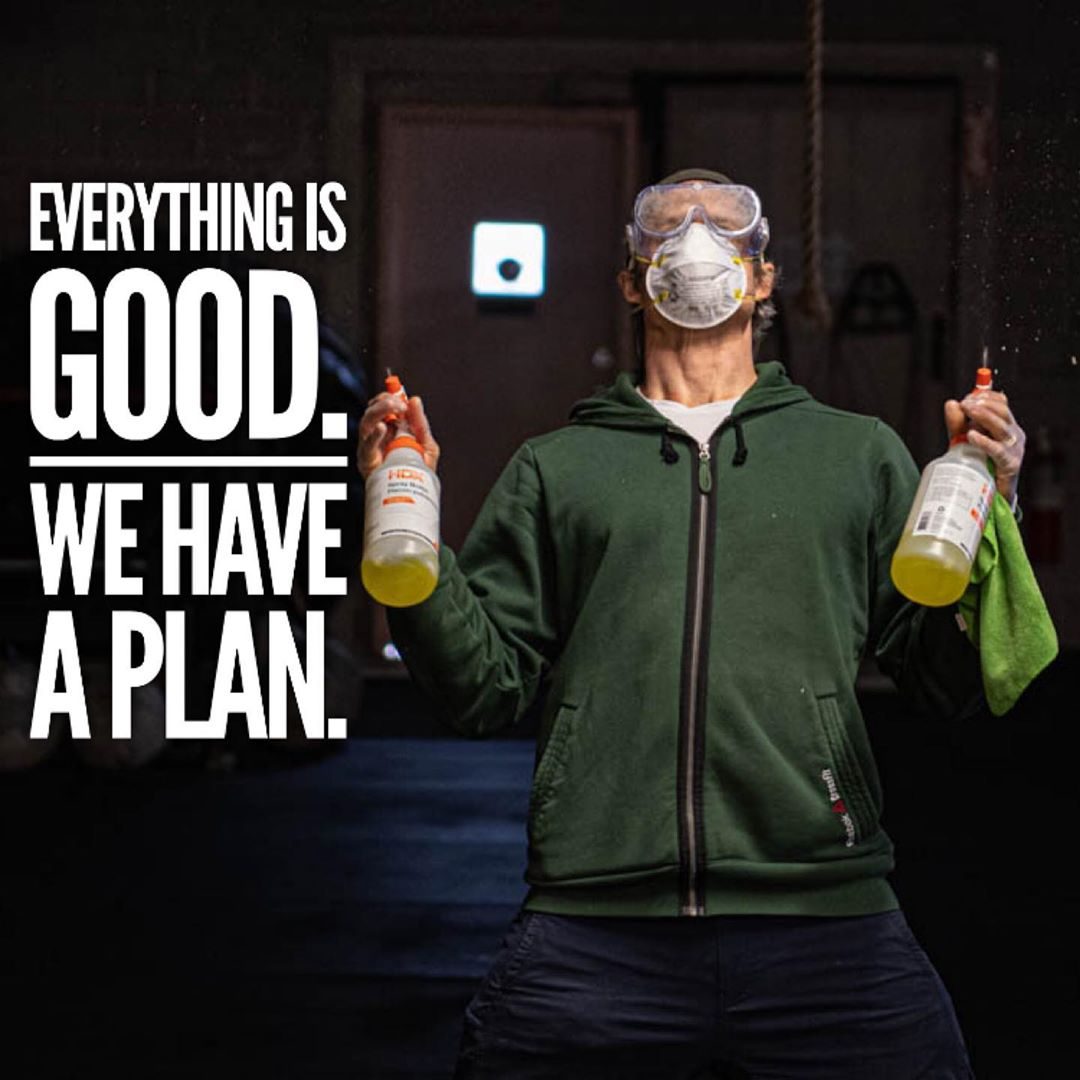 Nobody is 100 percent sure what it will look like when CrossFit affiliates around the world are able to re-open in earnest.

Some CrossFit affiliates in the state of Georgia began the process last week but quickly learned that the landscape could shift quickly as the governor announced a prohibition on group classes. Gyms in other states, such as Oklahoma and Utah, will be allowed to experiment with their new way of conducting business as of May 1.

Meanwhile, other gym owners are expecting to have to wait until at least mid-May and are anticipating having to follow strict restrictions. In Colorado, for example, gyms are allowed to open in May if they function as a personal training studio and limit the number of the people in the gym to just four.

On goes the thinking cap: This has led to some serious brainstorming, as affiliate owners try to figure out exactly how to run their gyms safely, meet government demands and still offer a viable service to their members.

The most common interpretations of what this might entail include:

Thinking Outside the Box

While the above seem to be the most popular ideas circling amongst affiliate owners, a handful of others are thinking way beyond just small tweaks to the status quo.

Complete overhaul: Will Hurst, the owner of Spark CrossFit in Phoenix, AZ is rethinking the bedrock of the CrossFit community: the group class model.

Abandoning group classes solves the short-term social distance requirement, and it’s also what might be best for the long-term, as there have always been shortcomings with the group class even before COVID-19, Hurst explained.

Though getting rid of the group class might seem daunting to many gym owners, Hurst believes now, more than ever, is the time to innovate and experiment.

Instead of running group classes, Hurst is moving his gym to a more open-gym style model; however, this doesn’t mean clients will come in and do their own thing. Clients will show up on their own time, check in with a coach, and then move through the training session of the day — a warm-up, a workout and cool down — at their own pace, all the while continuing to receive personalized coaching throughout their session. Hurst explained what this will look like in practice in greater detail in a video he put out via his company BigLittleGyms, a consulting and coaching support provider for gym owners.

Though he has a plan in place, Hurst added this is not the “be all, end all,” and his model will likely evolve in time. But this willingness to be open-minded to new ideas is the attitude he thinks will help all affiliate owners implement a successful new normal in the near future.

Other CrossFit affiliates are embracing the idea of running a 24-hour gym through HybridAF, a company that works with the insurance provider Affiliate Guard to install access systems to provide 24-hour access to members, seven days a week.

Currently, HybridAF works with 126 member gyms in the United States, Canada, Australia, the UK and Germany, 105 of which are CrossFit affiliates. They have also picked up six new affiliates in the last few weeks as more and more gyms prepare to reopen their doors.

Hybrid AF’s management software also allows gyms to control and limit the number of people who can access the facility at any given time, based on their state regulations, Steed added.

Dave Rubin, the owner of CrossFit Durham in NC said the 24/7 option is about to become even more valuable to his members.

Proceed with no facility at all?

“Today, the Manitoba government essentially killed the existing fitness industry in this province,” wrote long-time CrossFit 204 gym owner Mike Warkentin on his gym’s blog earlier this week. Warkentin believes the policy announced in Manitoba, Canada will likely kill a lot of gym businesses, as gyms and fitness centers are part of what the government plans to keep closed until “future phases” of re-opening, beyond Phase 2, which will begin June 1 at the earliest.

Reading between the lines, Warkentin’s take is as follows: “So that means, at best, gyms might only be allowed to open in very late June or early July—with restrictions that will make their profitable operation almost impossible. Any small spikes in Covid-19 cases will cause our government to put the brakes on the plan, so I’d be surprised to see gyms open before fall,” he wrote.

Though the new landscape might not include a physical gym, “fitness will live on,” Markentin said. It will continue to live on in the online space.

They key to being successful in this sphere: A good coach and a smart training program, Warkentin argued.

Warkentin isn’t the only gym owner who sees a potential future in Zoom classes and various at-home programming services beyond May, either as their own service or in conjunction with other in-person services once gyms do re-open.

Other gym owners reported they have been focusing on improving their Zoom class production value each week, with the expectation that it might become a more long-term option for their clients. Two other owners we spoke with have started offering online corporate wellness group classes with the intention to continue this online service even when they open their gym. And in Grand Cayman, 75 percent of Carl Brenton’s members at 7 Mile Strength and Fitness expressed in a survey that they “would like to do a combination of in-gym and Zoom” as a long-term plan.

The bottom line: It’s an uncomfortable and scary time for any business owner, but it’s also providing new opportunities for the fitness industry. With a little innovation, open-mindedness and outside of the box thinking, there might even be a chance to improve upon previous practices, Hurst said.