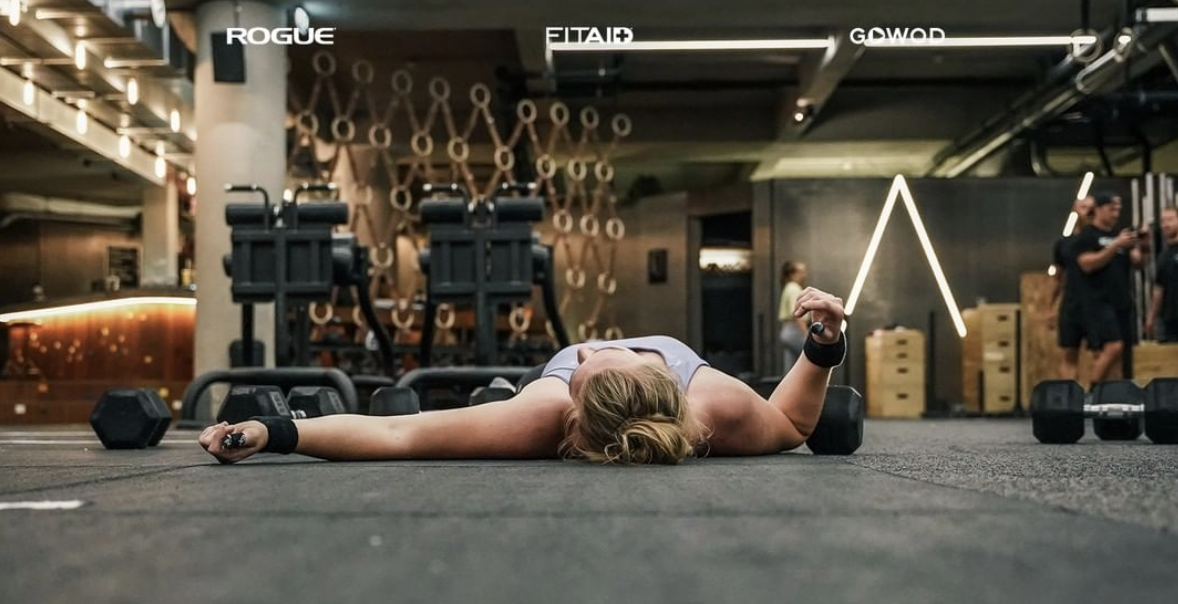 The CrossFit Lowlands Throwdown is one of three competitions tackling the first week of virtual programming provided by CrossFit for athletes participating in the five COVID-regulated competitions over the next two weekends.

On day one there are two tests, one old, and one new. Friendly Fran, a throwback to last Fall’s Stage One of the CrossFit Games is the test individual athletes took on first. Following that was a workout that looked long on paper (25 minute time cap), but that a majority of the athletes needed far less time to complete.

The teams also faced two challenges, the first of which demanded all four athletes to do synchro work for all 135 reps of the workout. The second forced teams to work as pairs (men first, then women) to complete synchro work with dumbbells and GHD sit-ups. Note that all of the team workouts this weekend echo the individual workouts in some way.

Largely unknown German athlete, Mortiz Fiebeg, occupies the top spot for the men. He’s not entirely unfamiliar to this competition though, Fiebeg placed 13th at the Lowlands Throwdown in 2019. He’s 26 years old, was 6th in Europe in the Quarterfinals, but was only 174th worldwide in the Open. He’s a slightly bigger athlete, weighing in at over 205 pounds, so a good performance on Friendly Fran (2nd place) could bode well in terms of good things to come for him this weekend.

Six of the next seven spots are occupied by names most expected in the top ten:

The other lesser known name near the top is France’s Guillaume Briant. He was 46th in the Open, and 18th in the Quarterfinals. His solid performance on Friendly Fran makes sense given his 29th finish worldwide on 21.3.

The second fittest man after Quarters, Simon Mantyla (14th), and Poland’s Bronislaw Olenkowicz (16th) are two athletes to keep an eye on tomorrow, particularly Olenkowicz with a potential event win coming on the Snatch ladder.

The day end results are pretty much as expected on the women’s side through two events:

Behind those four are a handful of Games hopefuls who could not be happier with how day one went:

Popular picks to be near the top of the leaderboard, Karin Freyova (12th) and Tayla Howe (15th), will need to make a move on day two if they want to reassert themselves into the Games conversation.

A perfect two for two on day one leaves Team CrossFit Holistic in the top spot. This Swedish team lead by Marcus Erixon is one of the team’s many expected to do well, but winning the first two events is a dream start either way.

CrossFit Nordic, who was missing one of their top athletes for the Quarterfinals, is thirty points behind in second place. Not far behind them are Denmark’s Aarhus CrossFit and Poland’s team Genius.  Great starts by both teams establish them as top five threats throughout the weekend.

Team Butcher’s Lab T-Bone probably did not get off to the start they expected on day one, sitting in ninth place is not what they had in mind, especially with so much synchro work on day one. Look for them to make an aggressive move on the second day.

The big picture: It’s only day one, but with one third of the test done, a significant part of the story is already being told. The dynamic of workouts changs a little bit for both individuals and teams on day two. Some athletes will have to take risks after poor day one results. However, with most of the top spots already occupied by some of the pre-competition favorites, room for massive jumps may be at a premium in the Lowlands Throwdown fields.