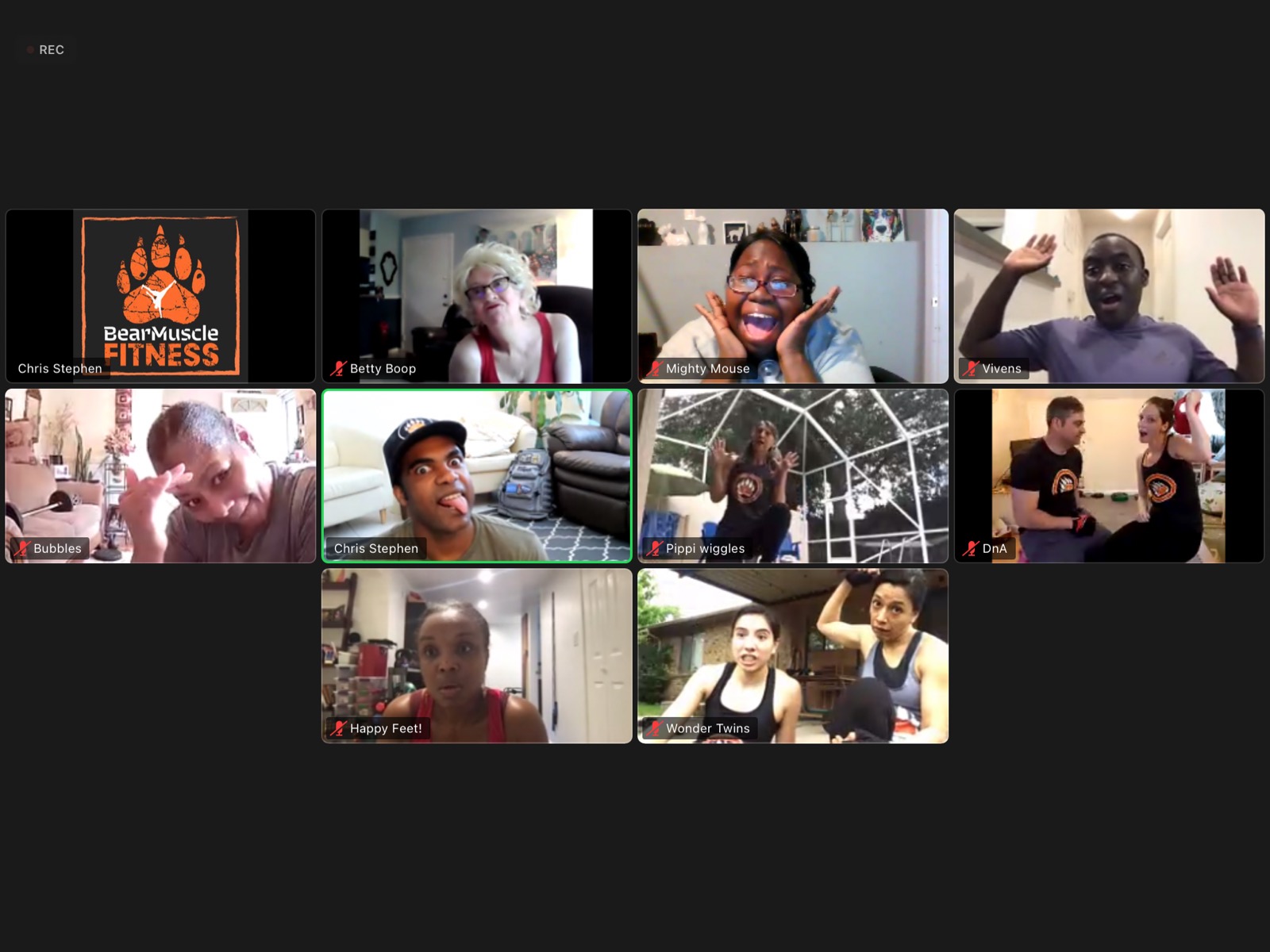 When COVID-19 first hit and gyms closed in the spring of 2020, CrossFit Level 3 Trainer Chris Stephen quickly hopped on the Zoom train and started offering live group classes to a small group of family and friends training from home.

More than a year-and-a-half later, the group has turned into an official YouTube Channel—BearMuscle Fitness—with 200-plus devoted members from all around the world, including women in their 70s, teenagers and a handful of adaptive athletes, most of whom are doing CrossFit for the first time in their lives.

Stephen’s, who also speaks fluent Portuguese, as well as some Spanish and French, was surprised how fast word of mouth alone attracted new people to his program. Before he knew it, he was servicing clients in every single continent through his three-times-a-day live online classes.

And when gyms opened back up, the demand didn’t stop as he thought it would. Though he had limited time, as he had returned to coaching in-person and programming for two affiliates in Florida—CrossFit VICE and CrossFit Riptide—he didn’t want to abandon his newly-formed online community.

“What do we do with this community?” he asked himself.

He decided to record his Zoom classes for his members to follow on their own, and what happened next surprised him. His community had become accustomed to training together, so groups started to “pop up on their own,” turning themselves into morning groups and evening groups, who continued to train together using his pre-recorded videos.

“The group is now organized into multiple classes per day, six days a week with friends logging in all over the world training (together),” said Stephen, who now also releases entire episodes that include a 36-day programming cycle.

One big thing: Since the beginning, Stephen has been committed to offering his group classes free of charge, as it was simply a way to help people he cared about.

Today, his Monday, Wednesday, Friday workouts continue to be free for anyone interested in trying CrossFit from home, and he offers a more premium paid service with additional programming for those who want it. Further, two dozen or so people who started in the Zoom classes now also pay for one-on-one coaching with Stephen.

Not about the money: The most rewarding part of the last 18 months, Stephen said, is the generosity he has witnessed, and the many people whose lives have benefited from this generosity.

Today, BearMuscle Fitness has a group of 50 volunteers who help with various community-building tasks, from hosting group workouts to editing videos and episodes.

“It has warmed my heart,” he said. “I’m just so impressed by everyone pitching in because they feel like this is such an important mission, an important movement that’s helping so many people.”

“There have been families who have been saved by it because they have started to do the exercises together, and some of them have had chronic conditions…And others who have been battling with mental health issues, like depression and anxiety, and are like, ‘This is the most important thing to keep me sane,” Stephen said.

And then there’s the woman in her 70s who has increased her strength and bone density and can now lift 50 pounds over her head, and the woman who has had multiple surgeries in recent months, whose doctors say her recovery is so much faster than it used to be. Or the member who started the Zoom classes from her hospital bed.

“She has taught the most about how to make this program adaptable to everyone,” Stephen said, adding that she has lost “so much weight,” he said.

“I could go on all day… It’s just amazing to see how many lives have been changed, or saved because of this,” he added.

Since Day 1, Stephen’s goal has simply been to show as many people as he can what CrossFit can do for them. Whether this means they remain in his program doing CrossFit from home for the long-term, or they move on to train at an affiliate one day, as some people already have, doesn’t matter to him.

“I want to just raise awareness of what CrossFit can do (for) you…It’s not like I’m saying remote is better, or in-person is better,” he said.

That being said, he is hoping to continue to grow BearMuscle Fitness even in the post-pandemic world, as it has been a great way to onboard new people into CrossFit who were otherwise too scared to try, he explained.

“Yeah I want to see it grow to 300, 400…thousands…I do want it to grow, because the more people who participate in this (means) the more people who are making positive changes in their lives and understand that, yes CrossFit can do that for you,” he said.