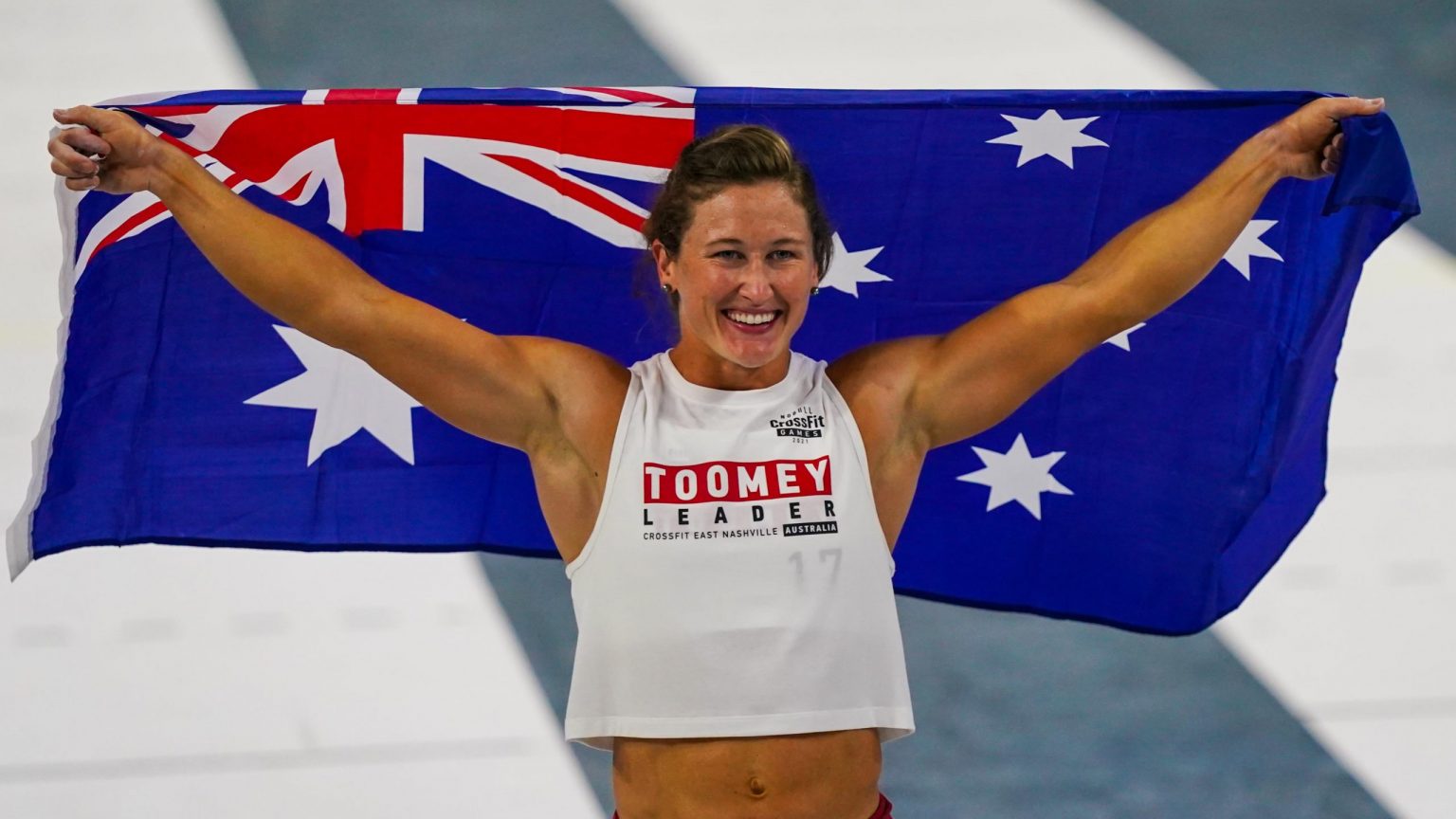 The Oceania region consists of 14 countries but in the case of CrossFit, Australia and New Zealand reign supreme. This point is further driven by looking at the leaderboard of the Oceania Quarterfinal which concluded this past Sunday and is still awaiting finalization. Here are five takeaways from looking at the unofficial leaderboard.

1. Tia doing Tia things. Those who were looking for a dip in Tia-Clair Toomey’s performance after taking time away to train in the bobsled for a qualifying run to the 2022 Winter Olympics greatly underestimated the fitness of the five-time reigning and defending “Fittest Woman on Earth”. After just missing out on winning her second-straight Open, she not only laid waste to the Oceania Quarterfinal field but the whole Quarterfinal field in its entirety.

She was the only athlete, man or woman, to finish with a single digit point total in their respective Quarterfinals. She won three of the five workouts and placed second in the other two, the only athlete to do that worldwide. Her feat is more impressive when compared worldwide. She was the only athlete to record top-10 finishes in every workout with her worst finish being seventh in Workout 4, the “Other Total”. Even more impressive was that her closest competitor both in her Quarterfinal and Worldwide was her fellow Australian Kara Saunders who finished 107 points behind Toomey in the worldwide leaderboard. Toomey’s average place finish on the worldwide leaderboard was 3.6, the next best average was Saunders with 25th.

Tia-Clair Toomey was the only athlete, man or woman, to record top-10 finishes in every workout.

Speaking of worldwide results in the Quarterfinals. Since the start of this stage of the Games last year there has been a total of 10 workouts, Toomey has finished in the top-10 in all but one workout and has won three of them. In her career, her average Quarterfinals workout finish is 12th with her 87th worldwide finish during Workout 3 of the 2021 Quarterfinals being the outlier.

The scary thing is that she’s probably not close to peaking and all indications are we might be seeing the most dominant version of the champ. That’s almost hard to fathom to think about considering how dominant she has been so far in her career.

2. Who’s the King of Oceania? The men’s side of the Oceania Quarterfinal has one of the tightest races among the six regions with the returning Ricky Garard edging out the region’s champion from last year Jay Crouch by three points. It’s no secret that Garard’s goal is to win the CrossFit Games this year, however the rest of the field in Oceania isn’t ready to let him.

Despite Garard holding a sizable lead over Crouch on the worldwide leaderboard, Crouch is still the three-time defending “Fittest” in Australia and Oceania. At just 23-year old, the Rob Forte protege has no intention of going anywhere anytime soon, especially after getting a taste of Madison as an individual competitor last year when he placed 22nd.

Also on that list is three-time Games athlete Bayden Brown who placed fourth in the Quarterfinals. Brown placed a career-best 17th at the Games in 2021 and is an athlete who performs well in in-person competition.

Like Brown, you can’t dismiss other veteran names on the leaderboard even though they didn’t have the best Quarterfinal performances. Names like Matt McLeod, Royce Dunne, Forte and James Newbury. We haven’t heard from McLeod since the 2019 Games where he placed seventh as a Games rookie. Dunne has been a staple of the Australian CrossFit scene, last year’s Torian Pro Semifinal had the highest finish of the men athletes from Oceania at the Games, placing 16th but despite finishing 11th in the Quarterfinals cannot be discounted. Newbury placed fifth at the 2019 Games and just missed qualifying for the Games the last two seasons as injuries as well as other interests has him trying to regain his place among the best in the region.

Garard is certainly the favorite heading into this year’s Torian Pro Semifinal after his Quarterfinal performance to be the person to beat but this region’s top athlete is far from decided.

3. Who’s left out? I’ve stated before that there will be a woman in the Oceania field that will be sitting at home that should be competing at the Games. The same argument could be made for just about any region however Oceania has potentially four to five athletes who just wouldn’t show up, but contend for a top-15 spot at the Games if not higher.

With just three Games spots available for them in their respective Semifinal, the Quarterfinals has shown us that there are some names outside of Toomey and Saunders who will be battling for the third and final spot.

Two names jump out in particular, Ellie Turner and Jamie Simmonds. Turner made her first Games last season after earning the final spot at the Torian Pro. After finishing 26th, the DEKA COMP athlete has committed herself to returning to the Games by making the move to Canada to train under the watchful eye of her coach Michele Letendre. That led to a breakout performance against a star-studded field at Wodapalooza in which she led the women’s division for three days before finishing sixth. She followed that with seventh place finish in the Open and a third place finish in the Quarterfinals.

Simmonds from all indications looks healthy after a shoulder injury kept her out of the 2021 season. The native of New Zealand and five-time Games athlete is just over two years removed from her podium finish at the 2019 Games. She placed 10th in the Open this year and had a strong start to the Quarterfinals with three-straight top-5 finishes before struggling in the “Other Total” and the final workout which featured heavy snatches resulting in a sixth place.

Games veterans Maddie Sturt and Laura Clifton will also make a push for that third and final games spot.

Whoever finishes outside of the top three I would expect to be a serious contender to take one of the two spots in the Last Chance Qualifier, they will just have to work harder for their Games invite than the others.

4. Young Kiwis. New Zealand is the second most populous country in Oceania and has produced some high-level CrossFit athletes on the women’s side including Simmonds, Clifton and Alethea Boon. The face of the men’s division has been Luke Fiso who has been the “Fittest” Kiwi for the last six years. This year a new crop of Kiwis has stepped up in the absence of Fiso who is not competing this year.

Bayley Martin leads that group at 22-years old. He placed third in the Quarterfinals with impressive performances especially the final two workouts, placing fifth in the “Other Total” with a total weight lifted of 1,042 LBs and ended the Quarterfinals with a second place in Workout 5 with a time of 2:47, tied for the 46th best in the world.

His younger brother, 20-year old Riley Martin is a two-time Games athlete in the teen division and has shown the same capacity for strength as his older brother with his best finishes being in Workouts 4 and 5 of the Quarterfinals. He sits in 10th with his first trip to the Torian Pro to compete alongside his brother on the horizon.

The Martin brothers aren’t the only set of Kiwis that look to make a name for themselves and represent their flag at the Games. Luke and Ben Fowler are looking to take over the mantle that Fiso has left vacant and also move onto the Games. Ben is the younger brother and finished fifth in the Quarters. Ben actually was the leader after Day 1 thanks to a fourth place finish in Workout 1 and a win in Workout 2 with a time of 7:35, the 40th best time in the world. The 22-year old Luke started off strong with a second place finish in Workout 1 helping him to 15th on the Ocreania leaderboard and giving the Kiwis four athletes in the top-15 with all of them under the age of 22.

5. Gap Years. We profiled Brandon Swan earlier this month who is stepping away from competing at the Games this year to pursue a career as a firefighter. This continues a change in course in the life of the four-time Games veteran.

He became a father and during the pandemic he started a workout program called “Dad Hours”, geared to those who live a busy lifestyle to get fitness in. It appears that program works as he matched his sixth place finish from last year’s Quarterfinals despite not training as a full-time athlete. Due to the firefighters academy, Swan will not be able to train for Torian Pro Semifinal, ending his 2022 season after an impressive Quarterfinals run.

Fellow Aussie and close friend Zeke Grove will also not be moving onto the Semifinals, the first time since 2014 the four-time Games athlete will not be competing for a spot at the Games. He pulled out of the Quarterfinals after two top-20 finishes in the opening events and announced he was no longer competing.

However, both athletes have intentions of competing next season and don’t be surprised to see both of them competing near the top of the leaderboard in the Quarterfinals once again.