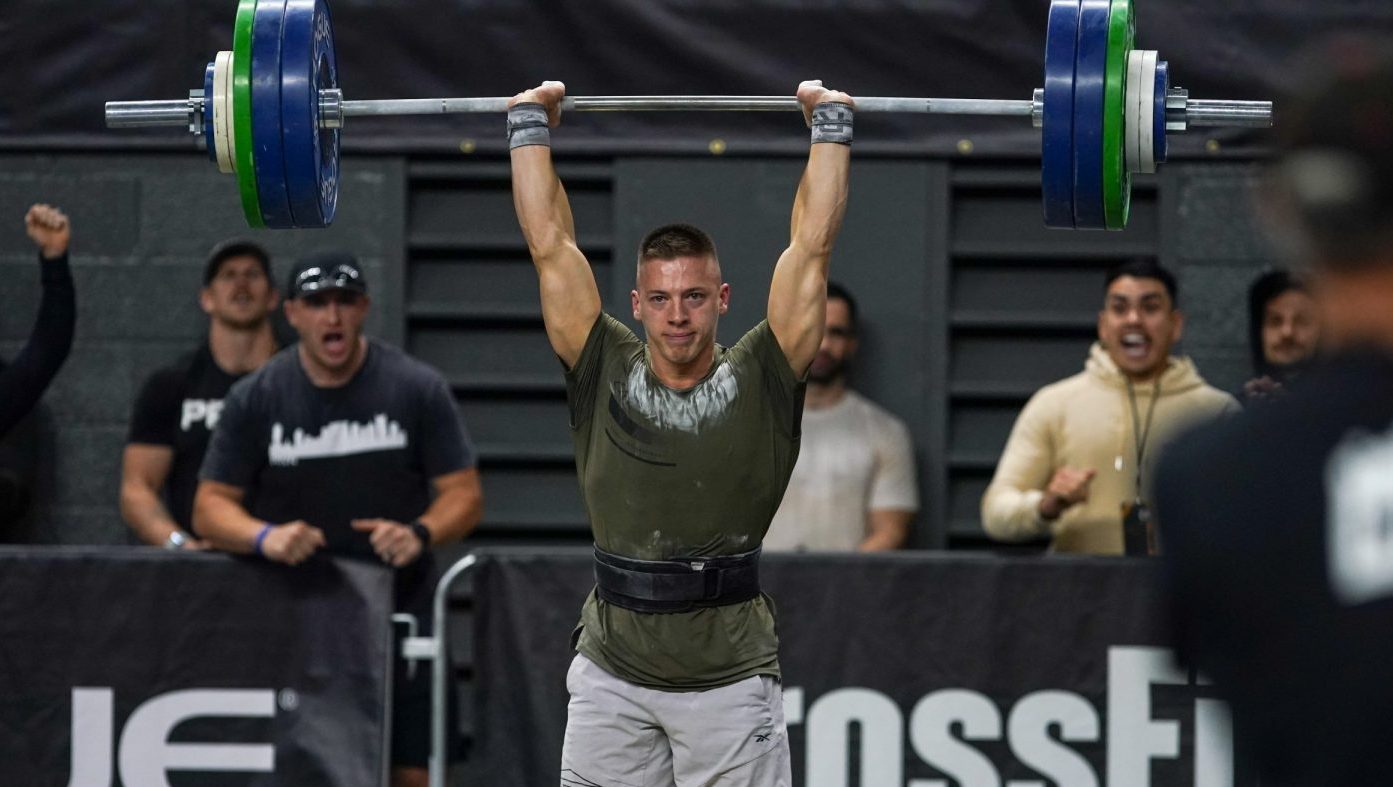 Day 1 of the MACC, like the Syndicate in week one, featured the Barbell Complex and Team Snatch Ladder as the opening event. We saw last week what can happen in terms of scrambling up the leaderboard after day one when a singular strength test accounts for half the available points. Keeping that in mind, let’s take a look at how the leaderboards are shaking out, who’s got some ground to make up, and which athletes and teams are feeling good after an exciting opening day in Knoxville.

For two athletes in the men’s field today it was a tale of two workouts; 2021 MACC 5th place finisher, Zach Watts, opened up with a tie for first event one win, but struggled and took a 28th on event two. In the meantime, perennial Games athlete Noah Ohlsen missed both his second and third attempt at the barbell complex and took an underwhelming tied for 19th. He bounced back with this place in Midline Sadness and finds himself within striking distance in ninth.

While Watts and Ohlsen had up and down day ones, Saxon Panchilk seemed to execute both workouts perfectly. He put up 325lbs in the Complex to tie for fifth, and methodically reeled in Ohlsen and Dallin Pepper for the event win to close out the day. Speaking of Pepper, he also hit 325, and finished second to Saxon in event two and sits four points behind him in second overall.

The surprise of the day for the men has to be Nick Thomas. He’s a former team athlete from six year ago and has some experience in the military. He also happens to be amazing at squatting, hitting 330 and taking a tie for second on event one, and blitzing the last set of overhead squats in event two to overtake several athletes for an eighth place finish. There are a huge host of dangerous men just outside of a qualifying position who will be looking to take that spot away from him. How he handles being in a heat with all of them tomorrow will go a long way towards seeing where he winds up when Sunday ends.

Tyler Christophel and former teen athlete Luis Oscar Mora are fourth and fifth after impressive day ones. Mora reid watts for the event win on the lift, while Christophel took a fifth and seventh for a steady day one. They, like Thomas, will need to continue to execute well in this incredibly deep men’s field.

The fireworks for the lifting event in the women’s field came in heat one where not one, but two, of the strongest lifters in the field were seeded. There was a bit of a back and forth between Callerina Key and Kyra Milligan, but ultimately Key was able to power clean her way to a heat and event win by clearing 235 pounds and earning 100 points. Milligan’s 225 was good enough for a tie with Keara Napoli and Sydney Michalyshen.

If you’re a Brooke Wells fan, event two had to bring a smile to your face. She came out on with an impressive cycle rate on the GHD sit-ups and hung on for the event win despite a hard charging Danielle Brandon in rounds two and three. Finishing third in this one, after taking a tie for fifth on the lifting was Shelby Neal. We had our eyes on her prior to the start of competition as a wild card athlete to watch in this field, and through two events she has not disappointed.

Wells and Michalyshen are tied on points in first with Wells holding the tie break. Neal is third. Faith Ferguson sits fourth on the back of fifth and ninth place event finishes, and finally Brandon occupies the five spot at the end of the day.

Look for Mayhem Athlete, and 2021 Games athlete, Baylee Rayl who is currently seventh to make a push for the top five tomorrow.

It may come as no surprise that Mayhem Independence is in first at the end of the day, but it certainly wasn’t straightforward. A few teams, namely CrossFit Shoofly Storm Squadron and Koda CrossFit Iron View Allegiance put impressive lifting totals up in the Complex. Sasha Nievas was the last lifter of the day for any team however and hit a silky smooth 200 lb snatch to take the event win by five pounds.

All three of those teams backed up the heavy lifting with some impressive synchro work on event 2, but none of them were able to beat the number two seed entering the weekend, Kamo Athletics CrossFit who edged out Independence by a single rep to earn 100 points at move into fifth place at the end of the day. The four aforementioned teams, plus CrossFit Kilo II, currently occupy the qualifying spots, but they are by no means safe. The four teams occupying the six through nine spots in the leaderboard all have high hopes for the Games as well and will be looking to shake things up over the course of the next two days.

Bottom Line: If you didn’t get a chance to watch the MACC on Friday, don’t miss Saturday. All three divisions are set up for major changes in the leaderboard after each and every event.