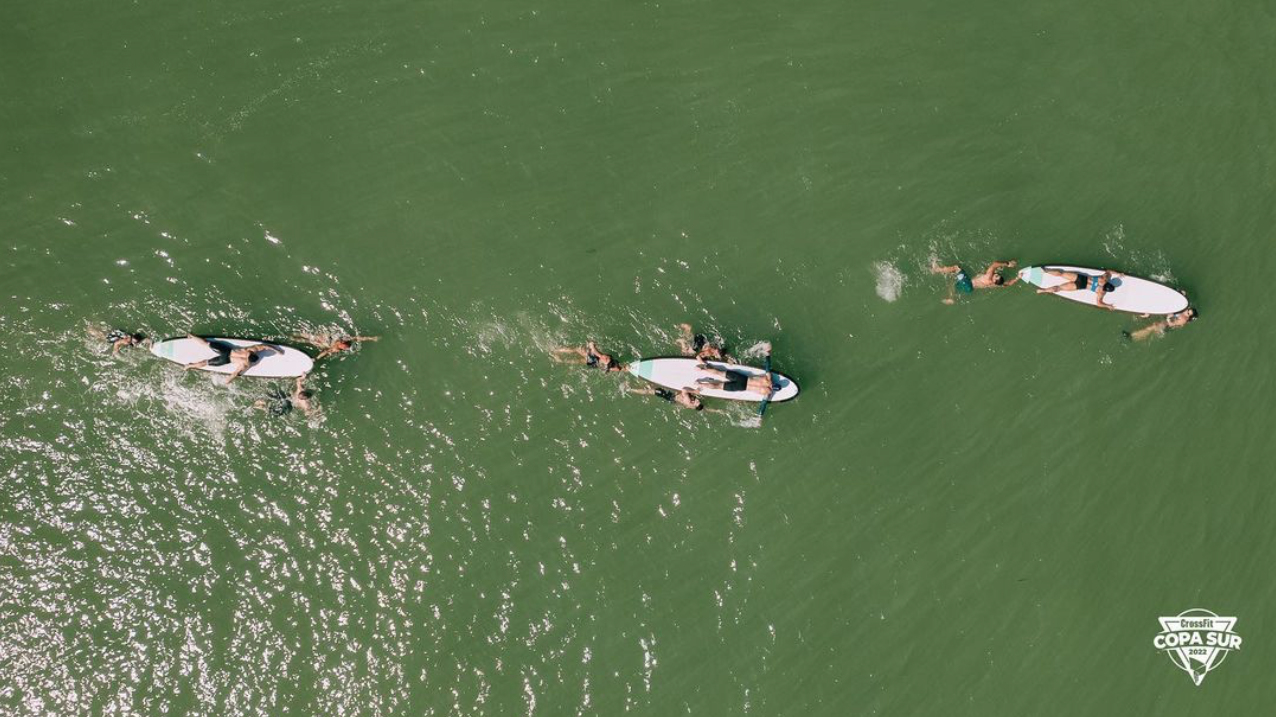 Day 1 of the CrossFit Copa Sur Semifinal featured some exciting action, resulting in some close races to end the day. The highlight for the athletes was the final event of the day which featured the first open water swim in a Semifinal competition. With a total of six NOBULL CrossFit Games invitations on the line (two each for each division), the first day of competition was key in setting the tone for who will represent South America at the Games in August.

Bem vindo ao Brasil (Welcome to Brazil): With apologies to all the other Semifinals it appears that the organizers of the Copa Sur might have created the most aesthetically pleasing setting. The organizers built an outdoor competition floor from scratch with bleachers just outside the popular Shopping Vitória Mall and a softball throw away from the warm Atlantic Ocean waters.

The opening event took place in front of a raucous crowd of over 1,000 people who were cheering on their favorite athletes, none more Guilherme Malheiros who played to the crowd when he won the first event of the day.

That crowd moved to the running course and beach to continue cheering on their favorite athletes. The palm trees lining the running course leading the athletes to the beach is something that differs from what other Semifinals offered, the rest o whom were indoors, besides the Granite Games.

The organizers have received much praise for their programming, one that promises some fireworks in the final event where the crowd is expected to sell out the venue.

A tie at the top: Looking at the top of the women’s leaderboard are two athletes who were not expected to be there. Andreia Pinheiro and Laura Gonzalez-Marin are tied for the lead with 172 points. Pinheiro recorded two top-5 finishes in front of her Brazilian countrymen and women. At 39-years old, Pinheiro is the second oldest athlete in the women’s field and came into the Semifinal ranked 15th in the field based on her Quarterfinal finish.

Gonzalez came into the Semis ranked 21st after Quarterfinals and is seeking a return to the Games. In 2019 she competed in Madison as Venezuela’s national champion and last year struggled at the Brazil CrossFit Championship, placing 19th in the online competition.

She recorded a second place in the Run-Swim-Run event, finishing with a time of 32:03.

Not too far from the Day 1 surprise leaders is Victoria Campos, who is just four points behind and four points behind Campos is Julia Kato. Both women are considered the Games favorites and are within striking distance to make a run for the lead on day 2.

Gui’s new bag of tricks: Much was made of Malheiros making the move from Brazil to Cookeville, TN to train with Rich Froning and the Mayhem camp. The 22-year old is potentially the most gifted athlete in the men’s division. Already blessed with top-end strength and speed, the seventh place finisher from last year’s Games had holes in his fitness that he hoped the move would shore up.

One of those holes was his aerobic capacity, specifically in workouts that had a time domain of over 10 minutes. He struggled in those workouts at the Games, including the swim-kayak event, placing 22nd.

He answered the questions by winning the Run-Swim-Run event on Friday with a time of 28:39. When Malheiros first did the event as a 17-year old at the 2017 Games he placed 18th in his division with a time of 39:46.

The Brazilian easily won the opening event of the day, “Chipper 22”, winning by :52 seconds over his closest competitor, giving him a 32-point lead after day 1.

With Malheiros expected to sweep the “Barbell Complex” and “2015 Regional Workout 5” events set to take place on Saturday, the Brazilian puts himself in position to match Tia-Clair Toomey in becoming the only athlete to win all their Semifinal events.