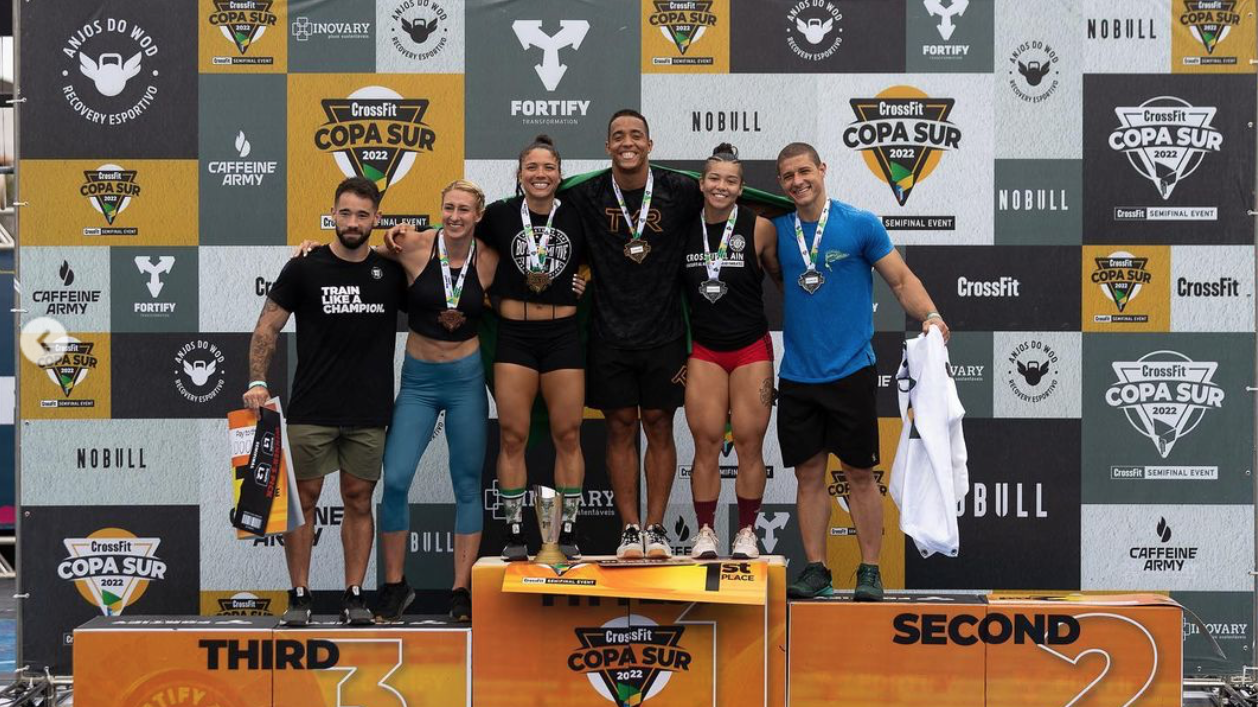 The inaugural CrossFit Copa Sur Semifinal came to a close on Sunday with little intrigue but a lot of excitement thanks to an elimination-style final workout that kept the capacity crowd packed into the Shopping Vitória Mall outdoor stadium buzzing after the final horn was blown.

The end result was four native sons and daughters from Brazil continuing their 2022 NOBULL CrossFit Games, including three making their first appearance, and Argentina and Brazil sending a team of representatives to Madison, WI as well.

Guilherme Malheiros won his first live, in-person major CrossFit competition in runaway fashion as the 22-year old Brazilian showed he deservedly earned the distinction to be called a podium contender.

Campos has been competing in CrossFit since 2014 when the Brazilian was living the expat life competing in competitions throughout Australia and Asia.

A three-time Pacific Regional qualifier, she came up short in her Games dreams continuously including last year when the 29-year old placed third in the online Brazil CrossFit Championship Semifinal. That finish qualified her for the Last Chance Qualifier and another shot at the Games but it wasn’t in the cards as she placed 12th.

In December she made the move to Cookeville to train full-time with fellow Brazilian Malheiros and the Mayhem training camp. The results of that move included the best Open finish of her career, 64th worldwide, and becoming her country’s national champion.

None of the previous stages mattered this weekend despite being considered one of the favorites. In a tough and volatile women’s field, she was the most consistent, and consistency often wins in the lack of dominance.

She was the only woman to record top-10 finishes in every workout, capping off her weekend with an event one in the finale.

The long journey for Campos has stretched from the beaches of Australia, the crowded city of Hong Kong, the Bison fields of Cookeville and finally the coastline of the Atlantic in Brazil. That journey was replicated in a way in Vitória as she never had her Games invite secured until her win in the final event, she never held the overall lead until the end of workout 5 on Sunday. The near misses, the journeyman lifestyle, none of that matters now as she can call herself a champion and a Games qualifier.

Not much is known about Copa Sur men’s individual runner-up Pedro Martins. What we do know is that no one outside of himself and his support staff thought he would be making travel plans for Madison at the conclusion of Sunday.

The 32-year old showed that being consistent across the board will lead to desirable results. He placed in the top-10 in every event, something that even the champion Malheiros couldn’t lay claim to. He never placed better than fifth place in any event but collected three of those finishes to keep him in the mix as the other favorites in the field dealt with inconsistencies.

His fifth place finish in the “Last One Standing 22” event allowed him to hold-off a surging Agustin Richelme, one of the field’s favorites, he placed fourth but couldn’t gain enough points due to Martins consistency across the three days of competition.

Just like Copa Sur, he will head into the Games as an underdog and longshot to contend. He has the worst Open placement in both the men’s and women’s field at the Games, placing 3,963rd worldwide.

None of that matters though for Martins, for today and for the rest of his life he will be known as a 2022 Games qualifier.

Making their return to the Games for the second-straight year is Q21 CrossFit out of Argentina. One of the more experienced teams in South America, the team of Sabrina Dellagiustina, Gonzalo Duro, Agustina Haag and Matho Vizcarra, was able to capture the South American Semifinal title that eluded them last year.

They were simply dominating as they won four of the six events enroute to a 115 point victory over runner-up CrossFit Ribeirao Preto. They were in another class, in two of their workout wins they finished over a minute ahead of their closest competitors.

How their resounding victory translates into a Games performance is unknown but the hopes for the team is another year of experience and keeping the same team intact will lead them to  improve on their 36th placing from a year ago.

Six individual athletes will now move onto the Last Chance Qualifier. Places third through fifth receive invites to the LCQ.

The aforementioned Richelme makes what was already a tough LCQ field even tougher. He does head into the bonus stage as one of the favorites however due to his Games experience and success in online competitions.

Fellow Argentianian Nicolas Bidarte made a push on the final day, moving from ninth to fourth to secure his LCQ spot. Last year’s South American Quarterfinals champion also does well in online competitions.

The final LCQ spot goes to Brazilian Lucas Da Rosa. Da Rosa competed at the Games last year as a team member of the CrossFit Al Ain team out of Dubai where he still trains out of. He has individual experience however, twice competing at the Latin America Regionals and last year in the Brazil CrossFit Championship which was held virtually.

For the women, Ecuador’s Claudia Espinosa was 14-points shy of a Games invite. Two finishes outside the top-10 cost her valuable points after winning the “Run-Swim-Run” workout to start the competition. The two-time Ecuador national champion improved from her 25th place at last year’s Brazil CrossFit Championship Semifinal.

A pair of young, up-and-coming Brazilians extended their Games season into the LCQ. Amanda Fusuma is 25 years old and improved her Semifinal placing by two spots from last year when she placed sixth, one spot away from the LCQ.

At 20-years old Luiza Marques is considered the future of Brazil women’s CrossFit. A training partner of Da Rosa’s at CrossFit Al Ain in Dubai, she competed on the team at the Games last year. A three-time Games athlete in the teen division, she went individual this season with success, winning the Quarterfinals for South America.

Jun 27 by Katie Gannon
Your Coffee is ready.