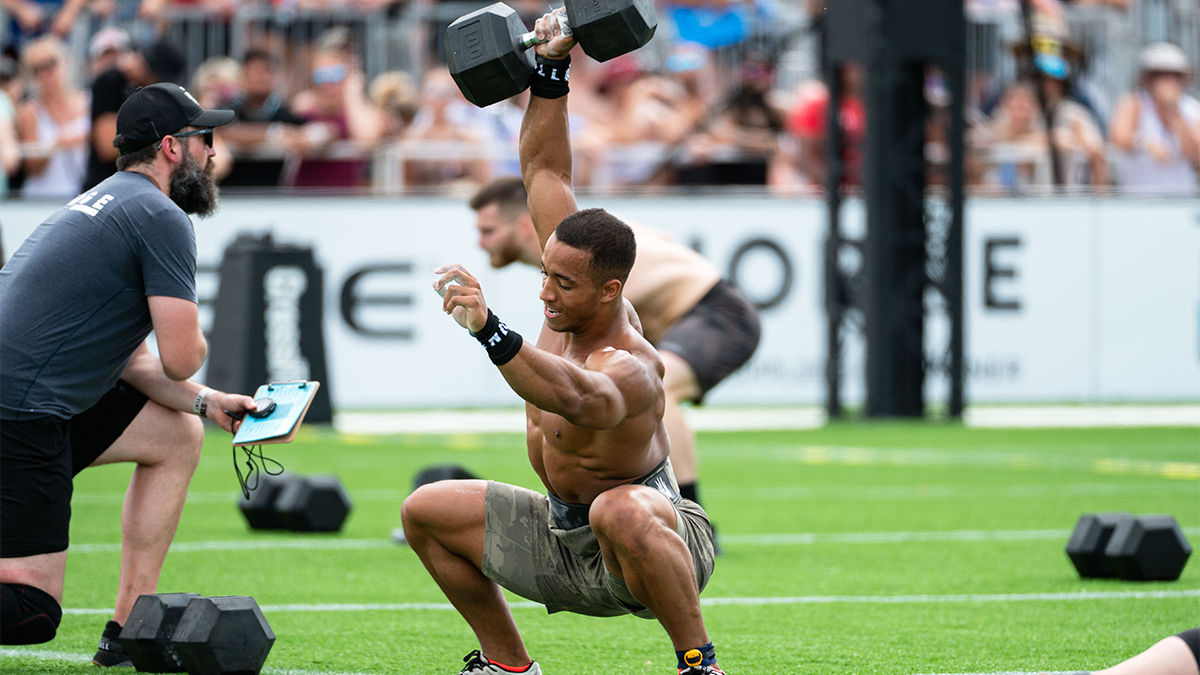 Saturday is moving day at the CrossFit Games and the fourth morning at the 2022 iteration opened in the pool at the Soderholm Family Aquatic Center on the campus of the University of Wisconsin. There were three events on tap for the individuals and teams, and it was the final day of the competition for age groups and adaptive athletes. When the dust settled at the end of the day the individual field was cut to 30 and the teams to 20.

All athletes across all divisions did the same workout, which included (up to) eight rounds of a 50-yard swim and ski erg calories in an ascending rep scheme (8-10-12-14-16-18) the final two rounds were for max calories, each with a two-minute clock. If an athlete failed to complete both the swim and calories within the two-minute timeframe, they were out.

The women were in the pool first in two heats of 20 athletes. In the first heat, all the women made it to the round of 16 calories, but Elisa Fuliano, Seher Kaya and Caroline Spencer failed to move on. Rebecca Fuselier failed on the final round of prescribed calories and missed the last two max calorie rounds. When the final buzzer went off it was rookie Julia Kato who set the score to beat at 124 with Ellie Turner.

In the final heat, all 20 women made it to the final two rounds to amass max calories. Amanda Barnhart and Lucy Campbell were the first out of the pool in the second to last round and stayed tight on the erg. As they jumped into the water for the final swim, Campbell had the calorie lead at 108 with Barnhart two behind and Tia-Clair Toomey three behind. In the last sprint on the machine, Campbell maintained the lead, but Laura Horvath got into the mix. The UK rookie took the event win with 138 calories. Behind her were Barnhart at 134 and Horvath at 133. Toomey, the overall leader, took fourth.

The men were up next and in the first heat all the athletes made it to the max calorie rounds. In the first one, it was Giaulliame Briant and Brent Fikowski, two strong swimmers who were out of the pool first. Rookie Dallin Pepper made a charge on the ski erg to take the calorie lead into the final swim at 118. In the last swim, Briant and Fikowski were first out again, but Pepper kept up his maximum output on the machine. The rookie took the heat winner at 157 calories.

In the second heat, once again all the men made it to the final two max calorie rounds. Jonne Koski and Lazar Djukic were the first two out of the pool with Justin Medeiros and Roman Khrennikov close behind. It was neck-and-neck on the ski erg until close until the end of the two-minute block where Khrennikov took the lead at 120 with Djukic and Kwant just behind. On the final machine sprint for max calories, pulling at 1900 calories per hour, Khrennikov outworked his competitors and took the event win at 160 calories. It was the first in-person Games win of his career. Pepper from heat one took second followed by Koski and then Djukic and Samuel Kwant who tied for fourth. Overall leader Ricky Garard took 10 in the event.

The midday event on day four was an all-out sprint, three rounds with four minutes to rest in-between. In each round the athlete had to sprint down the field, complete 20 wall balls (20 and 14 pounds, but 12- and 11-feet targets), followed by six dumbbell squat snatches with a heavy dumbbell, 100 pounds for the men and 70 for the women, then capped off with a final sprint across the finish line.

The women tackled “Hat Trick” first, with alternating heats–while one group worked the other rested. In the first group, Australian Ellie Turner set a blazing pace at 1:17 in round one. In the second group, Toomey with Mal O’Brien took the best times. In round two, Turner matched her time, again taking the group win. Toomey and O’Brien matched their work from round one, with Toomey legging the youngster out. Amazingly, Turner again matched her exact pace at 1:17, but in the second heat, Toomey faltered, getting hit with several no reps on the wall balls and O’Brien took it at 1:19.

Once all the times were tabulated, Turner won the event, the first in her career, while O’Brien took second and Toomey in third. Toomey hangs on to her overall lead, but surrendered a few points to O’Brien.

The men took on the sprints next with the same alternating heat format. Gui Malheiros set a blazing first time at 1:14 in the first group, burning through heavy squat snatches. In group two, Justin Medeiros took the first round at 1:20 on the back of his solid overhead position in the squat snatches. It was Malheiros in the second round again with a very similar finishing time. The second group, Djukic duked it out with Medeiros, but the reigning champ took it at 1:19, a one second improvement on his first run. In the final round, Malheiros again attacked the dumbbell and once again matched his round time finishing in 1:14. The battle for the overall lead, Garard and Medeiros battled it out, with Medeiros taking the better event finish.

In the end, it was Malheiros with the event win, his first this year, while Medeiros took second and Dallin Pepper in third. Garard finished twelfth, giving Medeiros a eleven-point overall lead heading into event ten.

The final event of the day, under the lights in the Coliseum was the Sandbag Ladder. In the workout, athletes worked their way through progressively heavier sandbags, lifting them to their shoulders. If they couldn’t lift a bag they were out, and if two athletes failed on the same bag they had to complete a tiebreak race with three sandbag lifts. The bags ranged in weight from 160 pounds to 260 pounds for the women and 240 pounds to 340 pounds for the men.

Once again the women took the floor first. All of the women were successful on the first sandbag at 160 pounds. On the 170 pound bag, Rebecca Fuselier failed and would take 37th place in the event. Both Elisa Fuliano and Julia Kato failed at 180 and showed how the tiebreaker would work lifting three bags, one each at 50, 100, and 150 pounds over a yoke. Fuliano won to take 36th.

At 230 pounds, Jacqueline Dahlstrom, Barnhart, Laura Horvath, Sydney Michalyshan, and Danielle Speegle all made the lift, while Brooke Wells failed. There were only three bags left to clear the ladder. Dahlstrom cleared the 240 pound sandbag, along with Speegle, while Barnhart, Horvath, and Michalyshan failed. Horvath won the tiebreak and took third overall, leaving only Dahlstrom and Speegle to attack the 250 pound bag. Dahlstrom couldn’t get the blue bag that outweighed her by 100 pounds and Speegle nailed the lift and took the event win, the first of her career. Toomey took 6th overall and extended her lead overall.

Everyone cleared the 280 and almost the full field took on 290. Colton Mertens, Spencer Panchik, Jay Crouch and Tim Paulson failed and went to a tiebreak, which Panchik won. When the field got to 300, several athletes struggled. Jonne Koski, Giorgios Karavis, Tudor Magda, Enrico Zenoni and Alexandre Caron failed and were sent to the tiebreak, which Koski won.

The crowd was going bonkers as Garard, Khrennikov and Medeiros all hit their lifts at 320. The final two bags were red, and first up was 330 pounds. Saxon Panchik was the first to hit the lift, followed by Fikowski, Malheiros, Nick Mathew, Jayson Hopper, Garard and Medeiros managed to get the bag to their shoulders, meanwhile Houdet, Henrik Haapalainen, Paulson, Vigneault, Ulidis Ulpenieks, Bayden Brown, Khrennikov all failed. Houdet took the tiebreak.

It came down to the last bag at 340 pounds, each one of the final seven men lifting along on the platform. To start, Malheiros made the lift to incredible roars from the crowd. Saxon Panchik was up next and failed, then Mathew hit it. Then Fikowski hit it too, followed by Hopper, but Garard failed and joined Panchik in the tiebreak. Medeiros took the floor but couldn’t make the lift and it gave Garard a chance to gain some points on the leader. Medeiros took the race and added six points to his lead heading into the final day.

Then they brought out another bag at 350 pounds. Malheiros missed, then Mathew missed, then Fikowski missed, then Hopper failed. They all headed to one final tiebreaker. In an exciting finale, Mathew and Malheiros tied in the tiebreaker, both taking first in the event.